Baseball fans love their stats. We devour them, dissect them, and build our fantasy rosters around them. Each week of the 2021 baseball season, we will be gifted with another statistical sample size of pitches, plate appearances, and playing time. Knowing it often takes hundreds or even thousands of pitches or batted-ball events for trends to normalize, how should fantasy managers adjust to the ebbs and flows of weekly player performance?

Each week during this season, this piece will look at trends that have emerged over the past week and determine if it is signal or noise moving forward. What is prescriptive in helping build winning fantasy teams and what can be ignored as small sample size noise? Hopefully, we can make sense of what has just happened to help us make smarter roster and free agent budget decisions.

Let's take a look at some of the data from the seventh scoring period of the fantasy baseball season.

At the end of his game on May 5th against the Oakland Athletics, Cavan Biggio ended the day as one of the absolute worst offensive players in the league. His triple-slash line stood at a putrid .179/.286/.286. He had five RBI and zero stolen bases in 25 games and had begun to find himself in the eighth spot in the lineup.

Fantasy managers who took a chance on the on-base abilities and speed of Biggio went into full panic mode.

Hopefully managers didn't jump ship because he has been roaring back since then.

Since that time, Biggio has bumped his average 35 points, his on-base percentage 50 points, and his slugging percentage over 100 points, chipping in 2 steals, 8 walks, and 5 RBI for good measure.

In fact, Baseball Savant rates Biggio's last 50 plate appearances as the second-best improvement of all Major League hitters in that span. 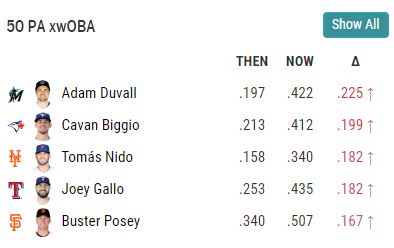 Biggio is never going to be the line-drive machine his Hall of Fame father was, but we should be able to count on Biggio for elite on-base skills and plenty of runs and stolen bases in the potent Toronto Blue Jays lineup the rest of the year.

While he may not come close to reaching 20 home runs this year as some predicted, it is worth noting his average exit velocity is up more than two miles per hour over last year, mainly driven by his success the last two weeks.

Even though the buy-low window on Biggio may have begun to close, his elite metrics, on-base percentage, and speed in a high-scoring offense make him a target. It may be worth seeing what his manager would want in a deal.

If you browse the FanGraphs leaderboards for best pitch values this year, you will see a lot of big names when you check out the best changeups.

In the top 20, you have John Means and his ascending profile on top and then familiar faces such as Gerrit Cole, Julio Urias, Max Scherzer, Jacob deGrom, Lucas Giolito, Zack Greinke, and Joe Musgrove.

But one name really stands out: Ian Anderson has the third best changeup in the Majors this year.

At just 23 years old, Anderson flew through the minors -- pitching only 26 games between AA and AAA ball -- and is paying dividends already after the Atlanta Braves spent a third-overall pick on him in 2016.

Can the success continue for such an inexperienced pitcher -- especially in one of the tougher divisions in baseball? The answer may depend on how often Anderson relies on the changeup.

Anderson's other two pitches are his four-seam fastball (which he throws 47.5% of the time) and his curveball (20.1%). The fastball is going just fine, ranking 25th in pitch value out of 60 qualified starters.

His most similar comp for that pitch is Dylan Cease, so you're looking at a very good, not great, pitch. But it's certainly getting the job done.

The curveball, on the other hand, is most certainly not.

For as good as Anderson's changeup has been, his curveball has been just as bad. There are 56 qualified pitchers who throw a curveball, and Anderson's ranks 54th with -2.5 runs saved above average on the pitch.

In essence, the pitch is a net negative to his team and their opportunity for a win. Anderson's dilemma is he does not presently possess another pitch. He threw a sinker 0.4% of the time in 2020 but has abandoned that experiment.

Starting pitchers typically can't rely long-term on just two pitches, so Anderson either needs to get the curveball working or develop another pitch.

The short-term answer, however, may just be to start throwing a lot more changeups. Anderson's version of the pitch has the 13th-highest velocity (88 miles per hour) and the 7th-largest vertical movement, according to FanGraphs. This season, batters have only been able to put up .158/.284/.175 numbers against the pitch (compared to .276/.300/.517 against the curveball).

Anderson is a name to watch and see if his manager would consider a trade offer (he is 93% rostered in Yahoo leagues). Monitor his changeup versus curveball usage in the weeks to come, and if the former starts ticking up, that will likely be a harbinger of good things to come.

Another name that stands out in the first quarter of the season leaderboards is Myles Straw (15% rostered in Yahoo leagues) .

You're not going to find him near the top of any power or run-producing leaderboards as he bats mostly in the eighth spot for the Houston Astros and has nary a home run this year, but his plate discipline and potential to cause havoc on the bases might soon necessitate a bump up in the lineup.

Stuck between names such as Michael Brantley, Whit Merrifield, and Jake Cronenworth on the contact percentage is Straw, who ranks ninth in contact rate this season at almost 88% of his plate appearances.

Making that number look even better is the fact that his zone contact rate is 91.5% (21st in the Majors) while his overall swing rate is 42.8%. That swing rate ranks 134th in baseball, meaning he is being incredibly selective with his swings, and when he does let it go, he almost always puts the ball in play.

Putting the ball in play is key for a player with Straw's abilities. What he does not have in power, he makes up for with speed.

Straw's Sprint Speed is an elite 28.8 feet per second (league average is just under 27 feet per second), according to Baseball Savant, which puts him in the 91st percentile among all Major League batters.

Though he has only five stolen bases so far this year, his ability to get on base should help that number rise as the season moves along. 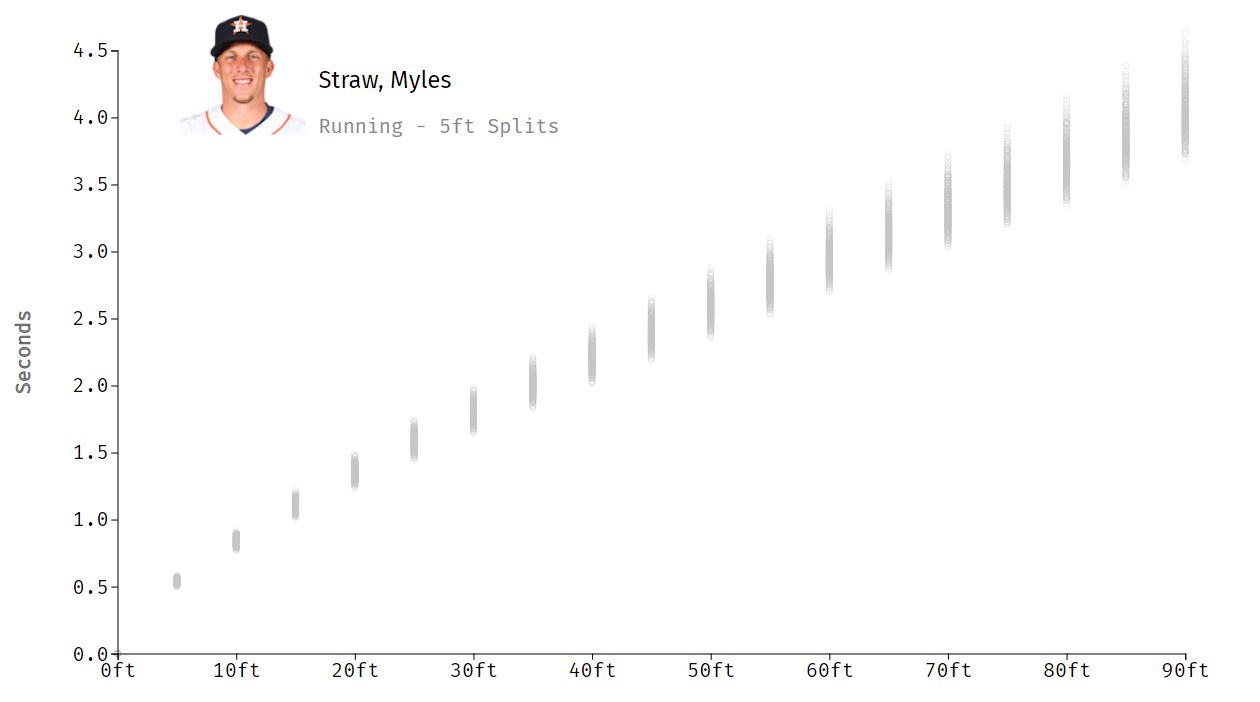 This graph from Baseball savant shows Straw's sprint speeds at five-foot intervals. And while it may not make sense without context, Straw's speed times from 75 to 90 feet are all top-18 in the league, and he is tied with players like Jazz Chisholm and Shohei Ohtani in the category.

That shows the type of speed we are dealing and helps fantasy managers understand the stolen base abilities Straw possesses when the contact ability helps get him on base.

But it's also not just contact and speed that are helping Straw: it's also his on-base ability.

Straw is one of only 62 players with a 10% walk rate this year, and considering there are 88 players with a higher strikeout rate than Straw's (20.7%), he possesses an elite combination of contact ability and keen batting eye.