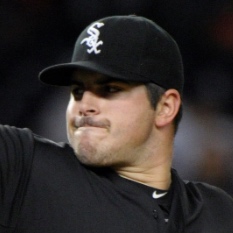 Chicago White Sox pitcher Carlos Rodon was a late-scratch from Thursday's start against the Cleveland Indians due to left shoulder stiffness.

The White Sox named Mike Pelfrey the starter instead just before first pitch. Rodon didn't make his season debut until June 28 after dealing with bursitis in his left biceps, and Chicago will likely take a conservative approach with the 24-year-old left-hander.