The COVID-19 pandemic has completely upended any sense of normalcy in the world. Going to work, scheduling family gatherings, and even buying groceries have become mentally exhausting activities thanks to needing to be vigilant about the virus.

Sports, of course, were also disrupted thanks to the pandemic, including college football. Fortunately, players and staff were largely able to stay safe, but the up-and-down nature of the 2020 season meant that some players coming out for the 2021 NFL Draft had just one game played in their final seasons.

None have been able to test at the NFL Combine in Indianapolis, so prospecting minds have relied on the arguably more subjective pro day numbers for each individual college.

All of this has meant that good, comparable data has been a challenge to find when dynasty fantasy players embark upon their rookie draft prep this year. It seems that this has led to a perception that this draft class is relatively weak in its NFL potential.

Our own Jim Sannes has examined the statistical production of quarterbacks in this class, while JJ Zachariason has done the same for running backs and wide receivers as well. I want to look at the broad strokes here, however, and analyze not just the most fantasy relevant players but the class as a whole.

Just like in the real NFL Draft, dynasties are built and crumble on the backs of mid-round and late picks. Does the 2021 NFL Draft class hold up under historical scrutiny?

The Question of COVID

One of the biggest repercussions of the COVID-19-stricken 2020 NCAA football season is that the NCAA said the 2020-21 season doesn’t count against players’ eligibility tally. Players are already entitled to play up to four years, but this year, very few teams played a full season. That means that every current player gets the 2020-21 season wiped from their ledger and can play up to five years now (including this one), not to mention the ability to take a “redshirt” year.

This boils down to the fact that NCAA players can stay in school longer despite having played some or all of this year, and that’s really good for their careers and resumé padding. That does carry some concern for dynasty rookie drafts, however, when you realize that more than 1,000 seniors from FBS schools alone are expected to return to the college ranks for a fifth “super senior” season.

FBS schools are allowed to hold up to 85 scholarships a year, and while there is currently no limit on active roster size, let’s use 100 players on our hypothetical NCAA team roster as an easy math factor. If we assume that a little less than a quarter of an average team’s roster are seniors (some probably declared early), that means an average of 20 or so players from each team would be eligible for the NFL Draft.

If an average of 10 per team in the FBS are returning for a fifth year, the population of four-year players in this 2021 NFL Draft class is half the typical amount.

There will of course be early declares from redshirt juniors, true juniors, and redshirt sophomores, so the draft class isn’t itself completely halved. However, the worry that some have expressed is that if that many veteran players are opting to stay in school, the talent of this draft class will have been dampened in a noticeable way.

I decided to test this question, not through player metrics like my colleagues, but by looking at our preconceived notions about these players: their recruiting ratings from when they were entering college.

Obviously, many players do grow and improve once they go from high school to college ball, but recruiting numbers are still a good barometer for the raw potential of a player.

I decided to use the recruiting information from the last 20 years on 247 Sports, where they grade players on a scale from 0.0000 to 1.0000 – essentially 0.00% to 100.00%. I then averaged the recruiting grades for each player that was drafted from 2010 to 2020, bundling them by position group and NFL Draft class, so that we could see the relative strength of each position each year.

For the 2021 class, I used a composite of mock drafts by FantasyPros’ most accurate mockers as the model for which players could end up being selected.

The chart below shows the quarterback, running back, tight end, and wide receivers’ average 247 grade over time. 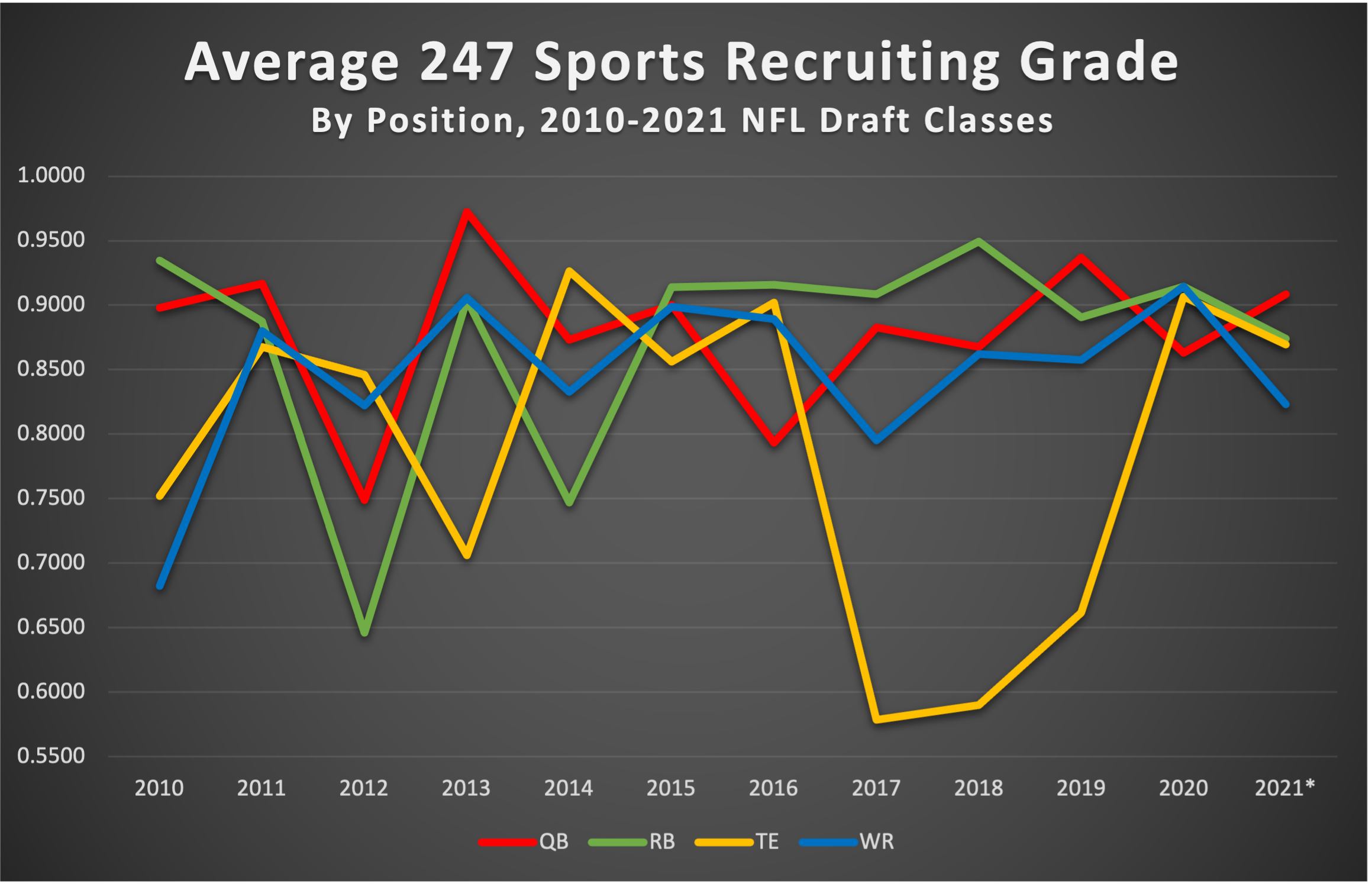 
Quarterback this year is notoriously thick, even going back to these players’ high school days. Among the five projected first-round quarterbacks, Trey Lance’s 0.8104 recruit rating is the lowest. The overall grade is buoyed, however, by Day 2’s Davis Mills (0.9918) and Kellen Mond (0.9498), while fellow high-end recruits Feleipe Franks (0.9732) and Sam Ehlinger (0.9446) are expected to be Day 3 selections. It’s no surprise that, from top to bottom, this is the highest-rated quarterback class since 2015.

The running back group appears to be exactly in line with the average class over the last 10 years, perhaps on-par with 2011’s class of runners. This included DeMarco Murray (0.9901) and Mark Ingram (0.9444) at the top, followed by solid-but-unspectacular talents after that. Compare that to Najee Harris (0.9984) and Travis Etienne (0.9171) as the clear favorites in the class, and it makes sense.

The only subpar position in this draft class are the wide receivers, the weakest the position has been since 2017 and on-par with the top-heavy (but ultimately thin) talent classes of 2012 and 2014. There are plenty of players who should end up NFL contributors, but outside of a select top tier, there aren’t many of average starters.

All in all, the group looks just fine on a potential and expectation basis. Two of the position groups are above average, one is average, and the other is slightly below in terms of historical recruiting rankings. Even if we assume that this class is top-heavy -- with the average lifted by a few high-end players but weak otherwise -- when we look at the median rating at each position (seen below), this also doesn’t bear out.

Perhaps, then, the issue might be one of age.

If players are allowed to take extra time in school, maybe there will be fewer early declares and then the average age of the draft will be higher than normal?

This also doesn’t hold water, as only the running backs are at the average age of their position group over the past decade. The 2021 tight ends and wide receivers are significantly younger than other classes, and the quarterbacks are on par but have four projected first-rounders at age 21 or younger.

In your dynasty leagues, this is a rookie class you shouldn’t avoid. The rankings of players within their positions are more challenging than ever due to pandemic-limited data, but the class as a whole seems to still have plenty of talent to choose from, especially at quarterback and tight end.

If anything, the NCAA’s “super senior” ruling may affect the 2022 NFL Draft class and the few years after that more than this one. Younger talents who were always going to enter the draft this year still did, while some of the more fringe or middling players who would’ve had to come out get another year to impress teams and improve their draft stock.

That could shift the average age of next year’s draft class up a bit. In addition, 1,000 players holding over could squeeze playing time in the 2021-22 season and skew stat distribution -- or even force some players to transfer from major programs to smaller ones to get more playing time, making our prospecting and projecting job that much harder for the next few years.

The dynasty landscape will shift as a result of the 2020-21 pandemic season, but the shockwave doesn’t seem like it will hit your rookie drafts this year. Get into the 2021 class with confidence, and don’t be afraid to move future picks in 2022 and 2023 in order to do so.