Brandon Gdula  —  @gdula13 Sep 20th, 2022
Share on Facebook Share on Twitter
How does our algorithm rank the AFC North before some key matchups in Week 3? How good are the Bills? And how high did the Jaguars jump?

Through Week 2, we're starting to see who is for real and who has cause for concern.

That being said, records won't always tell the full story in such a small sample. Take, for example, the Cleveland Browns, who are 1-1 after a last-minute loss to the New York Jets in Week 2. They were very nearly one of the remaining unbeaten teams. Instead, we have just six 2-0 teams.

On the flip side, the Browns' AFC North rival, the Pittsburgh Steelers, are also 1-1 after escaping Week 1 with a late overtime win against the Cincinnati Bengals and then narrowly losing to the New England Patriots 17-14 in Week 2.

This week, they square up on Thursday Night Football to see who can get to 2-1. The initial buzz of the NFL season is winding down, and now, the reality of wins and losses is setting in, so that matchup means a lot in terms of the division hierarchy.

Making that game even more exciting is the Prime Video Pick'Em contest offered by Amazon Prime Video and FanDuel. Be sure to answer 10 questions about this week's Thursday Night Football matchup -- for free -- for a chance to win a share of $15,000 in cash prizes. Make your picks now. 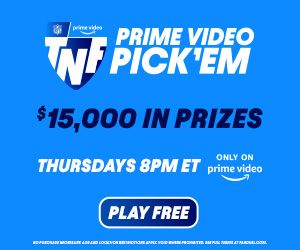 Back to the rankings. Using our nERD metric, which indicates the expected point differential against an average opponent on a neutral field, here is how our model ranks and rates all 32 teams.

The Buffalo Bills have really surged ahead in the power ratings and now have a nERD score of 12.55, a full 4.02 points higher than any other team in the NFL. Buffalo's next five games will test them, though. They travel to play the Miami Dolphins (9th in nERD) and then the Baltimore Ravens (10th). Then they host the Steelers (23rd), travel to Arrowhead to play the Kansas City Chiefs (3rd), and host the Green Bay Packers (7th) on Sunday Night Football in Week 8 after a bye. We could see them dominate the nERD standings even more if they get through that stretch unscathed.

The San Francisco 49ers jumped into the top five after a 27-7 win over the Seattle Seahawks. The big news here is that starting quarterback Trey Lance is out for the season and that the team will now move forward with Jimmy Garoppolo.

Two more NFC teams jumped firmly into the top 10: the Green Bay Packers and the Philadelphia Eagles, who have identical 3.64 nERD scores.

The big difference is that the Eagles are 2-0 and hold an 87.7% playoff probability, the third-highest mark in the NFL.

Let's take a closer look at the AFC North.

The Browns, Steelers, and Baltimore Ravens are all 1-1, and the Bengals are 0-2, so record-wise, things are tight.

The nERD ratings saw the Browns climb four spots this week while Baltimore fell from 5th to 10th and the Steelers dropped from 19th to 23rd. Our model has Pittsburgh with the lowest division odds (20.5%) of all four teams in the division. Baltimore has a tough three-game stretch, however, and a big win for the Steelers on the road would level things out.

That said, our model likes Cleveland to get the win 71.4% of the time, so a bounce-back win would have Cleveland sitting pretty entering Week 4's matchup against the Atlanta Falcons (29th). They'll need every win they can secure by then because, after that, their next seven opponents are all in the top 15 in nERD, and three of them are in the top four.