NBA Betting Guide for Monday 2/6/23: Can the Kings Get Back on Track During a Long Road Trip?

Perhaps more than anything, fantasy football is a game of adjustments. Season-long fantasy doesn't end at the draft, and smart managers learn to take the trends and data that each week of games offers and apply it to their roster decisions moving forward.

This weekly piece will look at trends from the previous slate of games and determine which trends in snaps, usage, and matchups are actionable moving forward. Let's dive in and look at some interesting pieces of information from an exciting Week 10.

As discussed on the Late Round Podcast, rookie wide receiver Christian Watson's breakout game was not as surprising as some might think considering how he is breaking the mold for wide receivers with his pedigree.

We don't normally see four-year wide receivers out of a Division II school (North Dakota State) taken in the middle of the second round. But, Watson's NFL combine metrics and athleticism were almost literally off the charts. Here are his measurements, courtesy of Player Profiler: 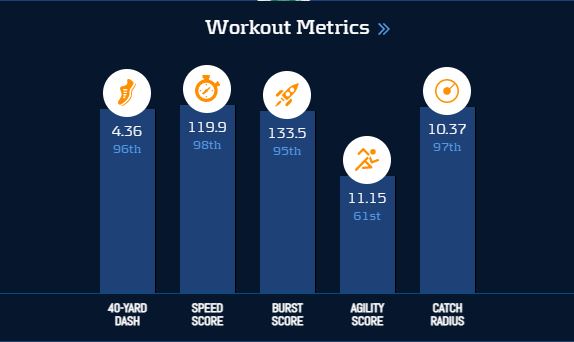 I guess you can poke holes in the agility rating, but how valuable is that really when you have a 6'4" monster receiver with speed to spare?

A litany of injuries kept Watson from receiving more than 22 snaps since Week 1, but all that changed on Sunday. With Romeo Doubs and Randall Cobb out with their own injuries, Watson was in on 54 snaps (84%) and saw a 42.0% target share, which led to his three-touchdown game. All eyes were on Allen Lazard at the beginning of the season to try and take over Davante Adams' role as the WR1 in Green Bay, but Lazard has seen above a 21.0% target share in only two games this year.

He's rostered in just 10% of Yahoo leagues, so he will be the most coveted player on waiver wires this week.

Jaylen Warren is on the Verge of a Breakthrough

There were numerous rumblings this past week that Najee Harris was going to start seeing a reduced workload, and that the Pittsburgh Steelers coaches would be giving Jaylen Warren more of a shot at a featured role. That narrative drove a lot of the discussion around whether or not fantasy managers started Harris this week, but the truth of the matter is, the move to Warren is long overdue.

At numberFire, we use a metric known as Net Expected Points (NEP), which is essentially the expected points added for every play out on the field. It measures how much a player adds to his team's expected point total over the course of a game and a season. Among running backs with at least 30 carries this year (61 total running backs), Warren ranks 2nd in NEP per rush attempt (0.14) while Harris is just 52nd (-0.11).

The players that fall below Warren would be considered some of the most dynamic rushers in the league: Tony Pollard, Nick Chubb, and Aaron Jones. Those numbers might not hold up against a full workload if Warren were to receive that kind of usage, but we certainly started to see the roles shift in Week 10.

Warren's 43% snap share was his second-highest of the season and was 13% above his season average. The Steelers are rebuilding this year with so many defensive injuries and with Kenny Pickett taking over at quarterback. So, they have an incentive to not see what they have in Warren.

In a best-case scenario for the rookie, it becomes sort of a poor man's Ezekiel Elliott-Tony Pollard situation with Warren as the more dynamic, pass-catching back.

I know you are here for some really in-depth, hard-hitting football analysis, so here is some for you: Cole Kmet has been really good at football lately.

Over the last five weeks, only Travis Kelce has scored more fantasy points overall, and only Kelce and George Kittle have scored more points per game than Kmet.

As Justin Fields has emerged as a real contender for the QB1 overall conversation, he has been the tide that lifts all the offensive boats in Chicago. Fields has been given more opportunity to throw, and as defenders are needing to stack the box more to prevent the designed runs, Kmet has benefited from lighter coverage and more space in zone coverage.

Over the last three weeks, Cole Kmet has posted a line of:

In Kmet's first 155 career targets in the NFL, he totaled two touchdowns. This is after he famously caught zero touchdowns in 2021 and analysts predicted the positive touchdown regression would come. Now it finally has given that the passing rate for the offense has increased.

Although he has been in the league for two and a half years now, Kmet is still just 23 years old. After Kyle Pitts, I can't think of another tight end I might want in dynasty leagues for the next five years -- especially considering he will be tied to Justin Fields the entire time. But it's not just dynasty where he has long-term potential value.

Consider the status of the tight end position. You have Kelce and Mark Andrews at the top. Darren Waller and George Kittle can't stay healthy. Both Zach Ertz and Dallas Goedert just suffered serious injuries. The Atlanta Falcons refuse to throw to Pitts. Everyone else is a pure crapshoot. Why can't Kmet be a top-five tight end in 2023?

Somehow, he is still available in 40% of Yahoo leagues as of Tuesday morning.