Brandon Gdula  —  @gdula13 Nov 29th, 2022
Share on Facebook Share on Twitter
Where are the Jets in the power rankings after yet another win? Do we have a new number-one team? And which squad saw their playoff odds plummet the most?

Throughout the entire NFL season as teams ebb and flow, GMC will offer stability. GMC is teaming up with FanDuel to offer you a chance for cash in the GMC Sierra Mountain Climber Pick'Em. All you have to do is answer questions about each week's games, and the more you get right, the higher up the mountain you'll move. Get your picks in before kickoff for your free chance to reach the summit and win a share of $10,000! 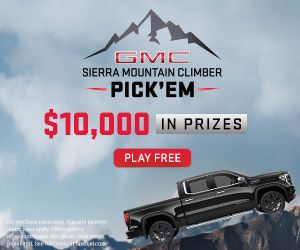 Using our nERD metric, which indicates the expected point differential against an average opponent on a neutral field, here is how our model ranks and rates all 32 teams.

The New York Jets keep raising their nERD. It's now 4.08, up 1.39 points from a week ago and 4.80 points from the start the season. The Jets' upcoming schedule will test them; four of their final six are on the road. They play the Minnesota Vikings (12th in nERD) and the Bills (2nd) on the road before a stretch of winnable games against the Detroit Lions (25th), Jacksonville Jaguars (16th), and the Seattle Seahawks (22nd). They'll close out the season in what could be a pivotal game against the Miami Dolphins (9th) in Miami.

A Thanksgiving loss for the New England Patriots was very costly for their playoff odds. Their odds fell from 46.4% to 27.1%, a dip of 19.3 points. No other team came close to that big of a downward shift this week. The Patriots are now a true outlier. They're 11th in nERD but are under 30% likely to make the playoffs. Only the Jets (44.9%) are also below 74.2% likely to make the playoffs among top-13 squads by nERD.

This one won't get much attention, but the Washington Commanders' playoff odds did jump 15.0 points to 52.6%. They have a schedule quirk upcoming during which they'll play the New York Giants (19th) on the road, have a bye, and then host them. In between those games for the Giants, they'll have to focus on the Eagles (4th). Despite a nERD score (-0.67) that puts them in the same tier as a lot of weaker teams (by record), the 7-5 start for Washington has them legitimately in the playoff mix.