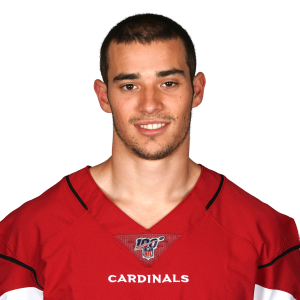 Andy Isabella to play 'mostly outside' for Cardinals

Arizona Cardinals rookie wide receiver Andy Isabella is going to play mostly outside "for the time being," per head coach Kliff Kingsbury.

Christian Kirk (ankle) and Damiere Byrd (hamstring) are expected to miss Sunday's Week 5 game against the Cincinnati Bengals, so Kingsbury is going with Isabella, KeeSean Johnson, and Trent Sherfield on the outside. Larry Fitzgerald and Pharaoh Cooper have been tabbed for slot duties. Isabella, the 62nd overall pick in this year's draft, still hasn't seen an NFL target.

The Cardinals face a Bengals defense in Week 5 that is 13th in the NFL in receiving yards allowed per game, though that's largely because they've been gashed on the ground (27th).