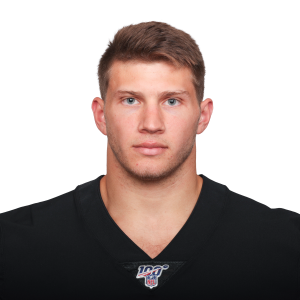 Foster Moreau (knee) ahead of schedule for Raiders

Moreau is recovering from a season-ending knee injury he suffered in early December. He was used sparingly as a rookie but proved to be a reliable option, catching 21 passes on 25 targets for 174 yards and 5 touchdowns. Moreau is expected to slot in between Darren Waller and Jason Witten on the depth chart, but the Raiders are weaker at receiver than most, so he could earn a larger role in the offense.

Moreau averaged 5.3 FanDuel points (TE36) per game as a rookie. The fourth-rounder's 84.0 catch rate was second-best out of 47 tight ends with at least 25 targets. His 7.0 yards per target ranked 25th in that same group.