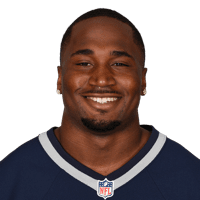 Dion Lewis considered 'best bet' to be Giants' top back

New York Giants running back Dion Lewis is "the best bet to be the Giants' top running back with Saquon Barkley out for the season," writes Jordan Raanan of ESPN.

Raanan expects Lewis to "play a substantial role" even after the Giants signed Devonta Freeman. Lewis is expected to dominate passing-game work and should also see early-down usage in Week 3 versus the San Francisco 49ers while Freeman learns the playbook. "Imagine a plus version of James White in New England with a slightly bigger workload," Raanan said. Wayne Gallman will likely be the third option in the Giants' backfield once Freeman is caught up.

numberFire's models currently expect Lewis to score 7.3 FanDuel points with 10.1 touches for 47.7 yards in Week 3. He's the RB38 in our weekly fantasy rankings and has a salary of $5,500. The 49ers enter Week 3 with a top-10 defense, per numberFire's advanced analytics, but they will be without two of their top defenders in Nick Bosa (torn ACL) and Dee Ford (back).