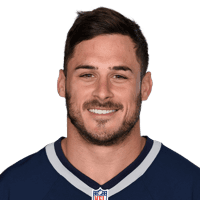 Danny Amendola (hamstring) will play for Texans in Week 5

Houston Texans wide receiver Danny Amendola will suit up Sunday in the team's Week 5 game against the New England Patriots.

That's what head coach David Culley told reporters Friday night. Amendola has missed two consecutive games with a hamstring ailment, but it seems as though the veteran has put that in the rearview mirror. Culley also said that the team will release Anthony Miller to make room.