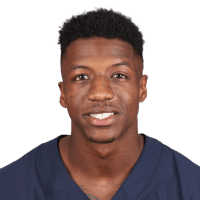 Wide Receiver Anthony Miller has signed a deal with the Pittsburgh Steelers, as the team announced he will join the practice squad.

Miller was recently released by the Houston Texans, and he's quickly found a new home. He's joining the practice squad for now, but with JuJu Smith-Schuster undergoing season-ending surgery, that opens up a clear vacancy for Miller. Keep an eye on the team's official transactions over the next few days, as Miller could feasibly find himself active for the team's Week 6 game against the Seattle Seahawks.

In 2 games this season, Miller has 5 catches on 11 targets with 23 yards and 1 touchdown.