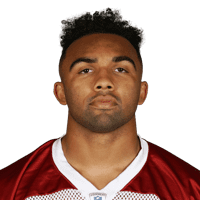 Pederson: Jags will continue scheming up play for Christian Kirk

Jacksonville Jaguars head coach Doug Pederson said that the team will continue "coming up with game plans that help Christian [Kirk] get open."

Kirk and quarterback Trevor Lawrence have demonstrated an impressive connection through the first two weeks of the season, something that Pederson noted the pair had worked on since the team's initial spring meetings. It's encouraging to hear that the team wants to continue scheming Kirk open, as that strategy has already paid dividends for the 1-1 Jags (as well as for fantasy football).

Kirk has already established himself as the Jags' go-to receiver in his first year with the team, catching 6 passes for 78 yards and 2 touchdowns in their Week 2 win over the Indianapolis Colts. He's the WR26 in numberFire's rest-of-season rankings, and is projected for 80 catches, 1,023 yards, and 5 touchdowns this season.