Still was drafted by the Cincinnati Bengals in the second round of the 2012 NFL Draft as a defensive tackle, but busted mightily in that role. He was out of the league last season, but has drawn consistent raves since the spring. Nonetheless, being locked in a competition with a 2015 sixth-rounder (Christian Covington) and 2014 undrafted free agent (Brandon Dunn) isn't inspiring for his effectiveness either.

The Texans finished third in Adjusted Defensive Net Expected Points per play in 2015. 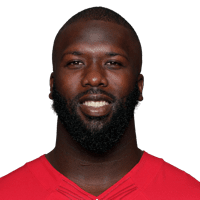