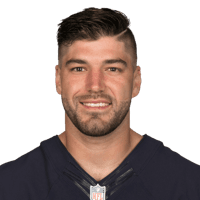 Biggs believes Daniel Brown, who worked in Miller's role while the veteran was sidelined with a foot injury during the offseason program, will push Miller for a job during camp. If Miller is healthy he will likely have an easy role, but he is no lock to be ready for the field at the start of camp and not a great bet to stay healthy after that point either. Even if he keeps his job out of camp, Miller's days in Chicago are numbered; the Bears signed Dion Sims and drafted Adam Shaheen this offseason, and the 32-year-old Miller will become a free agent after the season.

Our models project Miller as the 12th-best fantasy tight end this year, with 650 receiving yards and 5.24 touchdowns on 58 catches in 2017.