Everyone would love to have the first pick in the draft, but the truth of the matter is that only one lucky team can have it. Last night, that big winner was the Boston Celtics. With the best odds to land the first overall pick, they held position and will make the first selection of this June's draft.

As for the entire lottery, here's how things shook out.

The Los Angeles Lakers and Philadelphia 76ers are certainly happy with their position, but should they feel all that great about it, considering the historical value of a top overall pick? As we go even further down the list, which of the remaining -- 4, 5 and so on -- slots have yielded more productive players?

Since the lottery's birth in 1985, the number one pick has, on average, produced 20.83 more win shares than any other one selection over the course of his career. In a shorter amount of time, that average comes to .033 additional win shares per 48 minutes.

What about the rest of the 14 total lottery picks? Here's how the trends have taken shape. 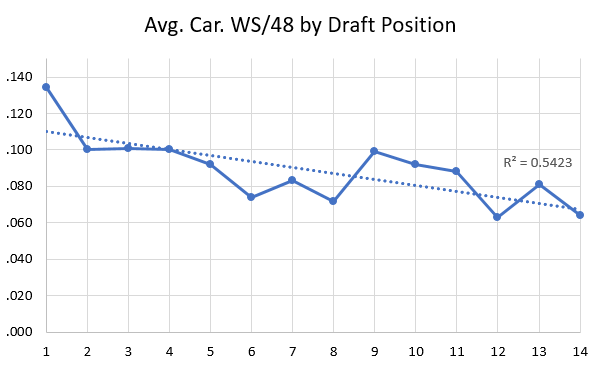 There's not too drastic of a dropoff after the first pick, right? The trend line and corresponding R-squared (coefficient of determination) figure -- 0.5423 -- tell us that the difference has been gradually negative, but that the relationship between the pick and production can only be explained by roughly 54% of the plotted data.

Using total career win shares, this next chart helps to explain the first. 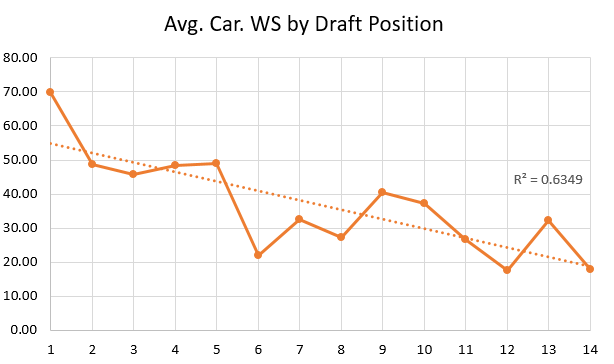 As you can see, the R-squared (0.6349) is greater, meaning that over 63% of the variability, by draft pick, can be explained by the data. In other words, there's a stronger relationship between selection and that selection's average career win shares.

Naturally, win shares are a better indicator because they take into account career longevity as well as minutes played. As a result, number one picks further separate themselves here, as picks two through five all settle around the 50-win share mark.

Outside of the top five, picks 6 to 14 are between 17.5 and 40.5 career win shares. That lucky number nine seems to be a hot spot, as players selected in this slot have produced an average of 40.47 career win shares. Dirk Nowitzki, Amar'e Stoudemire, and Tracy McGrady were all draft ninth overall, while more recent selections include Andre Drummond (2012), Gordon Hayward (2010) and DeMar DeRozan (2009).

To give you an idea of how drafting at the end of the lottery can severely change the availability of top players, only 4 of 32 (12.5%) selections have produced 50 or more win shares over the course of their careers. Below them, no other player has reached the 40-win share plateau.

In more recent history, how have top picks' per-48 production fluctuated throughout the past 16 years? 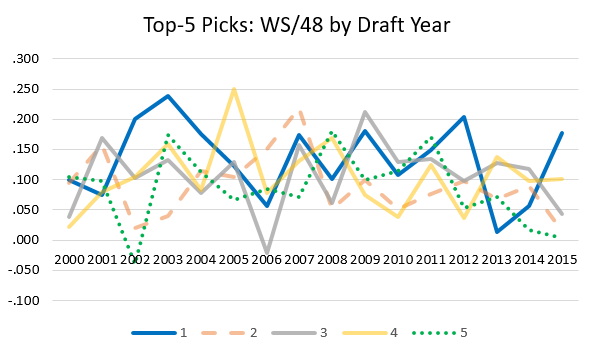 Generally, first overall picks have had higher peaks with more moderate valleys. However, there have been just a few others to reach those same levels.

In 2007, you'd see that second overall pick Kevin Durant has gone on to produce .219 win shares per 48. Likewise, from the three-spot, James Harden has yielded .212 win shares over the length of a regulation game.

To summarize, you want your team to have a top-4 pick to be safe, but you probably already knew that.

4 Storylines to Watch in the 2017 NBA Draft Lottery

Is Lonzo Ball's Play Against Tough Competition a Cause for Concern?