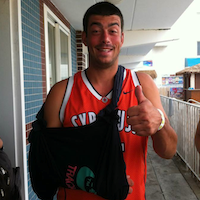 Each week, I'll be translating numberFire's NBA power rankings into words. The rankings are driven by our nERD metric, which is a predictive statistic to help define what the team's winning percentage ultimately will be.

This week, as a special treat, we'll be examining teams who are streaking. Get excited. Without further ado, let's take a look at this week's rankings.

The Knicks have the second-highest payroll in the league, their rookie head coach makes $5 million a year, their team president makes $12 million, and after a recent nine-game losing streak, the Knicks sit just half a game ahead of the tanking 76ers.

Less than one freaking game!

In the Knicks defense, at least they're losing close. Five of their last six losses were within seven points. Maybe their plan is to lose a bunch of tight games, quietly tank the season, grab a star with a top-five draft pick, scoop up a big name free agent next summer, and contend in 2016. Unfortunately, the roster is not flush with attractive players.

Their best player is Carmelo Anthony, who re-signed this summer for the "discounted" cost of five years and $122 million. He's playing well but not great - averaging 23 points and 7 boards and helping keep the league's slowest offense afloat. It's been reported that Melo didn't get along with Tyson Chandler and advocated for the former All-Star's trade to the Mavs. Naturally, Chandler is again playing at an All-Star level in Dallas. He's averaging a double-double, shooting 70% from the floor, and posting an absurd 136 offensive rating.

New York got Shane Larkin, Jose Calderon, and Samuel Dalembert back for Tyson and Raymond Felton. Larkin has shown little promise in his second season, scoring 5.3 points and dishing 2.3 assists in his 23 minutes per game. Calderon is well known for his lights-out shooting and ability to play off the ball as well as run an offense, but he's old and needs help getting his looks. He's also a terrible defender. Dalembert is average at best. It's safe to call that trade a win for Dallas.

Amar'e Stoudemire is healthy and playing well off the bench for New York. He's shooting 57%, his highest shot percentage since leaving Phoenix. He still has incredible hands, a variety of post moves, and a good stroke from the free throw line, but he's a turnstile on defense. It'll be interesting to see if the franchise is willing to part with his mammoth $23.4 million expiring contract before the trade deadline. He could be useful to a contender looking to upgrade offensively in the post, and the Knicks could always use another draft pick.

Last summer, the Atlanta Hawks hired Spurs assistant coach Mike Budenholzer away from Gregg Poppovich. Since that time, the Hawks have been a dream for stat geeks like myself. In Budenholzer's first season with the team the Hawks ranked first in the league in made three pointers and passes per game. This season they're continuing their quick ball movement ways.

Atlanta currently ranks in the top seven in many key areas:

But it's not just the stylistic change that's guided the Hawks to seven straight wins and a share of the Atlantic Division lead. They have a unique starting unit with five versatile players who can move the ball and hit open shots.

The Hawks' starting unit has outscored its opponents by five points per 100 possessions so far this season. Not the greatest margin but certainly not bad.

The bench is no slouch. They added Thabo Sefolosha this offseason, a playoff proven defensive stopper who can be called upon to guard up to four positions. They also feature German-born backup point guard Dennis Shroder. He's shining in his second season, shooting 53% percent from the floor and boasting a noteworthy 2.9 nERD while running the backup unit and playing 17 minutes a game.

Atlanta has been long overlooked in the Eastern Conference despite making the playoffs each of the last seven seasons. But if they continue this inspired play, they might move into the East's inner circle along with Toronto, Cleveland, Chicago, and Washington.

By now you're all well aware of the Warriors' hot start. They are 18-2, have the best record in the league, thirteen straight wins, et cetera et cetera. We've already diagrammed the longest win streak in franchise history. Now let's take a look at the front-runner for Most Improved Player: Marreese Speights.

Speights is on a tear. He's got career highs in field goal percentage (54%) and defensive rebounding (7.3 per 36 minutes.) He's the league leader in points per minute! Check out his numbers during the win streak.

Speights is providing offensive stability for a bench unit that struggles to score. Heck, he is the offense. Just look at the guys he's on the floor with.

Andre Iguodala is playing tentative offensively and tends to over pass. Leandro Barbosa is shooting 12% from beyond the arc. Shaun Livingston is taking one shot every four minutes. Brandon Rush might not get to 20 on a Super Shot right now. Festus Ezeli is a glorified foul sponge, and David Lee is still out.

Steve Kerr has trusted Speights in spots where former coach Mark Jackson didn't. He's running Mo with the starters on nights when he's "feelin' it." Two weeks ago in Charlotte, nobody on the team could shoot. Speights came to the rescue with 27 points on 60% shooting and scored the first 16 points of the fourth quarter to bring the Warriors back from down 10.

Kerr has also experimented recently with Speights playing backup center. He's been beaten on post ups by bigger big men from time to time, but for the most part Speights has held his own defensively. He's currently posting a career high 97 defensive rating.

Questions will arise when David Lee makes his return, but for now, this team is humming behind a dominant top line, great team defense, and a tremendous boost off the bench from Marreese Speights.