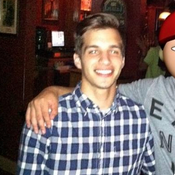 With the NBA season slowly approaching, naturally we want to predict which teams we think will be successful. Success in the Western Conference, however, is not as volatile as it is in the East.

There is a clear set of teams that have distanced themselves from the pack, and the rest seem to be fighting for the last few playoff spots.

This an analytical look as to which teams will make the Western Conference Playoffs, and the order in which we project they will finish the season in the standings.

You'll notice that along with each team is their key additions and losses -- but know that the word "key" was used somewhat loosely -- and their nERD score, which is predictive of the team's ultimate winning percentage).

There is not much to say about the Warriors being the top contender in the West. They are the defending champs for a reason after all. Last year, they obliterated seemingly everyone during the regular season, while posting the highest win total since the 2006-07 Dallas Mavericks. During what was his MVP campaign, Stephen Curry displayed the second highest Effective Field Goal Percentage in the league despite also posting the highest Usage Rate of his career.

They retained all their key players, and while they lost David Lee, he was not very conducive to their success anyway. With Lee on the court, the Warriors' Net Rating, which measures their point differential per 100 possessions, was just 3.2. It was 13.9 with him off the court. Our algorithms project them to finish 56-26 as the NBA's best team.

Itâ€™s pretty amazing that the Spurs were able to establish a culture in which players repeatedly take less money than they are worth. Because of that, they were able to sign David West while retaining Danny Green and also adding LaMarcus Aldridge. Though Tiago Splitter had been a steady contributor to the Spurs, last year he posted career lows in both Free Throw Rate and Total Rebound Percentage, making his departure slightly easier to handle.

Belinelliâ€™s presence as a floor spacer could be missed, but this has enough firepower to compensate. We project them for an Offensive Rating of 108.5, seventh in the NBA. Aldridge and West are two gifted frontcourt players, who are being added to a team that already would have been a championship contender.

Just behind the Spurs are the Los Angeles Clippers. The Clippers were basically a five-man team last year, and were just one win away from the Western Conference Finals. We know how absurdly good Chris Paul and Blake Griffin are, and retaining DeAndre Jordan was essential for their title hopes, but their future hinges on their role players.

Jamal Crawford shot just under 40% last year and an even worse 36% in the playoffs. Crawfordâ€™s importance was magnified as the only player on the Clippers bench who could create shots, but they are hoping new acquisitions Paul Pierce and Lance Stephenson can help shoulder that load. Josh Smith and Cole Aldrich were also added in an attempt to provide frontcourt depth, and in this area they largely improved. Smith was actually a good defender last year holding opponents to a field goal percentage 4.2% lower than their average, and defensive frontcourt depth is something the Clippers have not had at all in the Chris Paul era. Doc Rivers said that the team might be blown up if they canâ€™t take the next step this year, so this could be their last chance.

Personal issues aside, the addition of Ty Lawson to the Rockets is terrific. Fourth in the league in assist percentage last year, Lawson set up 43% of his teamâ€™s field goals while on the court, making him a great add to a team with tons of shooting and Dwight Howard. It will be interesting to see how the career 37% three point shooter handles the increase in volume of deep attempts that comes with joining the Rockets. For scope, last year he shot threes on about 22% of his attempts, whereas Patrick Beverley, who shoots 36% from deep shot 60% of his shots from beyond the arc. Thatâ€™s a dramatic change in volume and it could positively affect Lawsonâ€™s middling efficiency. This team was one solid contribution away from taking the next step last season and with the addition of Lawson, along with hopefully staying healthy, James Harden might be able to usher them to the finals. The margin between the Rockets and Spurs is razor thin, based on our initial projections.

On of the biggest keys to the Thunder's success will be the play of Enes Kanter. Kevin Durant and Russell Westbrook are both top talents in the league, Serge Ibaka is the kind of player that every team wishes it had, and Kyle Singler, Anthony Morrow and rookie Cameron Payne are all solid NBA players. The problem is that Kanter, who is now eating a lot of cap space, might not be good enough to be a major piece on a title team.

Heâ€™s an atrocious defender, who on his career posts a 27.5% Free Throw Rate on the offensive end. For comparison Nerlens Noel, who still boasts a very raw offensive game, posted a 35% Free Throw Rate during his rookie season. Free throws are the most efficient means of points on a basketball court, and if you arenâ€™t good on the defensive end, you have to be efficient on the offensive end. Getting to the line plays a large part in that. But prospects are still bright for this Thunder team, and people have quickly forgotten how dominant they can be with a healthy lineup.

Here is where things drop off, based on nERD. This Mavericks team has a good amount of turnover this past summer, and they could be a lot better than many people think. Last year, Chandler Parsons Chandler Parsons posted three-year lows in Win Shares, likely due in some part to his declining Assist Percentage. With improved shooting around him in Deron Williams and Wesley Matthews, he should have more space to operate, and should take a step towards being the playmaker Dallas needs.

If Matthews can hit his stride after recovering from a major injury, he will prove to be a fantastic signing for Carlisle and crew. He's an above average wing defender who boasts efficient offensive statistics with a sub-20% Usage Rate. He doesn't need the ball in his hands to be affective, as spacing his shooting provides will open up space for everyone else on the court. Williams has to prove he has some left in the tank for this team, after posting a -1.7 nERD score last year, which indicates how many wins above or below .500 a player would make an average team as a starter. His poor efficiency is a product of his poor shooting year, where he had the lowest Effective Field Goal Percentage of his career. Luckily for him, Carlisle is one of the NBA's best coaches and should be able to bring the best out of him -- whatever that may be at this point in his career.

Is there any more perfect fit for the grit and grind Grizzlies than Matt Barnes? Well, yes. Barnesâ€™ persona fits in well, but with the Clippers, he had been pretty average. The Grizzlies needed spacing, and although 60% of his attempts came from three point range last year, Barnes shoots just 34% from deep in his career. Brandan Wright is their awesome bench addition, who posts a career PER over 20. Wright also provides some nice defensive front court depth, with a block rate of 5.1 last year, tied with Roy Hibbert and just better than Andre Drummond in that respect. Koufos was a valuable asset last year and his loss hurts, but the overall team outlook doesn't change much for them. They will go as far as the Marc Gasol- Zach Randolph-Mike Conley trifecta can take them. The Grizzlies project as the 7 seed in the West but start the year eighth in our power ranks, which speaks to how difficult and top-heavy the Western Conference will be.

There's a massive drop in overall efficiency from the Grizzlies to the Pelicans, who start the year 13th in our power rankings.

Anthony Davis is truly a transcendent talent, and last year was his national coming out party. Davis dominated on both ends of the court, leading the league in both two-pointers made and blocks, despite missing 14 games. The Kendrick Perkins signing was a little confusing, given Davisâ€™ production when sharing the front court with a shooter as illustrated below. Check out how Davis played with Ryan Anderson on the court last year. 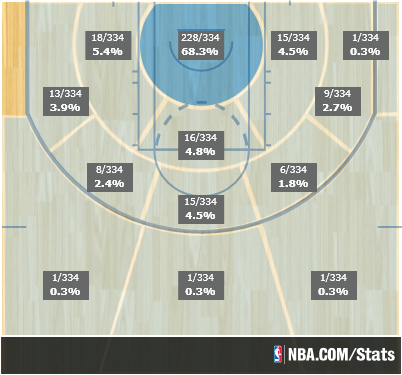 Here's Davis without Anderson on the floor. 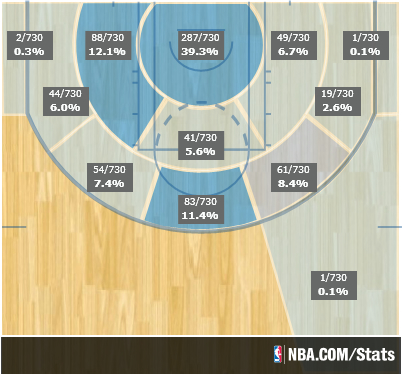 Davis without Anderson is ugly by comparison. Davis put up 30% more attempts near the basket when given the necessary court spacing, and Iâ€™d be surprised if Alvin Gentry didnâ€™t apply the value of spacing given his coaching acumen and a year spent with the Warriors.

Last year, the Pelicans played with the fourth slowest pace in the league, and the thought of Davis playing in an up-tempo system under Gentry with the necessary spacing is downright terrifying.

Utah is just outside of the playoffs in our projections, but Rudy Gobert could change their outlook rather quickly if he continues his strong play from last season. He allowed opposing players to shoot just 40.8% at the rim last season, making him the best rim protector in the league. The Jazz will also be getting Alec Burks back, who they paid handsomely before the start of last season. Burks struggled for them in his 27 games last year, shooting just 40% from the field, but I expect some positive regression in there as he enters his fifth year in the league. They have the pieces to be in the playoffs. Gordon Hayward is awesome (he posted a 6.3 nERD last year, 25th in the league) and Derrick Favors (7.8 nERD) just keeps getting better. A little growth from Burks, Trey Burke, and Rodney Hood will put them in contention for a playoff seat this year.

A lot of people hold the Suns' end of season form against them, but as a team that was playing for nothing you can see why they may have taken their foot off of the gas a little bit. The addition of Tyson Chandler was a big free agent surprise, and an impressive move for a smaller market team like Phoenix. Chandler was eighth in the league last year in nERD (10.6), making him an extremely valuable player even though his scoring output is low. Suns fans can look forward to seeing T.J. Warren contribute more this year, and a full season of Brandon Knight at helm. The only issue here is that the West is just too tough.

What Does Brandan Wright Bring to the Phoenix Suns?

Where Should You Draft Rudy Gobert in Fantasy Hoops This Year?