Besides a halftime deficit for Ohio State and an assault in the tunnel at the Big House, last week was run-of-the-mill. The Buckeyes prevailed in a dominant second half, and eight Michigan State players were suspended for their actions after Michigan’s 29-7 victory. Michigan and Ohio State are both massive road favorites against Rutgers and Northwestern, respectively, this week. The major drama in the playoff race will unfold in the SEC this week.

Tennessee sits atop the College Football Playoff rankings, and Georgia owns the top spot in the AP Poll. The Volunteers will travel to Athens on Saturday for a game that will surely decide the number-one spot in both rankings. That game has overshadowed the matchup between Alabama and the tenth-ranked LSU Tigers in Death Valley. The spread and total for the Tennessee-Georgia game are in line with our model’s predictions, so we’re not going in-depth on it. 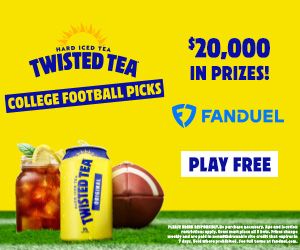 After Florida State spoiled Brian Kelly’s first game as the LSU head coach, the Tigers have won six out of their last seven with their only loss coming against Tennessee.

LSU is a balanced team; the offense is led by transfer quarterback Jayden Daniels, who is 14th in ESPN's QBR this year. The defense is anchored by NFL prospect B.J. Ojulari, who leads the team with four sacks.

Alabama has had an inconsistent season. First, they looked vulnerable against Texas early in the season, and then they lost to Tennessee in a thrilling game that came down to a field goal. They have the reigning Heisman winner in quarterback Bryce Young, but they haven’t had consistency in the running game or at the wide receiver position.

The Tide’s offensive line ranks outside of the top 50 in both average line yards and opportunity rate, according to Football Outsiders. Running back Jahmyr Gibbs leads the team in both rushing attempts and receptions since there hasn’t been a receiver that has emerged as a go-to option for Young.

LSU has a defense good enough to exploit Alabama’s weaknesses. Ojulari leads a strong pass rush, and if Alabama’s receivers can’t create separation, Young will be under pressure for much of this game. Overall, the Tide are more talented, but they’re not as disciplined as the Alabama teams in recent years. They’ve shown that they can be outscored even when Young is at his best -- like in the game against Tennessee.

LSU will still most likely lose, but Alabama’s vulnerabilities are baked into our model’s projection. The Tigers have a 68.9% probability of covering, but an upset win would be a great early return in the first year of the Brian Kelly era.

The Irish had a rough start to their season that put them outside the group of playoff contenders with losses to Ohio State, Marshall, and Stanford. Clemson is in the playoff hunt, but they need to win this game to stay at the top of the mix given their ACC schedule.

Both teams are better on defense, but the total is low enough that the over is a solid bet per our model. We project the score going over the total with 76.1% probability.

Clemson and Notre Dame each employ offensive lines that excel in run-blocking; both rank within the top 25 in average line yards and within the top 15 in stuff rate. That’s good news for Clemson’s Will Shipley and Notre Dame’s Audric Estime, each of whom is averaging at least 5.5 yards per carry. Both defenses haven’t played particularly well against the run, either, ranking outside of the top 60 in average line yards and outside the top 90 in opportunity rate.

Don’t forget about Michael Mayer, either; the Irish’s tight end is the best in the country and likely a first-round selection in the upcoming NFL Draft. Neither team’s quarterback has lit the nation on fire this season, but the players around them on offense should be enough.

Ultimately, this game projects to be a rushing battle, so while fans shouldn’t expect a back-and-forth thriller, it won’t be a low-scoring affair either.

The Wolverines missed covering by a point against the Spartans last week, but the game could’ve easily gotten out of hand -- tunnel scuffle aside -- if Michigan would’ve been more efficient in the red zone. All-American kicker Jake Moody connected for five field goals; four of which were within the 40-yard line.

Rutgers has a decent rushing defense -- surprisingly. The Knights are ninth in average line yards and eighth in opportunity rate. Michigan’s offensive line will be the best the Knights have seen since Ohio State, who beat them 49-10. That defensive line hasn’t been able to generate much pressure, though, which will allow Michigan to move the ball through the air efficiently.

J.J. McCarthy is 16th in QBR this season, and while running the ball has been the bread and butter for the Wolverines, McCarthy can make explosive plays. Michigan has destroyed good rushing defenses before (hello, Penn State), but if Rutgers makes life difficult for Blake Corum and Donovan Edwards, the Wolverines can turn to McCarthy to gain the chunk yardage.

Our model has Michigan covering with a 62.2% likelihood, so a bet on the Wolverines is still good value.