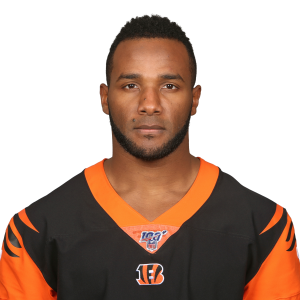 ESPN's Jenna Laine believes that Tampa Bay Buccaneers running back Giovani Bernard could be cut prior to Week 1 of the 2022 NFL season.

Bernard was a sleeper running back heading into the 2021 fantasy season due to his ability to catch passes out of the backfield; quarterback Tom Brady has famously peppered his backs with valuable targets. However, Bernard eventually ceded most of the third-down work to teammate Leonard Fournette and was eventually limited to just two-minute drill work. Laine points to the team drafting Rachaad White in the 2022 NFL Draft and to Ke'Shawn Vaughn's improvements as to why the Bucs could afford to move on from the veteran back.

Our season-long projections currently have Bernard slated as the RB3 on his own team (with regards to fantasy). Fournette is numberFire's RB12 heading into the season and should see another massive workload, while rookie White mixes into our rankings at RB46. There's plenty of fantasy value in the Bucs' backfield, but it seems unlikely that Bernard will benefit much from it this season.