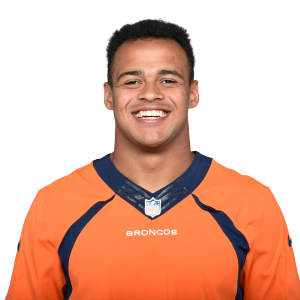 Seahawks' Noah Fant 'excited to get to work'

Seattle Seahawks tight end Noah Fant said he is "excited to get to work" on breaking through his "high-600 yards ceiling".

"Goals for Year 4 is to take that leap, right?" Fant said, talking about how his production as a receiver since joining the league has hovered around 500-600 yards per season. The former first-round draft pick of the Denver Broncos joined the Seahawks in March as part of the trade that sent Russell Wilson to the Broncos, but Fant seemed optimistic that he will have "every opportunity" to break out in Seattle.

Unfortunately for Fant, he seems destined to catch passes from either Drew Lock (with whom he has played before) or from Geno Smith, in a Seahawks offense that does not project kindly. He will also compete with Tyler Lockett and DK Metcalf for targets in what could be a run-first offense under Pete Carroll. He's numberFire's TE21 for fantasy this season and is projected to catch 61 balls for 562 yards and 3 scores.