Austan Kas  —  @AustanKas Jun 24th, 2021
Share on Facebook Share on Twitter
Germany offer some value in the betting market ahead of their Round-of-16 clash against England. Which other bets should you make prior to the knockout rounds?

We're down to 16 teams in the 2020 European Championships, and it should be a fun ride from here. 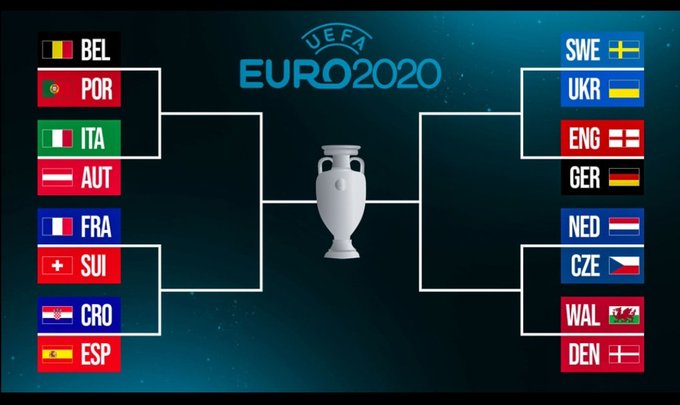 FanDuel Sportsbook is offering a slew of different types of bets for the knockout rounds. Let's take a look at some bets that stand out prior to the beginning of knockout play on Saturday.

Germany to Reach the Semifinals (+170)

The winner of the England-Germany match is going to have a very soft quarterfinal matchup versus either Sweden or Ukraine, so this is basically a bet on Germany to advance past England.

Playing at Wembley, England is a slight favorite to beat the Germans, but Gareth Southgate's Three Lions side has been underwhelming in attack so far. Across three group stage matches, England netted just two goals, and they didn't play anyone of Germany's caliber. Only Finland and Hungary totaled fewer shot attempts than England in group play, and England totaled 0.0 expected goals (xG) in the second half of their last match, a 1-0 win over the Czech Republic. England has yet to record as much as 1.0 xG in a match in this tourney, per FBRef, posting 0.9 against Croatia, 0.9 versus Scotland and 0.8 versus the Czechs. Yikes.

Of course, it's not like Germany is flying high, either, as they barely advanced out of their group -- although the Germans' group included tough matchups with Portugal and France. The Germans have shown a lot more attacking punch than England has, tallying 2.2 xG versus Hungary, 2.1 against Portugal and 0.8 versus France (conceding just 0.4 to the French). While the 2-2 draw with Hungary was a disappointing result for Germany, Joachim Löw's men held a 2.2-0.6 xG advantage, so they were a bit unlucky.

Admittedly, on paper I like England's side better than I do Germany's, but for whatever reason -- a lack of pressing and quick passing in addition to an out-of-form Harry Kane, if you want my two cents -- England's wealth of attacking talent just hasn't translated to chances in this tourney. I think Germany will advance past England, and the Germans would then be signifcant favorites to move past Sweden or Ukraine and cash this bet.

Plus, you can get Germany at +600 to be eliminated in the semis, so if you think they get there and lose to a Dutch side that has a nice path to the semifinal, there's some coin to be made.

After group play, Cristiano Ronaldo paces all players with five goals. No one else has more than three. As such, Ronaldo is -140 to be the tourney's top scorer. But Ronaldo and Portugal have a very tough clash with Belgium in the Round of 16, and if they go out against Belgium, it'll ding Ronaldo's chances of winning the Golden Boot while simultaneously increasing Romelu Lukaku's odds.

Lukaku, Belgium's star striker, is one of a few players with three goals to his name, and among everyone with three or more goals, his side has the best odds of reaching the semifinals (+190) as well as the best odds to win it all (+900). While Belgium has a rough path to the final, possibly getting an in-form Italy and then France if they can get past Portugal, Roberto Martinez's side looks to be up to the challenge with Kevin De Bruyne healthy and Lukaku firing.

The scary thing here is that Belgium are only slight -132 favorites to advance past Portugal, so this bet could be dead in the water right away if Belgium fall to Ronaldo's squad. But if Belgium can edge Portugal, I like Lukaku's chances of chasing down Ronaldo in the race for the Golden Boot.

So far in this tourney, Spain has put together pretty good performances and gotten just one good result, which was a 5-0 thrashing of Slovakia last time out. Their xG numbers put them right there with Italy and the Netherlands, two teams that have gotten loads of press for how good they've looked. The headlines about Spain, meanwhile, have mostly been about how Luis Enrique's side can't find a good number-nine. While that's a fair claim, Spain's finishing woes have masked how well they're creating chances.

Spain amassed 7.3 xG in the group stage, the second-most (Netherlands, 7.6), and their total of 9.6 non-penalty expected goals plus expected assists is third behind Italy (10.0) and Netherlands (12.6).

There's been some misfortune at play for Spain, but it hasn't been all bad luck. Alvaro Morata has scored one goal on 2.8 xG while Gerard Moreno has no goals on 1.7 xG. This is a real problem for Spain, and it was something you could see coming as the Spanish consistently created tons of chances in Euro qualifiers and struggled to put them away.

But despite the lack of an elite finisher to lead the line, Spain has been really good everywhere else. They're obviously creating plenty of opportunities in attack, and they conceded just 1.8 xG in the group stage, with 1.1 of that coming in their opening match. Spain also got back midfield lynchpin Sergio Busquets for their last game, and all they did was put five on the board while holding Slovakia to 0.1 xG in what may have been the most dominant performance we've seen from any side in this summer's Euros.

The huge hurdle for Spain to get to the semis -- aside from their issues finishing chances -- will be a likely quarterfinal date with France. Spain is -450 to advance past Croatia in the Round of 16, and assuming France topples Switzerland in their first knockout match, it'll set up a big Spain-France meeting in the quarters.

France is great, but I just haven't been that impressed with them in this tourney as the only match in which they bested their opposition in xG was against Hungary. The French came out on the short end of the xG stick versus Germany (0.8-0.4) and Portugal (1.9-1.6). France's 3.3 xG is just the 13th-most through the group stage.

I know xG isn't everything and I know Spain's finishing is a huge bugaboo, but I think La Roja would have a very legit chance to knock out the defending World Cup champs and make good on this bet if the two sides meet up.