Have the San Francisco Giants Lost Their Even-Year Mojo?

I'm not sure anyone has ever taken the whole "it's an even-numbered year so the San Francisco Giants have to win another World Series" thing seriously, but maybe, deep in the backs of our minds, we have.

Funny thing is, no one was laughing at the All Star Break when the Giants entered with a 57-33 record, the best mark in baseball. However, everything has changed in the second half. After Tuesday night's devastating, come-from-ahead, 6-4 loss to the San Diego Padres, it's hard to see that even-year magic right now.

Below is Fangraphs' Win Expectancy Graph. No team wants to see a steep drop like that so late in the game. 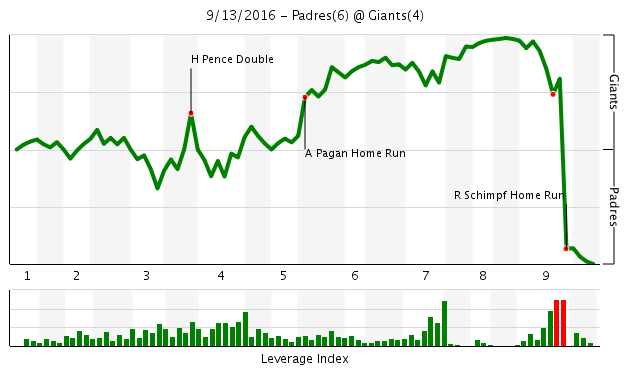 The Giants entered the 9th inning with a seemingly comfortable 4-1 lead. They had a 97.5% chance of winning that game, but one Ryan Schimpf swing flipped the script.

It doesn't get any more clutch than this...@Ryan_Schimpf completes the comeback with this 3-run BOMB ðŸ’ªðŸ¤ðŸ¤ðŸ¤ pic.twitter.com/BxOtVZpVuw
â€” San Diego Padres (@Padres) September 14, 2016

The Padres were down to their final strike before Schimpf hit the ball out to the farthest part of the ballpark. My goodness!

Even with the loss, the Giants are still in the thick of the National League wild card picture, holding the top spot with a 77-67 record, half a game better than the New York Mets, who hold the second wild card, and just one full game better than the St. Louis Cardinals. The Miami Marlins are five back and the Pittsburgh Pirates are six out, although both are probably out of the race.

Since the All-Star break, San Francisco has gone 20-34. If they miss the postseason, they will become the first team in the wild card era to enter the All-Star break with the best record in baseball and not make the postseason. The last time it happened was in 1993, when, coincidentally, it was also the Giants, who won 103 games only to finish second in the NL West to the incredible Atlanta Braves, who won 104 that season.

In '93, the Giants continued to play outstanding baseball in the second half, going 44-29. They were just run down by an insanely hot Braves squad. This year, everything has fallen apart. Here are their second half numbers and NL rank in each category.

Across the board, the Giants have struggled since mid-July. Their offense has scored the third-fewest runs and hit the third-fewest homers, the starting staff's ERA and FIP have both been near the bottom of the NL, and even though their bullpen has the second-best ERA in the second half, their 10 blown saves are the third-most in the league.

The Giants are suffering from a severe power drain in the second half. It's not great that Angel Pagan leads the team in dingers (7) with Denard Span coming in second (6). The middle of the order -- namely Hunter Pence (4 jacks), Buster Posey (1) and Brandon Belt (5) -- have simply not given San Francisco enough punch in the middle of the lineup since the break.

Posey's power outage is especially interesting. His slash lines between the two halves of the season are good and consistent, but he hit 11 bombs in the first half and just one in the second half. Pence's second half slash line (.293/.354/.442) is also good, but again, not much power.

Baseball is on pace to approach the record for most homers in a season this year. But the Giants have not taken part in the grand barrage, and it's hurting their offensive production in the second half.

The starters in the second half have been good, if not spectacular, and that includes Madison Bumgarner, who has a respectable ERA of 3.86 and FIP of 3.75, still striking out 10.29 batters per nine innings. But that ERA has jumped almost two full runs higher than his first-half mark of 1.94. His 2.92 first-half FIP is also up almost a full run in the second half.

It is still a solid group, but they haven't been able to bail out an offense that has forgotten how to score runs.

However, the main problem of late has been the bullpen.

With rosters expanded in September, manager Bruce Bochy is trying virtually everyone in the organization who can throw a baseball overhand. The Giants have used 16 different bullpen arms in the second half thanks to all the callups, and yet, the Giants are still having major issues closing games.

Last night, it was Hunter Strickland's and Steven Overt's turn to blow a save, the Giants' sixth blown save in their last 10 chances. That's after Santiago Casilla's four blown saves, and one each from Joe Nathan and Will Smith. Sergio Romo hasn't blown a save, and perhaps he's the next man up.

But the Giants now have 10 losses this season after they have led by three or more runs. That's three more losses than they had over their previous two seasons combined (seven). And when you consider how important a good bullpen has been to San Francisco's three previous World Series titles, their current situation lies in stark contrast to those other even-year title teams.

Even with all these negative factors, the Giants are still in a great position to make the playoffs. They are just four games back in the NL West and still have an outside shot at the division, although our projections give the Los Angeles Dodgers a 92.5% chance of winning the NL West.

But our projections also show the Giants with a 69.0% chance of making the playoffs. And when you factor in that this is, in fact, an even year, perhaps those numbers divisible by two will add a few extra percentage points not calculable by human metrics.