How Improbable Was the Cubs' Comeback Against the Giants?

Apparently, magic has a shelf life.

The Chicago Cubs, the team that won 103 games during the regular season this year and the prohibitive favorite to win it all in 2016, took down the cockroaches of Major League Baseball with a final inning that will be remembered for the ages.

The ninth inning, San Francisco's bugaboo coming into the playoffs because of the bullpen, cost them a chance to force a decisive Game 5 Thursday night when they allowed the Cubs to score 4 runs, blowing a 5-2 lead, to lose 6-5.

The Cubs move onto the National League Championship Series against the winner of the Washington Nationals-Los Angeles Dodgers series, which will be decided in a Game 5 of its own on Thursday.

It was a comeback for the ages for the Cubs -- and a predictable collapse for the Giants.

According to FanGraphs, the Giants were near locks to come away with the win during the late innings. 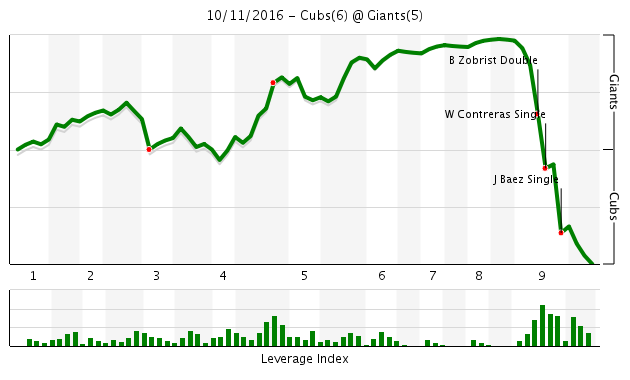 If you were standing at the top of that graph and accidentally slipped off the edge, you would die.

Giants starter Matt Moore, acquired in a midseason trade with the Tampa Bay Rays, pitched a strong game in Game 4, going 8 innings and striking out 10 while giving up just 2 runs on 2 hits with 2 walks. Only one of those runs was earned.

But Moore couldn't go the whole nine. So, manager Bruce Bochy decided to go to his bullpen, which was the right thing to do.

In the previous three world championships, Bochy's bullpen -- and his expertise in using it -- was one of the main factors in the team winning those titles. But 2016 was another matter. The Giants led baseball in blown saves and in September set a record with five losses when entering the ninth inning with the lead.

Still, a 5-2 lead is almost insurmountable under the circumstances. According to FanGraphs' win probability chart, the Giants' chances of winning stood at 97.5%. The Cubs' odds of pulling it out were 2.5%.

Bochy decided to start the inning with the right-handed Derek Law versus the likely MVP of the National League, Kris Bryant. Law had a 2.13 ERA in 61 appearances this year, but Bryant singled. The Giants still had a 94.2% chance of winning the game.

Bochy then pulled Law and brought in left-handed specialist Javier Lopez to face the left-handed Anthony Rizzo. On the season, lefties had hit just .208/.315/.312 against him, but Lopez walked Rizzo, putting runners at first and second with no outs. The tying run was coming to the plate, and the Giants' chances of winning fell to 86.9%.

So Bochy came out to the mound again and brought in Sergio Romo, who, the night before, had blown a save in the ninth when he allowed Bryant to tie the game with a two-run homer. Ben Zobrist came to the plate and lined a double to right that scored Bryant, pulling the Cubs to within two runs.

Now Chicago had runners on second and third with nobody out. Left-hander Will Smith was summoned to try and get Willson Contreras out.

It did not go well.

He didn't exactly scald the ball, but that base hit tied the game at 5, giving the Cubs a 58.2% chance of winning the game. Those odds would get even better when, after a Jason Heyward fielder's choice, this year's postseason hero for Chicago, Javier Baez, did it again.

The Cubs were now at 86.4% to win, and after Aroldis Chapman locked down the save with a 1-2-3 ninth inning, the Giants' even-year magic was erased by the Team of Destiny.

Only one other time in baseball history had a team overcome a three-run deficit entering the ninth inning to clinch a postseason series. That was the 1986 New York Mets in Game 6 of the NLCS against the Houston Astros.

The Mets, you'll recall, went on to win the World Series against the Boston Red Sox, overcoming a 3-1 series deficit in the Fall Classic.

Are the Cubs headed down that same road? All signs point in the affirmative, after crushing the magical voodoo of the San Francisco Giants in Game 4.