World Series Game 7 Recap: The Cubs Win It All

It happened. And it's probably going to happen a few more times before all is said and done.

In one of the most remarkable baseball games ever played, the Chicago Cubs began their presumed dynasty and outlasted the Cleveland Indians in Game 7 of the 2016 World Series 8-7 in 10 innings.

In doing so, the Cubs ended a championship drought that lasted 108 years.

There's no need to make the game appear sexier than it was. It was, quite simply, among the greatest sporting events in American history. The Cubs, the new "America's Team," won their first World Series since 1908, defeating a never-say-die Indians outfit that was trying to win their first since 1948. And the game itself had more twists and turns than a West Virginia country road through the woods. 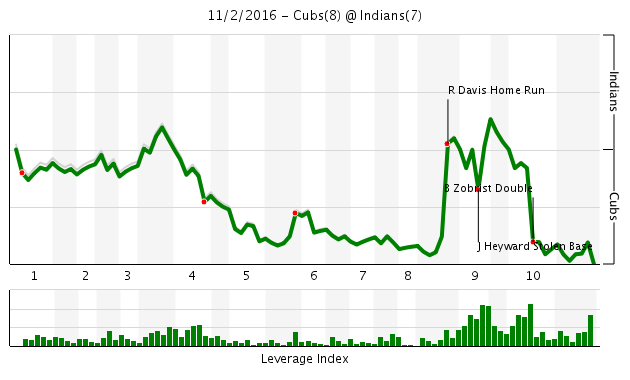 Cubs outfielder Ben Zobrist was named World Series MVP after going 10-for-28 (.357) with 5 runs, a triple, and 2 doubles, the final two-bagger the one that helped clinch Chicago's title in extra innings last night.

But the heroes on both teams were plentiful.

Throughout the World Series, if you blinked, you probably missed the starting pitchers. In this Fall Classic, no starter went longer than six innings in any start, the first time that's ever happened.

The Indians turned to their ace, Corey Kluber on three days' rest for the second straight start, but things started ominously for the dominant right-hander.

Dexter Fowler led off the game with a solo homer, the first in any Game 7 in baseball history, and it gave the Cubs a quick 1-0 lead. Kluber lasted just four innings and gave up four runs on six hits, two of them home runs, the second of which was hit by Javier Baez in the top of the fifth.

It was the first time in Kluber's career that he didn't record a strikeout in one of his starts.

After five innings, the Cubs' Kyle Hendricks was cruising, and Chicago was up 5-1. During the regular season, Chicago was 78-1 when leading by four runs at any point in a game. It looked for all the world like smooth sailing for the Cubs to win it all.

There is perhaps no one more relieved to see the Cubs win the World Series than Chicago skipper Joe Maddon, who made a series of questionable decisions regarding his pitching staff in Games 6 and 7.

Last night, Hendricks was keeping Cleveland batters off balance with his mix of fastballs and changeups. Through 4 2/3 innings, the National League ERA leader had given up one earned run on four hits with two walks. That second walk, however, with two outs in the fifth, was enough to force Maddon from the dugout to remove the right-hander.

He brought in his ace starter, Jon Lester, who was making his first relief appearance in nine years. And for a moment there, it didn't look as though this move was going to pan out because, with two outs and two runners on, one got away from the left-hander after just 63 pitches.

Lester's wild pitch made the score 5-3 in the fifth, and suddenly, the Indians had life.

However, Lester would bail out his manager by pitching three innings in all and giving up two runs, one earned, with four strikeouts, taking the Cubs into the eighth inning with a 6-3 lead. In 14 2/3 innings in this year's Fall Classic, Lester posted an ERA of 3.68.

Did you happen to hear this was Chicago catcher David Ross' final game ever? It was mentioned once or eleventy-billion times on the broadcast. Ross played a part in the Lester wild pitch scoring two runs, as the ball bounced off his mask and bounded far enough away for those two runs to come home.

There was concern the 39-year-old had suffered a concussion. However, just one inning later, against the heretofore unhittable Andrew Miller, Ross wrote a final chapter to his storybook career.

Ross became the oldest player to hit a home run in a World Series Game 7, and it gave the Cubs a 6-3 lead in the sixth. Lester would continue to deal until two outs in the eighth, when Jose Ramirez hit an infield single off Lester. That brought Maddon back out to the mound to call on his heavily-used closer, Aroldis Chapman.

And that's when things got interesting.

Maddon took a lot of heat for his usage of Chapman in Game 6, bringing him in to pitch the seventh inning with a five-run lead. He finished the seventh, pitched the eighth, and then, after the Cubs scored two more runs to make it a seven-run lead, Maddon sent Chapman back out for one more batter in the ninth before taking him out of the game.

He threw 20 pitches in a game that he didn't need to appear in, following a Game 5 outing two nights before in which he threw 42 pitches, two short of his career high. So there were concerns Chapman wouldn't be as effective in Game 7.

Those concerns were well-founded. Despite continuing to throw in the triple digits on the radar gun, Cleveland hitters seemed to be doing a better job squaring him up. When Chapman's first hitter, Brandon Guyer, stepped to the plate, the Indians had a 5.1% chance to win the game, according to FanGraphs. However, Guyer laced a double to the right-center field gap, which scored Ramirez and cut the deficit to 6-4.

That's when things got really crazy.

Outfielder Rajai Davis, who got the start in center field over Tyler Naquin after the rookie's rough Game 6, helped make look Terry Francona smart by blasting a shocking two-run blast to left field that tied the game at six with the Cubs just four outs away from winning it all.

Chapman would stay in the game and actually came back out for the ninth inning, too. It looked painful, but he somehow pitched a scoreless frame and, over the course of Games 5, 6 and 7, threw 97 pitches.

A World Series this good, with so much history on the line, deserved extra innings, and thankfully, we got 'em.

In the top of the 10th, the Indians had one of their better relievers, Bryan Shaw, out there for his second inning of work. Kyle Schwarber singled, and with one out, Addison Russell was intentionally walked. That's when Zobrist decided to play hero.

The Cubs would add on a much-needed insurance run when Miguel Montero singled home another to make it 8-6. The Indians would threaten one last time, making it 8-7, before Chicago finally secured the 30th out of the game, sending Chicago fans into a crazed frenzy unlike anything seen since before World War I.

For Cleveland, losing the Series after leading 3-games-to-1 is devastating, and their drought will continue, now the longest in MLB. But it was a valiant effort by the Indians. And, the Cleveland Cavaliers' title a few months ago helps cushion the blow.

In the end, baseball got what it needed most. They got one of the most entertaining baseball games in league history in what may have been the most consequential game ever played.

There is no doubt this Game 7 ranks among the best ever played. It is certainly one of the most memorable.

The Curse is now dead, and given Chicago's talent and youth, it's the rest of baseball that may be cursed for years to come.