Raisel Iglesias Has Become a Dominant Closer for the Reds

Contending teams have been spending more money and energy on their relief corps because it's become apparent that a successful run in October is dependent on having a good 'pen. Teams are also cultivating an army of hard throwers with nasty breaking stuff in the minors, just waiting to unleash them upon the masses at the big league level.

And we all know who the great ones are. Aroldis Chapman. Andrew Miller. Cody Allen. Kenley Jansen. Those are just a few of the big-name relievers who we all know are awesome, and now teams are looking to move struggling starters with great stuff into bullpen roles with the idea of finding the next Miller or Chapman.

But there is one of those guys who is not on the tip of every baseball fan's tongue yet who is having a terrific 2017 season for the surprisingly spry Cincinnati Reds -- Raisel Iglesias.

The Reds entered Thursday's action 13-14, much better than the pundits suggested they would be, and the man who has been closing down games for the Redlegs has been darn near unhittable. In 10 appearances, he has saved all 4 of his opportunities with an ERA of 1.17. Out of 182 qualified MLB relief pitchers, that ERA ranks 28th.

Iglesias was pretty good last year in a set-up role, but his overall numbers, as well as the peripheral stats, have all improved so far this year.

His strikeout rate is up and his opponents' batting average is down, thanks mainly to a reduction in line-drive rate. He's also inducing more ground balls, which has helped him allow just one home run. He's also seen a spike in velocity, up from 93.0 mph last year to 95.8 mph this season.

Pitchf/x data from Brooks Baseball shows Iglesias is using his four-seamer a lot more this season while ditching his sinker, which has led to more swings and misses overall. 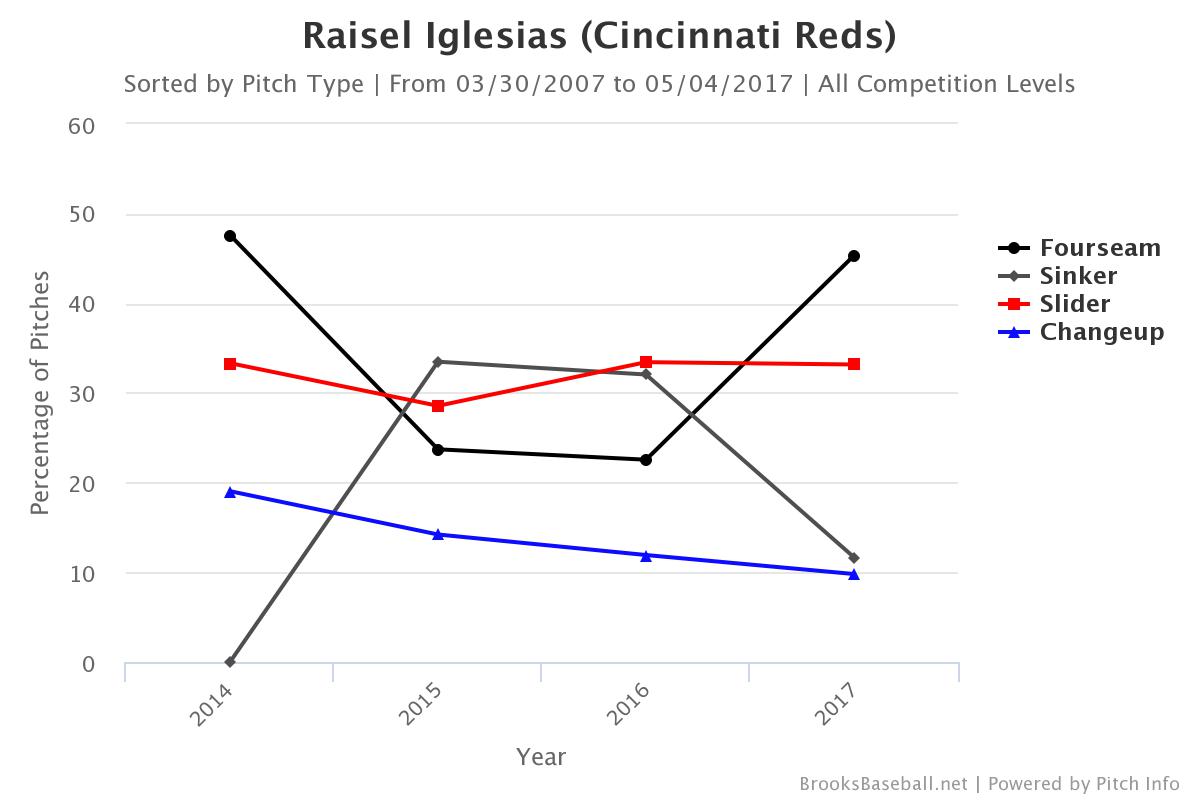 Iglesias is also a converted starter, which is one of the reasons behind him shaking off the shackles of being strictly a one-inning pitcher. He has recorded more than three outs in 6 of his 10 appearances, and has pitched two full innings in four of those appearances. Three of his four saves have occurred in outings in which he's gone more than just one frame.

Iglesias has been one of the best closers in the National League, which is something we didn't expect coming into the 2017 season.