Chaos reigns in the American League.

In the National League, there are really only five teams vying for their two wild card spots, and even that's stretching it. As of August 30, the Arizona Diamondbacks have a two-game lead over the Colorado Rockies for the top spot, while the Rocks hold a three-game edge over the Milwaukee Brewers for the second wild card, with the Miami Marlins 4.5 games back and the St. Louis Cardinals 5.5 back.

According to numberFire's playoff projections, the D-Backs have a 94% chance to reach the postseason, with Colorado at 54.7%. Those are solid odds.

In the American League, things are much different. Coming into play Wednesday, there were eight teams with a realistic shot of making the playoffs. 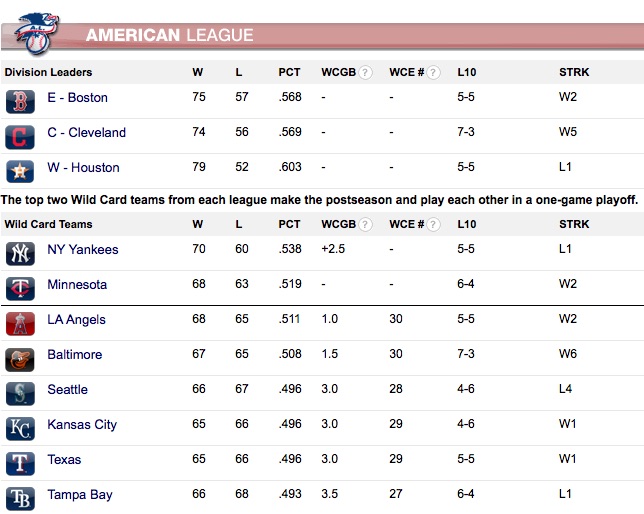 Here are our American League wild card playoff odds, ranking the likelihood of each team playing some October baseball:

With a healthy (for the wild card, at least) three-game lead for the top spot, the New York Yankees appear to be in the best position of all the non-division-leading teams. Yes, Aaron Judge has cooled off in the second half (.179/.341/.352), thanks in part to a shoulder injury that requires regular treatment, but Gary Sanchez (166 wRC+ in August) has helped pick up the slack.

The pitching staff has also done a good job of late, with Masahiro Tanaka and Sonny Gray both providing a solid August, as well as the back of that incredible New York bullpen, led by David Robertson (1.50 ERA in August) and Dellin Betances (0.82 ERA in August). Aroldis Chapman has scuffled (9.00 ERA in his last eight innings) but it's unlikely that will continue for much longer.

Heading into Wednesday's action, the Twins held a slim one-game lead over the rest of the pack for that final wild card spot, not bad for a team that was supposed to be rebuilding. They traded one of their best relief pitchers, Brandon Kintzler, to the New York Mets before the July 31 trade deadline, and yet have managed to go 17-10 this month.

They've been led by three players having incredible months: Byron Buxton (1.8 fWAR in August), Jorge Polanco (1.7 fWAR), and Brian Dozier (1.4 fWAR). Add in Joe Mauer, Eddie Rosario and Miguel Sano, and you've got six everyday regulars with a wRC+ over 120 in August. And the starting rotation of Jose Berrios, Ervin Santana, Kyle Gibson, and Dillon Gee has been rock steady as well.

Even though they sit 3.5 games back, our projections see the Rays as having the third-best odds of snagging a playoff spot. Unlike Minnesota, the Rays were buyers at the trade deadline, but they've scuffled here in August (12-14). Lucas Duda, who they acquired from the Mets last month, has struggled since joining Tampa, batting just .175 this month in 96 plate appearances, although he does have five home runs.

Evan Longoria has a wRC+ of only 88 in August, and the players who carried the offense throughout the first half -- Logan Morrison (112 wRC+) and Corey Dickerson (83 wRC+) -- have tailed off big-time. The good news is the starting rotation has held it together, with a 3.75 ERA this month. There is a ton of offensive talent on this team, which is likely why they have higher odds than some of the teams beneath them.

Major League Baseball needs Mike Trout in the playoffs, and at the moment, his Angels are just one game behind the Twins for that final wild card spot. Trout is healthy and better than ever (175 wRC+ this month), plus the team gotten a solid contribution from C.J. Cron, who is back from his banishment to the minor leagues and is tied with Trout for the team-lead in dingers this month with 7. Kole Calhoun and Ben Revere have also chipped in, and while Andrelton Simmons' bat has cooled a bit in August (83 wRC+), his defense is still the truth.

L.A.'s rotation ERA of 4.27 this month leaves something to be desired, with Parker Bridwell the only starter with an ERA under 3.50 in August.

The Seattle Mariners enter Wednesday tied with the Kansas City Royals at three games back. Nelson Cruz has been bonkers this month (10 home runs in August), but the rest of the Seattle offense has been punchless, managing just 19 combined homers. But with Jean Segura, Kyle Seager, Robinson Cano, and trade deadline pick-up Yonder Alonso all in the lineup together, the expectation is the offense should be fine.

The rotation has been devastated by injuries to their two best pitchers, Felix Hernandez and James Paxton, but MLB.com reports both pitchers may be coming back soon to help with their wild card push.

After Dylan Bundy's complete game, one-hit shutout of the M's on Tuesday, the O's have won six straight to vault themselves to within 1.5 games of the wild card. Bundy is striking out 32.6% of hitters this month with a 2.00 ERA, and Wade Miley (2.60 ERA) and Kevin Gausman (3.48 ERA) are both twirling some outstanding baseball in August as well.

As for the offense, after a slow first half, Manny Machado has been on absolute fire, bashing 12 home runs this month. The entire lineup mashed their way through August, with Tim Beckham, Adam Jones, Welington Castillo, Jonathan Schoop, Seth Smith and Trey Mancini all posting a wRC+ of at least 111 in August.

It's going to be difficult for the Texas Rangers to battle back from the three-game hole they're in after they traded Yu Darvish to the Los Angeles Dodgers last month. Cole Hamels (3.24 ERA) and Andrew Cashner (3.28 ERA) have both tried to hold down the fort without their ace, but no one else in the rotation has an ERA under 4.19 in the post-Darvish era.

Hitting-wise, Texas still kills the ball. Joey Gallo has 11 bombs this month, and seven regular starters all have a wRC+ over 100 in August. Offensively, the team is in good shape. But if they want to sneak into the postseason, pitchers like Martin Perez and Tyson Ross will have to pitch better, and the bullpen's 4.32 ERA this month will have to improve as well.

On Tuesday, the Kansas City Royals' losing streak and scoreless streak both finally came to an end. They had lost five in a row and had not scored a run in 45 consecutive innings until last night's 6-2 win over the Tampa Bay Rays, putting them three games back of the wild card. (The scoreless streak, by the way, was the longest in the Majors since the mound was lowered in 1969, and three innings short of the record, 48, held by the 1968 Cubs and the 1906 A's. Ugh.)

K.C. has also been hit by some off-field distractions. Their best starter, Danny Duffy, is on the 10-day DL with an elbow strain and was arrested this week for a DUI. While entire rotation has been a mess in August, the Royals have the pedigree and more postseason experience than anyone on this list, so don't be surprised if they deliver a red-hot in September.