Just a few days ago, people were asking if Game 2 of the 2017 World Series was the greatest non-elimination baseball game every played.

In what may have been the wildest baseball game in postseason history, the Houston Astros out-slugged the Los Angeles Dodgers Sunday night, winning 13-12 in 10 innings to take a 3-2 lead in this best-of-seven series. The Astros are now just one win away from their first world championship in franchise history.

This game was completely nuts, as evidenced by the FanGraphs' win probability chart. 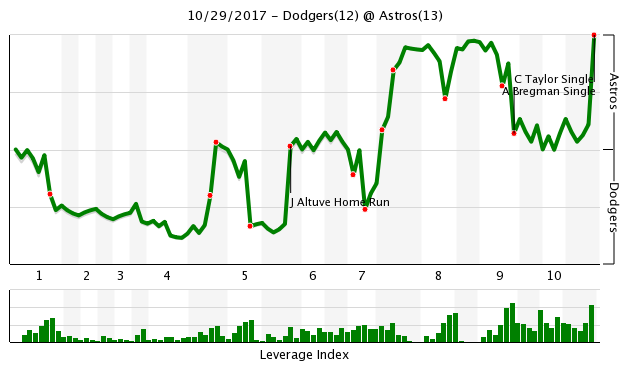 It was only the second time in the Fall Classic that both teams scored at least 12 runs in a game (the Toronto Blue Jays beat the Philadelphia Phillies 15-14 in Game 4 of the 1993 World Series), which is even crazier considering the two starting pitchers for Game 5 were Cy Young-caliber hurlers in Clayton Kershaw and Dallas Keuchel. The Dodgers blew a four-run lead and three-run lead, both with Kershaw on the mound, and Houston hit three game-tying home runs before finally winning on a walk-off in the 10th.

The only way to make sense of this game is to go through it chronologically, so strap in and enjoy the vertigo.

Keuchel came into Game 5 with a 3.00 ERA in four starts, including a Game 1 outing in which he went 6.2 innings and gave up just 3 runs on 6 hits. He did not have his best stuff last night, though, lasting just 3.2 innings while giving up 4 runs (3 earned) on 5 hits with 2 walks and 4 strikeouts. L.A. jumped out to a quick 3-0 lead in the first inning, then chased Keuchel after tacking on another run in the fourth. At this point, the Dodgers had an 87.6% chance of winning the game.

But Houston would battle back off the greatest pitcher in the game today, who had another postseason outing he'd like to forget.

Kershaw and the Taters

Kershaw came into the 2017 postseason with a 4.55 ERA in 89 career postseason innings, but had put together an outstanding October going into Game 5, evidenced by a 2.97 ERA in four starts. That included a terrific effort in Game 1 in which he went 7 innings and gave up 1 run on 3 hits with 11 strikeouts and no walks.

And now, the best pitcher in baseball had a four-run lead. Since the start of the 2012 season, the Dodgers were 49-1 (including the postseason) in games in which Kershaw had been given at least a four-run lead, including 17-0 this year. But in the bottom of the fourth, after a George Springer lead-off walk, an Alex Bregman fly out, and a single by Jose Altuve, Houston was in business. A Carlos Correa double to left made it 4-1 and brought up the maligned Yulieski Gurriel with runners on second and third with one out.

That blast swung the odds in Houston's favor, who now had a 53.2% chance of winning Game 5, according to FanGraphs. That was just the beginning, though.

The following inning, the Dodgers answered right back off a tattered Houston bullpen. Collin McHugh entered the game and promptly walked the first two hitters before striking out Kike Hernandez, bringing the suddenly reborn Cody Bellinger to the dish.

All of the home runs. LOUD NOISES.

It was now 7-4 and the Dodgers had an 83.5% chance of winning Game 5. Kershaw had been given a reprieve and now had another three-run lead with which to work. Surely that lead would survive, right?

Kershaw had retired the first two hitters before giving up walks to Springer and Bregman, which prompted manager Dave Roberts to bring in Kenta Maeda, who served up that gopher ball to Jose Altuve, improbably tying the game at 7-7. During his appearance, Kershaw allowed his eighth career home run of the postseason, which is the most of any pitcher in baseball history.

As for Altuve, that was his seventh homer of the postseason, tying Daniel Murphy (2015) for the most home runs by a second baseman in playoff history.

Game 5 was now fully in the hands of the bullpens, which has meant lots more runs in this series.

And after their stunning comeback against Kershaw, Houston piled on the dingers. Following a Bellinger double that put L.A. back on top 8-7 in the seventh inning, Houston came roaring back thanks to two more long balls by Springer and Correa.

Houston now led 11-8 going into the eighth and had a 93.4% chance of winning Game 5. Unfortnately for the Astros, their bullpen has been extremely hittable this postseason (5.94 ERA) and the Dodgers took advantage.

Corey Seager hit an RBI double to make it 11-9 in the eighth, which was then cancelled out by a Brian McCann dinger in the bottom of that frame. In the ninth, with Chris Devenski in to try and lock down a save with a three-run lead, Yasiel Puig hit a one-handed, two-run blast to make it 12-11 (clip at 5:30 mark).


Then after an Austin Barnes double, Chris Taylor decided more baseball needed to be played.

This crazy, insane, mind-blowing game was now tied 12-12, and after Kenley Jansen pitched a scoreless ninth, they were headed for extra innings.

In the 10th, Houston got a clean inning from Joe Musgrove and came to bat against Jansen again, who was asked to get three more outs. He wouldn't make it out alive.

Jansen got the first two hitters out, but then hit McCann with a pitch and walked Springer. That brought up the rookie, Alex Bregman, to the plate.

Walk it off, @astros.

And with that, the Astros had won Game 5 by a score of 13-12, making them one win away from getting a parade in downtown Houston.

In a game that featured so many massive swings of emotion, it helps to see the lead changes all together to get a better idea of the craziness we just witnessed.

McCann's homer in the eighth was the 21st hit in the World Series, tied for the most ever in a single Fall Classic, with the 100 dingers slugged in the 2017 postseason is also tied for the most all-time. And there is still at least one more game to go.

The game lasted five hours and 17 minutes, making it the second-longest game in World Series history (Game 3 of the 2005 World Series was the only one longer). Houston also became the fifth team in MLB history to overcome three deficits to win a World Series game, too.


Houston is the first team in history to have at least five different players hit a home run in a single World Series game, and there may be no other statistic that better encapsulates what a crazy Fall Classic this has been than this.

The Dodgers now get to head home for Game 6 and, if necessary, a Game 7, but they'll have a tough task on their hands -- Justin Verlander will be taking the ball for the Astros, looking to close things out. The Dodgers will counter with Rich Hill, who is no slouch.

And of course, last night's drama means the odds of winning this series have dramatically switched back into Houston's favor, too.

It's not often a sporting event lives up to the hype, but the 2017 World Series between these two 100-win teams is proving to be one of the best and, perhaps, the most dramatic, Fall Classic ever played.