Despite having the best player in baseball, Mike Trout, on their roster, the Los Angeles Angels aren't a stellar ball club in 2016.

Overall, we see them as the 24th-best team in Major League Baseball, roughly 1.2 runs per game below a league-average squad.

Every win for them matters, and they stole one last night against American League West rivals, the Oakland Athletics.

The Angels trailed 4-3 entering the top of the ninth on the road with the 6-7-8 hitters due up -- that's Andrelton Simmons (whose career wRC+ of 84 is well below league average), Ji-Man Choi (who's got eight career plate appearances at the MLB level), and Geovany Soto (a future hero) in case you didn't happen to know the bottom of the Angels' order last night off hand.

Per FanGraphs, the Athletics owned a 84.8% chance to close out the game before the inning started. Sean Doolittle -- who owns a career SIERA of 2.46 -- entered the game to close it out for the A's.

A first-pitch fly out from Simmons increased Oakland's odds to 91.8%.

Then, C.J. Cron pinch hit for Choi, waited out a 3-1 count, and eventually walked on six pitches. Oakland's odds dropped to 83.8%.

Craig Gentry was subbed in to pinch-run for Cron, but it turns out that the swap wasn't necessary.

Soto's bomb swung the game into the Angels' favor -- naturally -- and their win probability spiked to 83.4%. 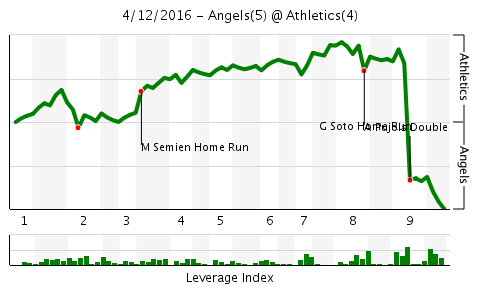 Afterwards, a Johnny Giavotella pop out and a Carlos Perez fly out bookended a Yunel Escobar double, ending the top-half of the ninth, but the damage was done.

In the bottom of the ninth, Huston Street set down the A's bats -- Coco Crisp, Jed Lowrie, and pinch-hitter Stephen Vogt -- in 1-2-3 fashion to secure the Angels' fourth win of the season.

With a 20% chance to win the American League West, per our algorithm, the Angels boast the second-best odds to take the division crown (the Seattle Mariners own a 24.4% chance).

It's got the making of a tight race by season's end, and this two-run shot by Soto could wind up being a difference-maker come September.