Can Dylan Bundy Be the Pennant-Race Ace the Orioles Need?

Over the years, the Baltimore Orioles have had trouble getting their young starting pitchers to produce at the Major League level.

Coming into the 2016 season, three of their top young arms, Brian Matusz, Kevin Gausman, and Dylan Bundy had all either underperformed or been injured to the point where it seemed like their young careers were on the skids.

Matusz has since been traded to the Chicago Cubs and is trying to find his footing. Gausman, still just 25, is performing adequately, if not spectacularly for the O's, with a 4.18 ERA and a 4.55 fielding independent pitching (FIP) in 18 starts this season, with 8.62 strikeouts per nine innings and 2.26 walks per nine innings in 103 1/3 innings.

But after shutting down a potent Texas Rangers offense on Tuesday night, Bundy looked downright dominant. He allowed just one hit and one walk with seven strikeouts, carrying a no-hitter into the sixth inning of the Orioles' 5-1 win over the Rangers.

Bundy throws hard, with a fastball that can get up to 98 miles per hour and averages 94. He also throws a change-up and curveball, both above average pitches, especially when he is locating his fastball.

On Tuesday, Bundy really featured the fastball, throwing it nearly two-thirds of the time, per Brooks Baseball, his highest percentage of the season. He mixed in the changeup about 20% of the time and the curveball 13.6% of the time against a newly potent Texas offense, featuring newcomers Carlos Beltran and Jonathan Lucroy.

The Orioles, who did not make a big move at the trade deadline for another starting pitcher, are clearly hoping Bundy will act as a midseason acquisition for them.

After his previous start against the Colorado Rockies, The Washington Post's Nick Pollack went into great detail breaking down Bundy's transition to the rotation so far, noting there is still some work to go with his fastball. 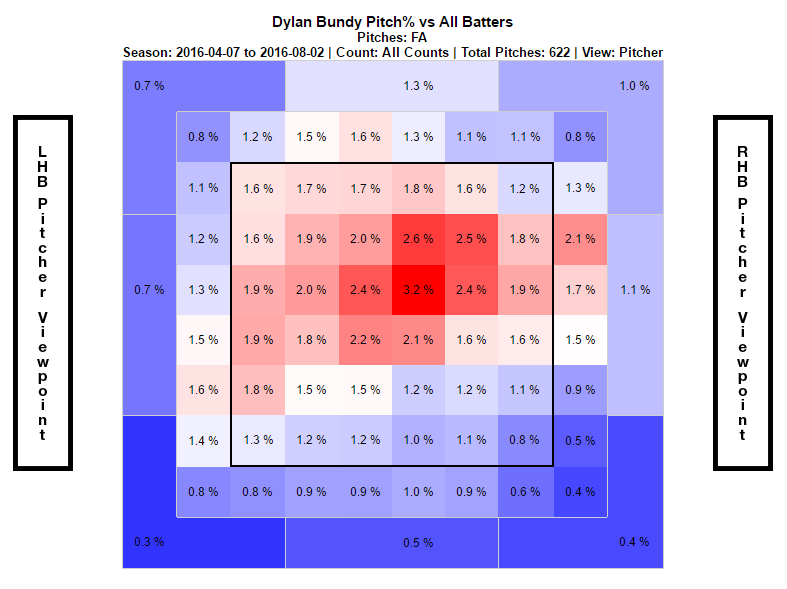 That's a lot of fastballs over the heart of the plate, which Major League hitters typically do not miss. Conversely, he's missing too often with his curveball, throwing too many of them too far low and away to get right-handed hitters to chase. 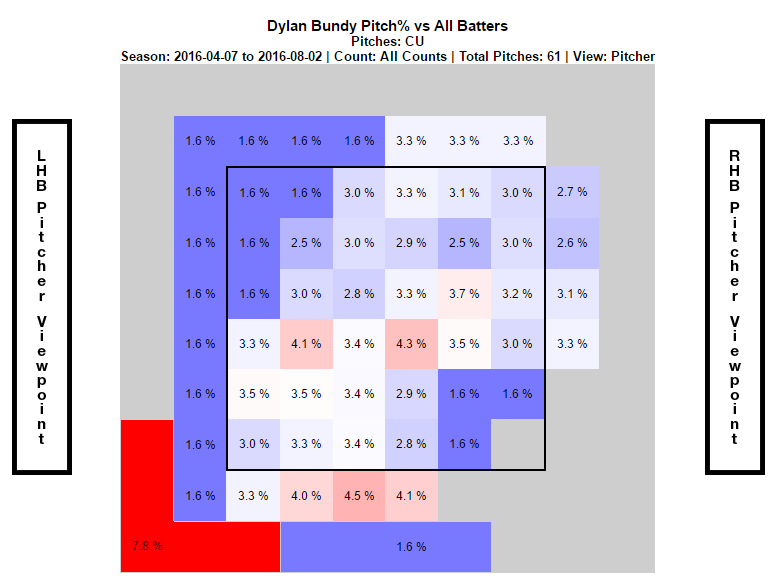 Batters are swinging and missing at the pitch just 4.9% of the time this year on that pitch. His changeup is the off-speed offering that is generating more swings and misses, with a 22.3% whiff rate. Opponents are batting .220/.270/.441 against that pitch.

On Tuesday night, it was all about the fastball, with Bundy moving it up and down in the zone with mastery. He retired 20 of the 22 batters he faced for his first career quality start in his fourth attempt. And he did it against one of the best lineups in the American League.

It's far too soon to call Dylan Bundy the "ace" the Orioles need. But the stuff is there, and if he continues to progress, he could be the guy Baltimore depends on as they continue to battle the Boston Red Sox and Toronto Blue Jays in the American League East.