The Sam Bradford Trade: Why Did the Vikings Give Up So Much?

Far too often in the football community, we like to entertain baseless speculation on whether or not a player might get swapped from one NFL team to another. Even if Team A has a glaring hole at that position and Team B has a glut of quality players there, there are countless possible reasons why they may not make a deal. Maybe they canâ€™t get better value back than they paid. Maybe heâ€™s the safe option behind a star. Maybe the star is too popular with the fans, and this would be a big PR hit to the team.

Whatever the reason, we always try to remind ourselves: this isnâ€™t a video game, so we canâ€™t just swap pieces around all willy-nilly.

Then trades like the one that broke today happen, where the Philadelphia Eagles made yet another Madden deal by sending quarterback Sam Bradford to the Minnesota Vikings for a 2017 first-round draft pick and 2018 fourth-round pick (that could become a second). The Vikings usually hoard draft picks like a dragon in a dungeon, but was this trade worth it for either team? And what will be its ramifications for fantasy football?

What will be the fallout of this trade?

I Am Error: The Vikings Trade a Fortune

With a young roster another year wiser in 2016, it seemed likely that the Vikings would once again challenge the ever-dominant Green Bay Packers for the NFC North division crown. That is, until fledgling quarterback Teddy Bridgewater suffered a season-ending leg injury this week that has also put his career at risk.

Today, by acquiring Sam Bradford from the Eagles, the Vikings are pushing all of their chips into the table on the depth and strength of this iteration of their franchise. They know that -- with almost-certain Hall-of-Famer Adrian Peterson getting into the twilight phase of his career and a young roster full of talent that will need their contracts extended for big money soon -- they needed to capitalize on the momentum they have right now.

But was Sam Bradford worth it?

If we look at numberFireâ€™s analytical measure of value, Net Expected Points (NEP), we can see just how much Bradford brings to the table for Minnesota. If you're unsure what NEP is all about, check out our glossary.

The table below compares the combined Passing NEP over last two years of both Bradford and Teddy Bridgewater. Will Bradford provide a major boost to this offense?

If Bridgewater was worth the 32nd overall selection in the 2014 NFL Draft, and the Vikings believe they can truly win a Super Bowl in the next year or two, then Bradford is also probably worth the 32nd pick in the draft. He has nearly identical passing rate production to Bridgewater, and has actually been slightly better in his most recent seasons. The Vikings also swapped a pick that could become a 2018 second-round selection, though, which makes this a dangerously dicey move for the team's future.

Where this gets even more muddy, of course, is that Bradford has a track record of being terrible in the NFL. The chart below shows Bradfordâ€™s annual Passing NEP per drop back rates since being drafted in 2010. 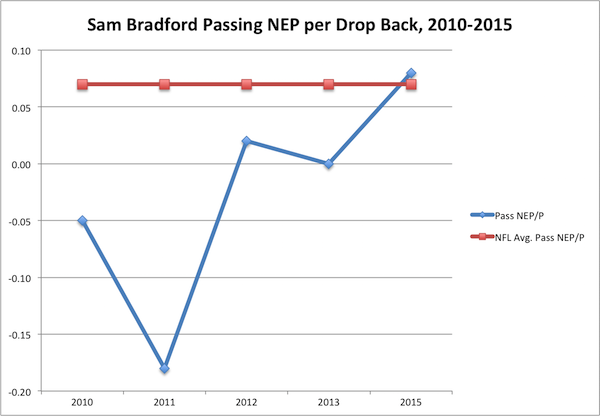 It's clear that Bradford was terrible early on in his career, but we also have to remember that the 2010 St. Louis Rams were coming off the worst three-year stretch of NFL play since World War II. The Ramsâ€™ roster in this span of time was completely devoid of talent, outside of running back Steven Jackson. The Ramsâ€™ top-three receivers in 2011 -- Danny Amendola, Brandon Lloyd, and Brandon Gibson -- missed a combined 12 games that year. Bradford played on a horribly regressive offense, with a myriad of bad talents around him. Sure, the first-overall selection that year should do more to better a team, but itâ€™s hard when youâ€™re pulling a franchise up from the lowest lows anyone has seen in the modern era.

In 2015, Bradford played for the first time at a Passing NEP per drop back that was league-average or better (compared to the last five years' average), and if we excuse the injury-shortened and abhorrent 2011 season, there is a fairly linear trajectory upward for his play. I donâ€™t believe the 2015 was an aberration, but no one should expect Bradford to be a franchise savior.

Sam Bradford is merely keeping the Vikings afloat in their window of contention. The magnitude of this trade makes it incredibly likely the Vikings have concerns about Bridgewaterâ€™s availability for the 2017 season as well as this year. With Bradford under contract through next season as well, it gives Minnesota a chance to keep competing while it figures out how to move forward from a tragic injury to their franchise quarterback and their future hopes.

All Your Base Are Belong To Us: The Eagles Rebuild Continues

The Eagles have traded away a ton of salary and unnecessary leftovers from the Chip Kelly regime this offseason. Linebacker Kiko Alonso and cornerback Byron Maxwell were dumped off to Miami, running back DeMarco Murray was shed to the Tennessee Titans, and now Bradford has been sent packing. Through all these deals, weâ€™ve seen that the Eagles know this can be a year they take a backseat in the NFC East and figure out the identity of their franchise while new head coach Doug Pederson gets his feet wet in the City of Brotherly Love.

This clearly means that Chase Daniel and Carson Wentz will be the quarterback duo for the Eagles this year, and late-breaking news today has confirmed that (if healthy) rookie Wentz will start Week 1 against the Cleveland Browns. This is a massive amount of confidence in a quarterback that the team recently said needed plenty of seasoning still before he gets to start, but they must want the high-upside Wentz to get a taste of real action as soon as possible.

This trade is another savvy move for general manager Howie Roseman, who gets a pile of draft picks equal to what they traded for Sam Bradford in the first place. Itâ€™s an easy win for the Eagles in the long-term, and may not hurt them much in the present either.

The most obvious fantasy winners of this trade are the Vikingsâ€™ receiving options. Wide receiver Stefon Diggs' average draft position (ADP; per Fantasy Football Calculator) had plummeted nearly a round in the last four days, since Bridgewaterâ€™s injury. Heâ€™s now going in the middle of the ninth round, but numberFire still projects him as our 33rd-best wide receiver, a good pick in the early eighth. Heâ€™s now an even better value than before.

Tight end Kyle Rudolph could also have some sneaky value. When Jared Cook was on the Rams with Bradford, he had a full-season pace of 786 receiving yards and 5 touchdowns on 101 targets. Zach Ertz played 14 games with Bradford last year, and was on a full-season pace for 961 yards and 2 touchdowns on 123 targets. Rudolph has been looked at a fair amount in the red zone, but has just 4.20 targets per game over the last two years; five-to-seven targets per game could be well within reason. Heâ€™s currently going undrafted.

Carson Wentz could seize the starting job for the Eagles from Week 1 on. As the future of the franchise, he should have a long leash and plenty of chances to make mistakes. If we extrapolate numberFireâ€™s current projection to 500 passing attempts, Wentz would put up 3,843 passing yards, 20.26 touchdowns, and 15.71 interceptions. He could also chip in 225 rushing yards and 2.15 touchdowns on 55 attempts. That would be around 238.74 fantasy points -- still just the 31st-best quarterback in fantasy purposes.

However, wide receiver Jordan Matthews could be an excellent security blanket receiver for Wentz this year, as a large possession receiver who will work the short area in the slot. Matthews has stagnated around the early-sixth round in ADP, but is worth much more than that as the primary receiver in this offense. We project him as an early-fifth round receiver in PPR formats.

Running back Ryan Mathews could see more work if they try to establish the run to take pressure off their young passer and allow him some play-action help. We currently project him as the 14th-best running back in PPR, but heâ€™s going as the 25th. Darren Sproles, too, is the 45th-drafted running back in PPR drafts, but had been projected as the 34th-best back. Heâ€™s well worth a ninth-round flier, as Sproles excels on short routes from the backfield, and the short passing game could be this Eagles teamâ€™s bread-and-butter under Pederson and Wentz.

The Eagles Should Start Sam Bradford Over Carson Wentz

The Minnesota Vikings Can Still Make the Playoffs Without Teddy Bridgewater