Brandon Gdula  —  @gdula13 Nov 7th, 2016
Share on Facebook Share on Twitter
The Vikings were nearly a lock to win in Week 9 late in the game and improve to 6-2, but the Lions defied the odds -- again.

It's not really news at this point that the NFL's television ratings are down -- even for primetime games -- but that's not to say that the NFL is no longer exciting.

Really, the most exciting game of Week 9 was -- based on win probability from numberFire Live -- the Detroit Lions' comeback over the Minnesota Vikings.

Just check out the win probability on this sucker. 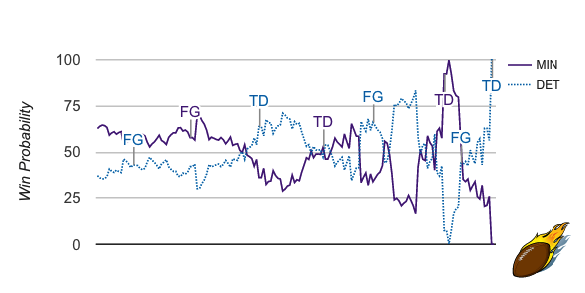 If it looks like the spikes hit 100% near the end there, it's because they almost did.

But before the Vikings nearly put the game away, they were in a pretty desperate spot of their own.

With 3:38 left in the fourth quarter down by four, Sam Bradford threw incomplete to Adam Thielen, leading to a 3rd-and-7 with 3:35 left on their own 24 yard line. Their win odds dropped to a game-low 16.58%.

A Matt Asiata 1-yard gain on the ensuing first down dropped their odds to 46.12% at the two-minute warning.

After the break, the Vikings inched closer, causing the Lions to burn their remaining two timeouts. Seven plays after the two-minute warning, the Vikings had the ball two yards from the end zone and called a timeout with 27 seconds left. On the following play, Rhett Ellison took an end-around into the end zone to give the Vikings a 15-13 lead.

Detroit got the ball after a touchback with 23 seconds left and a 7.53% chance to win, now that the ball was actually in their hands. Based on history, it probably could have been even lower.

On the final drive in regulation, Matthew Stafford connected with Golden Tate for 8 yards and then Andre Roberts for 27 before a spike with 2 seconds left at the Minnesota 40.

Matt Prater connected with a 58-yard field goal to send the game to overtime.

Detroit got the ball to start overtime, and they didn't give the Vikings much of a chance.

The Lions converted on three third downs before being faced with a 3rd-and-8 on the Minnesota 28. Stafford connected with Tate again to pick up what seemed like yet another first down on the opening drive of overtime.

Tate, though, had other ideas, eluded two defenders, and flipped into the end zone to give the Lions a come-from-behind victory.

Entering the week, our algorithms saw the Lions as the 24th-best team in the league and the Vikings as the 6th-best. The Vikes had an 87.3% chance to reach the playoffs and a 66.8% chance to clinch the division -- compared to 6.3% and 1.8% for the Lions.

Detroit is now 5-4 despite trailing in the fourth quarter in all nine games this season. They aren't making it easy on themselves, as they have had an 18.09% or worse chance to win at some point in their five eventual wins, per numberFire Live, but they are still in the thick of the NFC North.

NFL Draft Betting: How Many LSU Players Will Get Selected in Round 1?