Three weeks remain in the 2016 NFL regular season. While that doesn't seem like very long, there's still a lot to unfold in that time frame.

Three teams have odds of winning their division at 96.4 percent or more, but the other five divisions have at least two credible threats. We still have no idea who the league MVP is going to be or who the front-runners even are.

Two teams have a greater than 25 percent chance of winning the Super Bowl, but this season of no great teams could be primed to see an unsuspecting squad take off at the right time to make a run. A team that snuck into the top-five of these rankings for the first time could do just that.

A weekly reminder, our power rankings arenâ€™t subjective, theyâ€™re based off our nERD scores put together by people much smarter than me. For those unfamiliar, nERD is our calculation of how good a team really is, based on expected point differential against a league average team. If the team's nERD rating is 10, they would be expected to win by 10 points against a league-average opponent. All individually noted rankings are based off our Net Expected Points metric, which measures the value of each play on the field based on how an average team would be expected to perform, according to historical data.

Each week, weâ€™ll list all 32 teams from worst to best with a more detailed breakdown of four different teams. The highlighted teams will rotate each week, which will lead to each team being featured two to three times during the course of the season.

Letâ€™s not anoint Matt Barkley as the future starting quarterback for the Chicago Bears, but he has been impressive over his past two starts. In his time playing for Chicago, Barkley ranks 18th among quarterbacks in Passing NEP per drop back. Thatâ€™s not amazing, but itâ€™s well above Jay Cutler, who sits at 35th among 38 quarterbacks with at least 100 drop backs.

Barkley hasnâ€™t played well enough to be considered the starter in 2017 after the Bears likely part ways with Cutler, but he might have played himself into a useful backup role that isnâ€™t the worst gig to have in the NFL. Itâ€™s also possible he finally claimed the title of best quarterback from the 2013 draft class. Yes, the class was that bad.

The hope for the Bears going forward is that the young defense continues to develop.

Chicago is 15th in Adjusted Defensive NEP per play and has pieces to be excited about going forward. Akiem Hicks and Leonard Floyd have seven sacks each, and Hicks is in his age-27 season, while the rookie Floyd is 24. The defensive tackle rotation that features Will Sutton and Eddie Goldman is also young. Sutton just turned 25 years old in October and Goldman wonâ€™t turn 23 until January.

Bryce Callahan, a 25-year-old undrafted free agent, has also been a pleasant surprise as one of the best corners by Sports Info Solutions charting data from Football Outsiders. Callahan is 14th in yards allowed per pass among 92 corners targeted 30 or more times.

Some questions linger about the future of John Fox and Vic Fangio as coaches, but whether the staff stays the same or there are changes made, thereâ€™s a solid group on the defensive side of the ball to build with for the seasons ahead.

The Baltimore Ravens are in a tough spot. Theyâ€™re a game behind the Pittsburgh Steelers in the AFC North and their final three games come against the Philadelphia Eagles, Steelers, and Cincinnati Bengals -- the final two on the road. Our numbers give Baltimore just a 27.7 percent chance at winning the division.

Much of that comes down to the Week 15 meeting with the Steelers in Pittsburgh. In that game, Baltimore currently has a 42.6 percent of winning. While the Bengals are having a down season, the Ravens are currently just barely more likely to beat them in the regular season finale, at 42.8 percent.

At its current performance level, Baltimore would have the third-best run defense by Adjusted Defensive Rushing NEP per play since 2000, behind two other Ravens teams, the 2000 and 2006 units. Hereâ€™s the top five run defenses we have tracked since 2000:

That will certainly help when trying to slow the Pittsburgh running game down, which ranks fourth in Adjusted Rushing NEP per play. Cincinnati is 12th on the ground and Baltimoreâ€™s next opponent, Philadelphia, is 17th.

Thanks to their win against the Buffalo Bills, the Steelers are in the driverâ€™s seat for the AFC North. It also showed just how scary Pittsburgh can be to face with how many ways they can beat opponents.

Ben Roethlisberger was terrible, finishing with -0.13 Passing NEP per drop back due to three interceptions and no touchdowns. His day could have been worse, with two other near interceptions that were dropped by Buffalo defenders.

Luckily for the Steelers, when the passing game isnâ€™t working -- whether it be snow- or quarterback-related -- they can rely on one of the best running backs in the league, which is exactly what they did on Sunday.

Le'Veon Bell carried the team -- literally and figuratively -- for 0.3 Rushing NEP per attempt, which was the third-highest total of the week for backs with 10 or more carries. But that doesnâ€™t exactly do justice to how dominant he was.

Bell carried the ball 38 times, ran for 238 yards, and scored 3 touchdowns. Pittsburgh was so dominant on the ground against the Bills that touchdowns were inevitable before Bell even crossed the line of scrimmage. 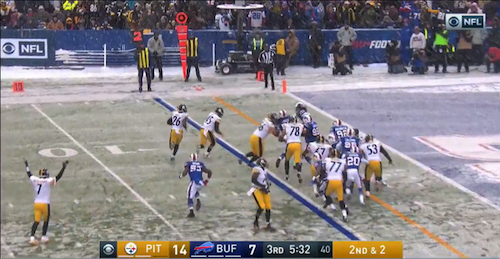 Pittsburgh has a 71.5 percent chance of winning the division thanks to an easier schedule than Baltimore to close out the season. Like the Ravens, they have to face the Bengals on the road, which will come this weekend. But after that, Pittsburgh will host Baltimore, then finish the regular season at home against the Cleveland Browns.

Itâ€™s been a rough couple of weeks for the Seattle Seahawks. They have lost two of their last three games and in the one win -- a 40-7 blowout over the Carolina Panthers -- they lost who may be their most important player in Earl Thomas.

With the loss against the Green Bay Packers in Week 14, the Seahawks dropped to the third seed in the NFC behind the Detroit Lions for the time being. That would mean a second-round playoff game on the road, which has not been kind to the Seahawks this season. Theyâ€™ve been a significantly better team in Seattle.

After Thomas got hurt against the Panthers, we suggested the offense would need to step up to counteract the loss on the defense. That did not happen.

Russell Wilson had one of the worst games of his career against the Packers, with five interceptions and -0.45 Passing NEP per drop back. It could be argued that 3.5 of them werenâ€™t his fault, though. On the first interception, Jimmy Graham fell down before the ball arrived, and the last two interceptions both bounced off the hands of receivers. His third interception was a poorly placed deep ball, but it bounced off the back shoulder of the covering cornerback with borderline pass interference and into a safetyâ€™s hands.

But even if those bounces went Seattleâ€™s way, Wilson was still off. He missed a deep throw that would have been a touchdown to Doug Baldwin early in the game and also missed a wide open Graham down the seam later on.

The Seahawks currently rank just 17th in Adjusted NEP per play on offense. Thatâ€™s not going to be good enough to carry them through the end of the year and on a playoff run.

Suddenly, thereâ€™s life again in the Packers. However, the slow start and the string of wins put together by the Lions have still placed them on the outside looking in for a playoff spot. We have Green Bay with a 34.4 percent chance of making the playoffs, 28.7 percent of that from winning the NFC North.

Green Bay does have a schedule that could allow them to â€œrun the tableâ€ as Aaron Rodgers suggested at the end of November. Theyâ€™ll play the Bears on the road in Week 14, host the struggling Minnesota Vikings in Week 15, then finish in Detroit against the Lions, which could have the division on the line.

If there was hope things are clicking at the right time for the Packers, Sundayâ€™s game against the Seahawks was it. Green Bayâ€™s struggles on offense were always a little exaggerated because they were performing fairly well, just not dominating. The Packers are now seventh in Adjusted NEP per play on offense and Rodgers is sixth among quarterbacks in Passing NEP per drop back.

Still, the Seattle game gave hope that the dominant offense could still be unleashed. The offense had little problem advancing the ball and the concepts helped that happen. Jordy Nelson scored one of his two touchdowns on a crossing route against zone coverage in the red zone that saw him unsuccessfully picked up by linebackers, which is advanced physics compared to some of the routes Green Bay was running earlier in the season.

Meanwhile Davante Adams has turned into a legitimate receiving threat on the outside, 14th among wide receivers in Reception NEP per target. His was the recipient of a few great Rodgers throws during the game, like the one at the two-minute warning in the first half, where Rodgers flicked his wrist with an unblocked defender in his face and threw a strike down the sideline.