It took until the seventh game of the playoffs, but we finally got a good one between the Green Bay Packers and Dallas Cowboys.

It was beyond good, actually. It was great. It was crazy. What took it over the top from entertaining game we were desperately hoping for to an instant classic were the last two minutes of the fourth quarter.

But on several occasions during those two minutes, we were close to not getting any of it. From bad plays to poor coaching decisions, there were multiple times when the game could have turned a different way than it did.

Letâ€™s start on the first play after the two-minute warning.

The Packers were already four plays and 30 yards into what would be a go-ahead drive. It was 1st-and-10 from the Dallas 45-yard line, and the Packers motioned out to an empty set pre-snap. Ty Montgomery motioned from the backfield to the outside right of the formation and was the target on a deep pass down the sideline.

The Cowboys got pressure on Rodgers, and instead of the quarterback rolling out of the pocket, he backpedaled and heaved a pass off his back foot.

The throw was intercepted, but a penalty for pass interference gave the Packers a first down on the 35. While the result of the play was a 0.66 boost in Net Expected Points (NEP), it actually dropped Green Bayâ€™s win probability 2.32 percent from 71.0 percent to 69.84 percent, per numberFire Live.

There are many questions about this play because, unlike most penalties on Aaron Rodgers' deep passes, he couldnâ€™t have known about this one before the ball was thrown.

It was a rare, ill-advised pass off his back foot under pressure which was either just thrown up for grabs or failed to get out of bounds. Either way, the Packers caught a break, and we carry on. (Video courtesy: NFL Game Pass)

The next play was a two-yard gain on the ground from Montgomery, and after a Dallas timeout, the Packers faced 2nd-and-8 from the Dallas 33. Instead of throwing again to push the ball down field and play for a possible touchdown, the Packers came out in a heavy formation with every player lining up at the line and between the numbers with a fullback also in the backfield.

Coaches believe this gives the offense blocking leverage, but in reality, thatâ€™s taken away by the amount of defenders that also come to the line.

Hereâ€™s the play pre-snap. The Packers basically ran against an 11-man box on 2nd-and-8, 13 yards from the red zone. 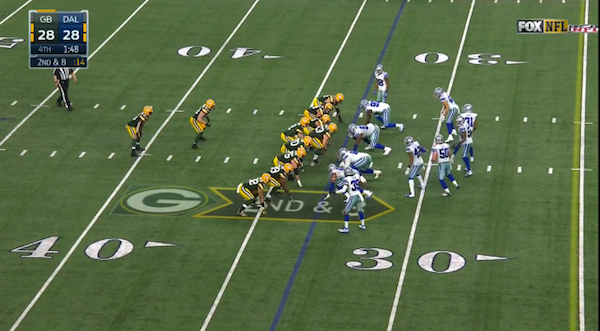 Montgomery was stuffed on the play for a loss of five yards, and the Packers' win probability dropped by 22.1 percentage points. It would be the third-biggest win probability swing in the final two minutes, and it could have easily cost the Packers the win.

At this point in the game, the odds of a sack or interception are far lower than a run play getting stuffed behind the line, but the Packers were done in by one of the most conservative calls a team could make in that situation. The only thing more conservative would have been a literal kneel, and even that would have lost fewer yards.

After an incomplete pass on third down, the Packers settled for a 56-yard field goal.

The Spike and the Pass

Dallas got the ball back with 1:33 left in the quarter with one timeout -- down by three -- and with a 23.13 percent chance to win. The Cowboys moved the ball 36 yards on their first two plays from their own 25, to the Green Bay 40. With the clock running and and a first down, the Cowboys spiked the ball with 49 seconds left at the 40.

The spike alone cost the Cowboys 4.20 percentage points in terms of win probability.

With a timeout left, the Cowboys forfeited a down that could have been used for a real play. With 49 seconds, one timeout, and not yet in field goal range, Dallas wasnâ€™t in immediate danger of running out of time, but with one fewer down, they were much closer to running out of plays. It should also be mentioned that the spike itself took two seconds off the clock.

The next play went for a gain of seven, which set up a 3rd-and-3 for the Cowboys. At this point, Dallas needed to balance between trying to score and not leaving too much time for the Packers to get the ball back. With how well the Cowboys had run the ball on the Packers -- Ezekiel Elliott was worth an impressive 0.13 Rushing NEP per attempt during the game, just above his regular season number of 0.11 and well above the NFL average this year of -0.02 -- a run probably would have served both goals.

Elliott was notably absent from the game plan on the final drive, but his lack of touches was not the reason Dallas lost. Ignoring the spike, Dak Prescott ended this drive 3-for-4 for 42 yards.

On the third down, Dallas was the team that motioned to an empty set, and Prescott was asked to throw again. Prescott got hit as he threw and the pass did not make it past defensive lineman Nick Perry, who batted down the pass at the line for an incompletion.

Dallasâ€™ decision, though, did match their M.O. during the regular season, to an extent.

The play cost the Cowboys 6.02 percent win probability, and they were forced to kick a 52-yard field goal with just 12 seconds off the clock since the first down spike.

We know how it ends. The Packers started from their own 25 with 35 seconds remaining. Their first four plays included two incompletions, a 17-yard pass, and a sack that lost 10 yards. All of this brought up a 3rd-and-20 from the Green Bay 32 with 12 seconds left in the game.

The resulting play -- the 36-yard pass to Jared Cook -- will not soon be forgotten.

It would be one thing if this was where that story ended, but there was more per Robert Klemko of The MMQB:

Cobb said the final play was not an actual playcall. Rodgers just told each receiver what to do, like a kid drawing in the dirt. Seriously.
â€” Robert Klemko (@RobertKlemko) January 16, 2017

Thatâ€™s not exactly standard operating procedure for a play of this nature, but this is Aaron Rodgers weâ€™re talking about. Rodgers has been known in his career for pulling plays out of nowhere, but this is another level.

The broadcast did not show much of the huddle before the play, but there is about a second of it shown where it does appear that Rodgers is signaling routes to his receivers with his arm.

The next play was a 51-yard game-winning field goal from Mason Crosby with no time left.

It cemented a game that will instantly be remembered as a playoff classic.

Yet, a few better coaching decisions in the final two minutes -- or one at all on the final play -- might have taken away the most exciting ending of the playoffs to date.