Seriously, most of us donâ€™t realize how good we have it when we complain these days. I donâ€™t mean in an â€œentitled millennialâ€ sense, I mean that we NFL fans are absolutely spoiled by the Golden Age of offensive football. When gridiron football historians of the future talk about the â€œglory days," theyâ€™re going to be discussing the period of time thatâ€™s happening right now.

So why are we letting a touchdown-less outing for the Pittsburgh Steelers in their AFC divisional round win cast a pall over what was an historic throwback day for their kicker Chris Boswell?

Itâ€™s easy to look at the 18-16 score that the Steelers triumphed over the Kansas City Chiefs with and be a little concerned with the Steelers' offense, but thatâ€™s just not the case. This throwback, grind-it-out win doesnâ€™t mean anythingâ€™s wrong for the Black and Yellow. Hereâ€™s why.

We all know that the Steelers eked out a victory in which they scored no touchdowns. That seems awful until you look at what actually happened in the game.

The image below shows numberFire Liveâ€™s win probability graph for the Steelers and Chiefs, and while it seems like Pittsburgh came close to blowing the win, they were never really out of the driverâ€™s seat. 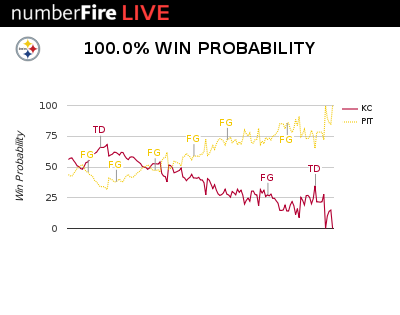 As you can tell from the red lineâ€™s plummet, not once after the 3:38 mark in the second quarter did the Chiefs have a win probability higher than 50 percent. Even when KC scored their second touchdown to pull within two points with 2:47 left in the game, there was still a 65 percent chance the Steelers would escape with a win. Pittsburgh had all their timeouts, they had the ball, and they had a reliable offense that wouldâ€™ve likely been able to drive down far enough to at least earn them a seventh field goal on the day.

Still, when you look at quarterback Ben Roethlisberger's -2.00 Passing Net Expected Points (NEP) on 31 passes from this game, you wonâ€™t be dazzled. A -0.06 Passing NEP per drop back isnâ€™t good (league average this year was 0.12), even if it came against the leagueâ€™s fourth-best passing defense by schedule-adjusted Defensive Passing NEP per play.

That said, we know that Roethlisberger has ugly home/road splits, and the Steelers worked to minimize his use in this game. Excluding the blowout wild card win over the Miami Dolphins and Week 17 (when the playoff-bound Steelers sat their starters), Roethlisberger has attempted just 32.75 passes per game over his last four games played, compared to 39.79 per game for the whole season.

Undoubtedly, the Steelersâ€™ coaches tried to take attempts off of Big Benâ€™s plate so that they didnâ€™t have to rely on his arm the whole way. In an away game against a good passing defense, thatâ€™s not an admission that the offense is bad; thatâ€™s smart game-planning.

The Steelersâ€™ offense has been pretty good this year, ranking ninth-best on the season in opponent-adjusted NEP per play, so why are we concerned about the state of them now?

If itâ€™s their recent play, thereâ€™s nothing to worry about at all.

The tables below compare each major Steelers offensive player between full-season rate stats and NEP production against their averages over the last four games. Also included are Success Rates, or the percentage of plays in which a play generated positive NEP in a specific category.

First up is Roethlisberger.

We see improvement in every single category from his season average to the last four weeks, with the exception of his interception rate -- not too shabby. Fewer attempts means fewer chances to make risky plays and become reckless. The passing offense is doing just fine, even with diminished volume.

What about running back Le'Veon Bell?

Bell also has improved his production over the last four games, and he has even taken on a more immense rushing workload; heâ€™s averaging 25.5 rushing attempts per game instead of his 21.75 regular-season average. The Steelers are going into a ball-control offense, which is perfect to help mitigate their passing struggles on the road.

Finally, how have the receiving options differed between the season and the last four games?

Only tight end Jesse James and Bell have see their receiving value drop over the last four weeks, among the receiving options to see at least 50 regular-season targets. Antonio Brown and Eli Rogers, on the other hand, have jumped immensely in both impact and efficiency.

This indicates that while Roethlisberger isnâ€™t throwing as much, heâ€™s throwing more difficult-to-complete routes to the tight end or running back. While the Steelers are clearly dialing back the passing volume, they seem to be specifically coaxing the passing game along a more difficult plan -- and itâ€™s succeeding.

Even if we believe that Big Ben not throwing as much or posting 224 empty passing yards in the divisional round is a worrisome sign, the fact of the matter is that the offense as a whole is thriving with this newfound â€œrun early, run oftenâ€ approach. With Bell occupying the defense's attention up front, Roethlisberger is getting a chance to challenge defenses down the field without worrying about pinpoint accuracy short.

To Each His Own

With all of that said, we can finally appreciate kicker Chris Boswellâ€™s historic six-field goal day in all of its glory. Itâ€™s no secret why it was impressive: he set a single-game playoff record for most three-pointers made.

No kicking day has been as impactful in recent memory as Boswellâ€™s. He also set a playoff Field Goal NEP record with 5.88 NEP on his six kicks (0.98 NEP per play). For comparison, Denver Broncos bootsman Brandon McManus launched five successful field goals in the divisional round last postseason for 4.81 NEP (0.96 per play).

The only better kicking day overall in the last five years also came from Boswell, who matched his 6-for-6 showing in Week 15 this year by putting up 7.99 Field Goal NEP (1.33 per play). Ironically, even Chiefs kicker Cairo Santos' seven-score day in Week 4 of 2015 only turned in 6.49 Field Goal NEP (0.93 per play).

Although the red zone offense wasn't ideal, the Steelersâ€™ offense as a whole is doing fine, and it's doing what itâ€™s been designed to do. Donâ€™t let your worry get in the way of appreciating a playoff record or this moment for the franchise. With such great talent around Ben Roethlisberger -- including Boswell -- he doesnâ€™t have to carry the Steelers on his shoulders anymore.

Ranking the Kickers Remaining in the NFL Playoffs

Can the Seahawks and Steelers Overcome Their Road Struggles in the Divisional Round?