Justin Freeman  —  @justinfreeman18 Feb 14th, 2019
Share on Facebook Share on Twitter
Teams drafting quarterbacks in the first round are making quite a claim about the state of their franchise. But their spending doesn't make a lot of sense for team-building.

What they should really be called, however, are "opportunity thieves."


Given the structure of today's NFL salary cap and what we know about player development, bridge quarterbacks are detrimental to team-building.

The first thing to realize is that if your team is spending a high equity draft pick on a quarterback, your team is not very good. Over the past five years, teams who drafted first round quarterbacks went on to earn 5.9 wins per season. On top of that, only 2 of these 16 teams made the playoffs, both of which saw exits in the wild card round.

This included the 2018 Baltimore Ravens, who selected Lamar Jackson with the 32nd pick, and the 2017 Kansas City Chiefs, who grabbed Patrick Mahomes with the 10th pick. Of course, absent a meaningless Week 17 start, Mahomes was uninvolved in that Chiefs' campaign. Jackson earned his first start for an injured Flacco in the Ravens' 10th game of the year.

And these are the success stories. For the other 14 franchises who took quarterbacks, they did not reach the playoffs and typically were far removed from relevancy. So, GMs would be wise to consider year one of a first round rookie quarterback to be a season not worth investing in heavily.

The Quarterback You Drafted Stinks

The second thing to realize is that the quarterback you drafted stinks. Don't worry -- this is not a permanent state of affairs. But your rookie quarterback is almost certainly going to play the worst season of his career in year one.

We know QBs age like fine wine, but is there a predictable trend? Turns out the average EPA/Attempt increases with experience year very similarly to a fairly simple natural log model. Bubble sizes are number of QBs in the sample pic.twitter.com/2tI5kSSMoD
— Michael Zingone (@FFzinger) January 25, 2019

Like fine wines, quarterbacks get better with age -- but the jump from year one performance to year two performance is the most important growth in quarterback development. In fact, it largely helps explain my first point, that "your team stinks" in year one.

So, if we know that the team is unlikely to be competitive in a quarterback's rookie year and that developing quarterbacks only get better through experience, why would a team waste resources on a short-term veteran solution? The typical comeback has to do with the rookie "earning his starting spot" or "putting him in a position to succeed" or "going with the guy who gives us the best chance to win."

All of these excuses are signals of opportunity theft -- delaying the necessary growth and development of a vital piece of your franchise in the name of entertaining delusions of a winning season. By playing Tyrod Taylor over Baker Mayfield, Nathan Peterman over Josh Allen, and Sam Bradford over Josh Rosen, coaches are sabotaging their own franchises with short-sighted goals under the veil of player development.

Rookies Are More Prepared Than Ever

Coaches often shield their young signal-callers, thinking the immediate jump into NFL play may be too much for them. But that seems to be changing rapidly. 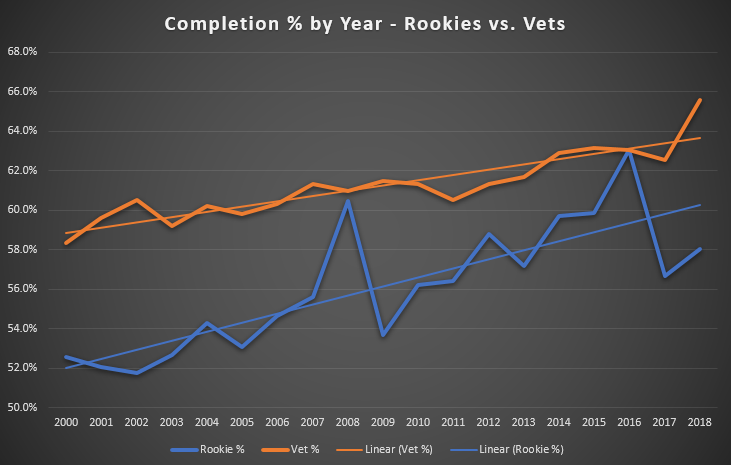 Although the entire NFL is becoming more and more efficient through the air, the gap between rookies and veterans has been closing over the past two decades.

Perhaps this is a credit to college offensive philosophies finding their way more frequently into NFL playbooks, or perhaps NFL rules have made the transition more seamless. But rookies do not represent as large of a drop-off in talent as they once did. Your hot shot rookie acquisition may actually give your team a more competitive chance from day one than your seasoned and high-priced veteran bridge.

The major flaw with the bridge quarterback is the severe misallocation of resources that come in acquiring a Band-Aid at the position and the opportunity cost associated with the cap. The acquisition of a great player (the rookie) at a cheap and locked in cost over five years is a strong advantage for teams given the standardized rookie wage scale.

By comparison, 16 NFL quarterbacks currently earn a salary north of $20 million per year on average. Rookie deal quarterbacks provide the biggest cost savings and most exploitable cap edge in football. This is all for naught though when the cap savings created is used to fund a player who shouldn't even be on the field for the reasons outlined above.

In the NFL, cap is finite. The actual cash value of contracts is of significantly less concern than the percentage of cap that must be allocated to that deal. So, by rule, cap allocated to one player is cap that cannot be allocated to another player. Think of what this allows you to do from a team-building perspective.

In the spring of 2018, a month before the draft, the Cleveland Browns traded that 65th pick (3.01) to the Buffalo Bills in exchange for Tyrod Taylor and his $16 million cap hit in 2018 -- all while possessing the knowledge that they'd be selecting a quarterback in the first round since they controlled two of the top four picks in the draft. This was an egregious error because of how that cap could have been allocated.

The Browns could have used this cap to re-sign valuable veterans, front-loading the cap hit of signing bonuses into 2018 and securing valuable services for years to core players on the roster and in free agency. By eating these costs early in the contract period, the team invests most heavily during the lost first year. The Browns voided that opportunity when they brought in Taylor, who clearly had no part in the Browns' long-term future. Early extensions and front-weighted contracts in 2018 could have allowed the Browns to be major players in free agency for the duration of Mayfield's rookie contract, making them Super Bowl contenders by year three or four.

Digging Through the Data

Taylor and the Browns haven't been the only culprits of bad bridge pay. The Arizona Cardinals paid Sam Bradford $16 million (salvaging a one-year, $20 million contract by cutting him early) in 2018. Josh Rosen went on to start in Week 4, and the Cardinals will carry another $5 million of dead money from Bradford into 2019. Bad decisions tend to linger for poorly run franchises.

Scenarios like Joe Flacco and Alex Smith with Lamar Jackson and Patrick Mahomes, respectively, are a bit different. At least in these scenarios, the selections and decisions were more of succession planning on existing quarterback deals than actual bridge quarterback acquisitions. Given how each team was able to trade its incumbent the following offseason, this strategy has worked out quite well for both clubs.

Among the other terrible bridge quarterback deals in recent memory are Mike Glennon's $14 million cap hit to unsuccessfully lead the Chicago Bears ahead of Mitchell Trubisky, and the Buffalo Bills, who had to eat $7.64 million in cap just to discard Tyrod Taylor, all while still eating $4.1 million for A.J. McCarron and insisting that Nathan Peterman should start Week 1. Luckily, that didn't last long. Although the New York Jets were wise enough to hand over the reigns to Sam Darnold in Week 1, they still employed Josh McCown, who represented a $10 million cap hit that could have been allocated elsewhere.

Overall, this isn't a very difficult subject to objectively analyze. First round rookies need to play right away, and you should forget about championship aspirations in year one. Instead, use that opportunity to give your quarterback the experience he desperately needs and disperse player-friendly, front-loaded contracts to valuable pieces of your roster. By the third year, with a little luck and great evaluations, you'll be in position to compete.