Fantasy Football: 5 Wide Receivers Whose Efficiency Should Improve in 2019 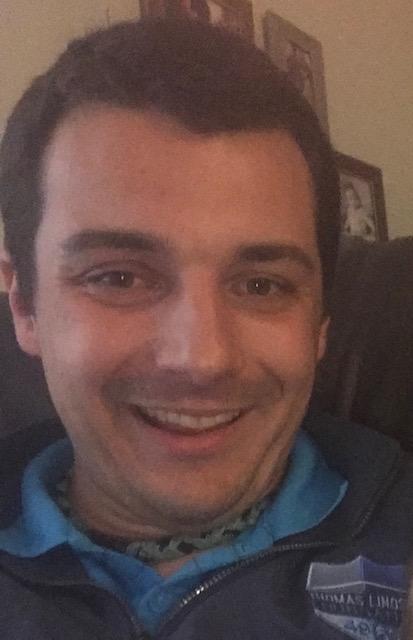 Past season performance has a strong relationship with future season valuation in fantasy football. Points scored, seasonal finishes, and per-opportunity scoring are commonly used by fantasy owners to evaluate a player in the next season.

But that doesn't mean that every stat from the past season is going to be consistent from one year to the next. Sometimes the most useful way to use a stat to project a player is to understand how little it correlates with performance in the future.

For wide receivers, there's a big one on the efficiency side of things.

Points Per Target Are Random Year to Year

A critical area to find players undervalued by these common metrics are wide receivers with low points per target. 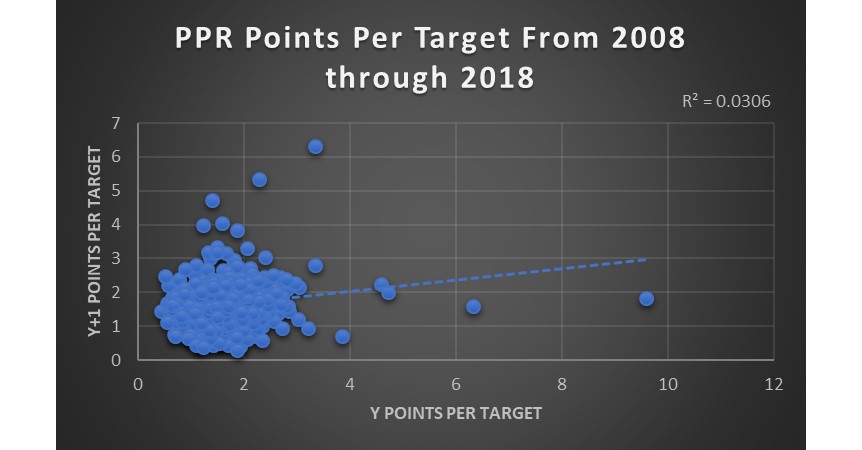 The r-squared does not get much more significant if we set minimum target cut-offs either.

Below is a chart of the r-squared beginning at a minimum of 50 targets and increasing by 25. To qualify, a player would have had to meet the threshold in back to back seasons between 2008 and 2018. The second column shows the r-squared and the final column shows the number of players who qualified under the sample.

Notably, at no point is the r-square higher than .09, indicating even at higher thresholds and with better players, a player's points per target in one season are not a good predictor for the next season. Essentially, they are two random events.

If players produced consistent numbers year over year, there would be reason to believe it is a skill we can bank on belonging to the player. Since there is little correlation league-wide, the numbers suggest there is a lot of luck and little skill in producing points per target.

With the lack of correlation, looking to low point-per-target wide receivers from 2018 can help find prime opportunities for positive regression for 2019.

Crabtree is still a free agent after a disappointing season in Baltimore. If he remains unsigned and retires after a down 2018, it will be on an unlucky final note.

Landry is in his second season with Baker Mayfield with the Cleveland Browns but faces added competition for targets from former LSU teammate Odell Beckham. Landry has been a high-target player in his career, with 112, 166, 131, 161, and 149 in his first five seasons in the NFL. The added competition from Beckham and continued development of David Njoku could drop Landry to a lower target total than his 149 from 2018, but he could easily make up the fantasy points with regression toward a league-average yards per target market. For instance, he could replicate his WR19 finish on 121 targets at the league's average efficiency (1.81 points per target) from last season.

Zay Jones is in an interesting space in the Buffalo Bills offense. The Bills added John Brown and Cole Beasley in free agency and return undrafted free agent Robert Foster, who was a revelation as a rookie. Jones showed rapport for with rookie Josh Allen late in the season, but sorting through the added competition is critical to Jones’s progression in his third season.

Golden Tate was traded during the season from the Detroit Lions to the Philadelphia Eagles and then landed with the New York Giants as a free agent for the 2019 season. The Giants are without Odell Beckham in 2019 and lack a true number one receiver. With recent thumb injury to Sterling Shepard and torn ACL for Corey Coleman, Tate can approach 120 targets, a mark he's hit in four of his last five seasons. With even league-average efficiency, those targets could easily have him among the top 24 wide receivers in fantasy football.

Corey Davis is arguably the most undervalued receiver in fantasy football. He has had a less-than-ideal start to his career, but he projects as a number one receiver for his team. He missed five games as a rookie, and his quarterback Marcus Mariota has been plagued by injury and struggled when playing. The Tennessee Titans have not thrown with high volume, with 496 attempts in 2017 and 437 attempts in 2018, the fifth and second-fewest in the league, respectively.

Yet, Davis had a 25% market share of targets in 2018 and managed a to finish 28th in fantasy scoring among wideouts despite unlucky efficiency. This WR28 finish represents a cement floor for Davis's fantasy prospects going forward.

Davis has had bad breaks in the early part of his career, but represents a massive opportunity to buy positive regression in 2019.

The randomness of points per target is important across fantasy analysis, and regression candidates are valuable players to target.

The principle can be applied when looking at preseason rankings or projections as well. Keeping in mind that the average target is worth around 1.66 fantasy points and that varying from that average is not something that looks to be inherent to a player's skill, we should be far more concerned with volume projections than with efficiency

Targets are the fuel for wide receiver fantasy scoring, and players projected for high targets but low efficiency could make for valuable fantasy assets thanks to the high-variance nature of points per target.

The Late-Round Fantasy Football Podcast, 10 Trends to Know for Week 14