Thursday Night Football Betting: Our Model Likes the Patriots Against the Bills

Injuries headlined every Week 14 article this past week while the weather took a back seat. The Baltimore Ravens-Buffalo Bills matchup featured sustained winds at 22 MPH, but the primary story was the minor quadriceps injury sustained by Lamar Jackson. The team’s quick turnaround for Thursday Night Football created a dilemma for overly worried fantasy managers in the playoffs, but cooler minds prevailed as the leading-MVP candidate finished with 37.1 points to kickoff Week 15.

A similar situation occurred last Monday night. The New York Giants-Philadelphia Eagles game had a forecast indicating approximately 0.05 inches per hour of rain throughout the game. Models ahead of the game began to boost that rate to nearly 0.08 inches per hour, indicating some concern for field conditions. The grounds crew had it covered -- literally. While in-game conditions varied (0.02 to 0.06 inches per hour), the Eagles’ offense was decimated by injuries. The rain certainly didn’t help, but Philly's injury woes likely played a larger role in the low-scoring affair.

Prioritizing relative offenses and their defensive matchups over weather in most suboptimal conditions has been the mantra throughout the season. It’s when the forecast begins to trend toward extreme conditions or stadium designs boost weather effects that other fantasy options should be considered. We’re into the semifinals and start/sit decisions can make or break your season. The "start your studs" logic shouldn’t be blindly followed along with an overestimation on how weather may affect a game.

With that, let’s dig into the upcoming slate for an insight into any concern we should have in Week 15.

Below are the games with weather concerns headed into Week 15.

Two games with light winds, but the current forecast doesn’t carry much concern.

Projected winds speeds in the Vikings-Chargers contest are shown below.

The max speed usually generates some worry, but the decaying velocity boosts increases our optimism that any negative effects will largely be avoided. It’s more applicable to look at Kirk Cousins’ performances in high-wind games over the last two years as the Washington and Minnesota offenses operate differently. Regardless, the results have been similar.

Cousins has exceeded his seasonal average for pass attempts in every game with wind speeds over 15 MPH. He’s averaged 19.42 fantasy points across those games, but it is noteworthy that his yards per attempt average drops to 5.91. However, with the probable return of Adam Thielen, Cousins’ options in the short-to-intermediate passing game become more plentiful, aiding the signal caller's fantasy outlook.

Philip Rivers finds himself in a similar situation. He has Keenan Allen, Hunter Henry, Melvin Gordon, and Austin Ekeler to help in the short game should poor conditions force the Chargers to adjust. Luckily, we haven’t seen that from Rivers so far in windy games. His volume and efficiency has either met or exceeded seasonal averages in all performances, negating any concern associated with the upcoming game. Unless wind speeds increase, fantasy managers should be able to approach this game focusing solely on the offensive and defensive analysis associated with each team.

Conditions in MetLife Stadium are shaping up similarly.

With wind speeds slightly exceeding the threshold, our approach can remain the same. The primary focus is on the related injuries. Daniel Jones is expected to sit, and both DeVante Parker and Albert Wilson are still in the concussion protocol.

Eli Manning was able to finish 12th in total Passing Net Expected Points (NEP) in Week 14 after two deep touchdowns to Darius Slayton. Miami has the worst pass defense, per our metrics. Ryan Fitzpatrick carries similar consideration, but he’d need at least Parker for fantasy managers to feel comfortable about the matchup as the Giants were able to generate three sacks against the Eagles in Week 14.

Both games have projected precipitation rates of less than 0.01 inches per hour and a less than 25% chance of rainfall. I’m pointing these out as games to monitor ahead of Sunday should the forecast change as at least three of these teams carry multiple fantasy assets. The main concern is Derrick Henry’s absence from practice. He’s told the media he’ll be ready to go on Sunday, but a hamstring injury combined with a slippery surface (should it rain) may exacerbate the damage. Friday practice reports and Sunday forecasts will be the tell all as the Texans-Titans game has the highest total on the slate.

The cold temperature (12 degrees) doesn’t sound like the best environment for a voluminous passing game, and historical data points us in that direction. 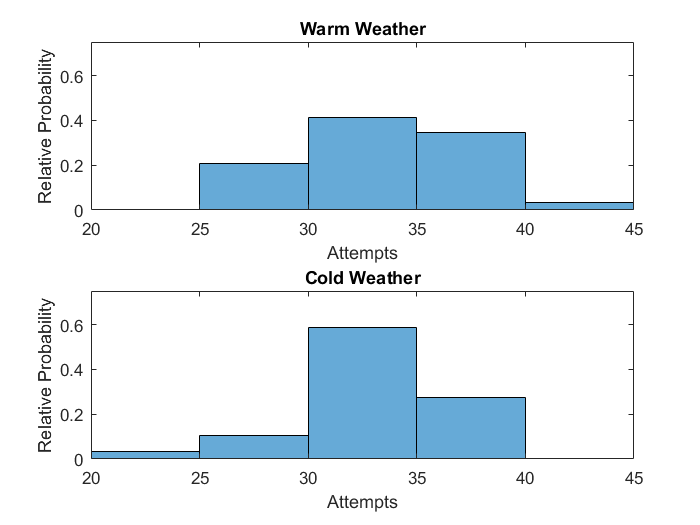 It’s not a significant shift, but attempts are essentially capped for both teams as the temperatures drop. However, the Bears-Packers game already shaped up to be a low-scoring affair without the weather involved. Chicago's D ranks ninth against both the run and pass, per our numbers, and may have Akiem Hicks back from Injured Reserve Either way, Chicago’s defense has been able to limit Aaron Rodgers to pedestrian performances in the past.

In Week 1 of this season at Chicago, Rodgers barely crested 200 passing yards and only threw for a single touchdown. He’s taken two or more sacks in every contest against Chicago since 2016. After a baffling 11.4-point outing in Week 14, it’s fair to question Green Bay’s passing offense, and that's likely the reason for the low game total. The freezing temperature may add context to the weaker performances, but again, the offensive and defensive projections given recent trends should take priority in this game.