In a unique fantasy format, single-game slates feature five flex spots with identical scoring to the main slate. However, kickers are included in these contests, and there is an "MVP" roster slot. The MVP receives 1.5-times his total fantasy points, making this spot crucial.

Our Brandon Gdula has done a deep dive on single-game strategy, and we have projections for the single-game slate if you select the game from the slate tab. It's worth checking out both of those things before you make your lineups.

This week, DIRECTV is introducing the DIRECTV Sunday Night Showdown, a daily fantasy football contest on FanDuel awarding $10,000 in cash prizes based around the most exciting part of the week: Sunday Night Football.

The higher up the leaderboard your single-game lineup finishes, the larger share of $10,000 you’ll win. It’s that simple. 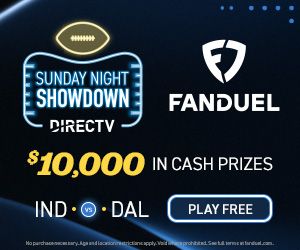 Dak Prescott ($16,000): In an efficient offense ranked seventh in scoring and 26th in pass percentage (51.5%), Prescott stands as tonight's top option with 18.3 expected FanDuel points including 21.8 completions for 227.5 yards and 1.8 touchdowns. While the Colts rank 13th in fantasy points allowed per game to quarterbacks (16.2), Indianapolis has allowed the fourth highest completion percentage (68.3%) and 6.6 FanDuel points (23rd) in the red zone to the position.

Jonathan Taylor ($15,000): Indianapolis' top offensive option leads tonight's slate in scrimmage yards (104.4), touches (19.9), and expected touchdowns (0.64) while also ranking second overall in fantasy production (15.2 FanDuel points). Despite ranking sixth in fantasy points allowed to running backs (17.6), the Cowboys have given up plenty of rushing production to the position, allowing 23.4 attempts for 105.3 yards on the ground.

CeeDee Lamb ($14,000): Ranking first on his team in receptions (5.9), receiving yards (71.2), and targets (8.9), the Cowboys' lead wideout will have a tough matchup versus a Colts' team ranked first in FanDuel points allowed (20.1) per game to wideouts. According to Sharp Football, Lamb is targeted 28.3% of his routes versus zone defenses which the Colts deploy 73.2% of their defensive plays.

Matt Ryan ($14,500): In a challenging opportunity against a Dallas defense ranked fifth (13.5) in FanDuel points allowed per game to quarterbacks and first in opposing passing yards (177.7), Ryan stands fourth overall with 13.4 expected fantasy points including 22.8 completions for 1.0 touchdown and 229.3 passing yards. While the Colts' offense rate sixth overall with a 62.4% pass percentage, they have slowly started to rely less on their veteran quarterback, averaging 31.3 pass attempts and a 55.7% pass play rate in his last three starts.

Tony Pollard ($13,500): Despite a recent decline in his offensive snap percentage, Pollard has still taken the lead in the Cowboys' backfield, producing 20.5 touches for 125 yards in his past two games. In an underrated spot versus an Indianapolis' unit allowing 20.6 FanDuel points to running backs including 29.7 touches for 132.6 scrimmage yards, numberFire's models project Pollard to score 10.9 FanDuel points.

Ezekiel Elliott ($12,000): After missing time with a knee injury, Elliott has remained an important factor in the Cowboys' running game, averaging 15.5 carries for 67 yards in his past two appearances. The 27-year old has seen plenty of work when his team has been in prime scoring position with 11 touches inside the opposing ten-yard line and eight inside the five.

Alec Pierce ($7,500): Despite inconsistent volume, Indianapolis' rookie wideout has registered at least a 70% offensive snap percentage and a 93.5% route percentage in three of his last four games. Pierce stands as his team's third ranked pass catcher with 2.7 receptions for 33.5 targets on 4.4 targets.

Dalton Schultz ($7,500): In a sneaky opportunity against a defense giving up 4.4 receptions for 46.9 yards on 5.9 targets to his position, Schultz rates second on his team in receptions (3.8) and third in targets (5.1) and yards (37.0). The fifth year tight end is averaging 5.2 receptions for 48.7 yards on 6.3 targets this season when playing with Prescott under center.