No, It's Not Time to Buy a Darren McFadden Cowboys Jersey

This can't be -- and likely isn't -- the Cowboys' answer to replace last year's Offensive Player of the Year. If it is, then I have no idea what they're thinking.

Darren McFadden wasn't always bad at football. I mean, sure, the last time he was above average according to our advanced metrics was when Brett Favre was still in the NFL, but his entire career hasn't been Trent Richardson-like.

But over the last three years -- the three coming after a foot injury that sidelined him for the second half of the 2011 campaign -- McFadden has been the absolute worst running back in the NFL.

Let me explain. Here at numberFire, we use a metric called Net Expected Points (NEP) to help evaluate how good or bad a player performs. You can read and learn more about NEP in our glossary.

Rushing is less effective than passing, and since both are being related to expectation, passing (and receiving) numbers are naturally higher than rushing ones. While most quarterbacks see positive NEP values, a lot of running backs see negative ones. It's especially common for a high-volume back to see a negative Rushing NEP total, as he's consistently getting little gains with each tote.

With that being said, we can still compare running back to running back to see how effective certain players are. Just how bad has McFadden been over the last three seasons? Horrendous. 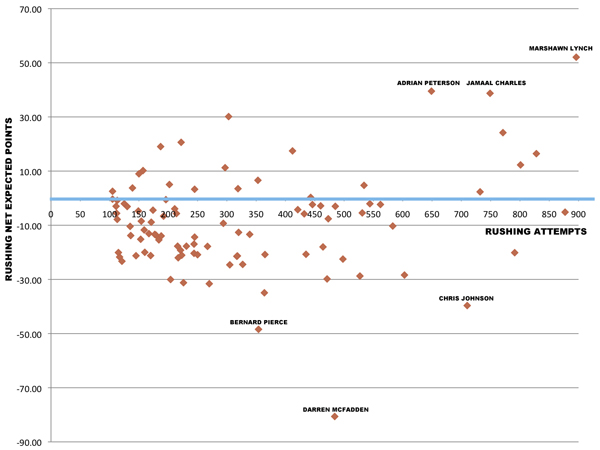 The graph above depicts every running back who has rushed the ball 100 or more times since the start of the 2012 season versus their Rushing Net Expected Points totals. As you can see (or perhaps you can't since it's small), Marshawn Lynch leads the pack with over 52 Rushing Net Expected Points, while Adrian Peterson and Jamaal Charles rank second and third, respectively.

On the flip side, you see a massive outlier. That outlier is Darren McFadden.

Over the last three seasons, DMC has accumulated a -80.62 Rushing NEP total, which is over 30 expected points worse than the second-worst rusher, Bernard Pierce. The dot in the plot above who ranks third-to-last, for those wondering (or can't see), is none other than Chris Johnson.

Even when you factor in receiving, McFadden is 23 expected points worse than any other running back in the NFL over this time.

If you want to blame McFadden's poor play on a bad offensive line, be my guest. But know that, in each of the last three seasons, the back in Oakland who was closest to McFadden in attempts has far outperformed him on a per-rush basis. In 2012, Marcel Reece's 0.01 Rushing NEP per rush average was 0.20 expected points better than McFadden's -0.19. In 2013, Rashad Jennings outproduced McFadden by a whopping 0.22 expected points per rush. And last season, Latavius Murray was 0.20 Rushing NEP per attempt better than McFadden.

Considering the best 200-plus attempt rusher last season, Jamaal Charles, saw a Rushing NEP per attempt of 0.11, the differences between McFadden and his Oakland teammates within the metric is staggering.

So no, we shouldn't be optimistic about him in Dallas, even if it's behind the best offensive line in the league. Darren McFadden isn't the back we all have wanted him to be.

The Writing on the Wall: DeMarco Murray Is a Philadelphia Eagle