What Can Maxx Williams Bring to the Baltimore Ravens' Offense?

"With the 55th pick of the 2015 NFL Draft, the Baltimore Ravens select Maxx Williams, tight end from the University of Minnesota".

Congratulations Baltimore fans. You've got yourself a great one.

The 6'4", 249 pound athletic tight end has been clamored to be head and shoulders above the rest of his class in terms of talent. The 21-year-old rookie's draft hype may have been slowed down by a sub-par performance at this year's combine, but make no mistake about it -- Maxx Williams has the skill set to become a longtime NFL starter.

While he may be the prospect with the highest ceiling of this year's tight end class, Williams does still have his flaws. He's not an other-worldly type physical specimen in the mold of a Rob Gronkowski-type player. In fact, he tested pretty poorly when compared to other tight ends. 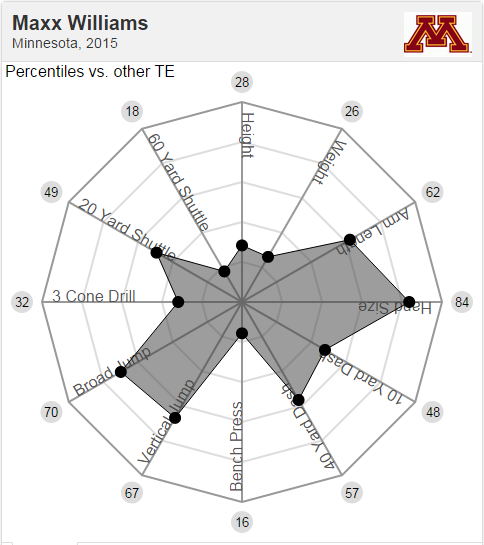 Williams' physical traits didn't exactly set the combine on fire, as he had fairly middling scores all around, as shown via MockDraftable.com. His speed, agility, and explosion scores are all average to below average which may have factored into where he ultimately landed towards the end of the second round.

However, even with a poor combine performance, it's Williams' game that separates him from his peers in this 2015 draft class as he brings plenty of positives to the table.

Maxx Williams was an incredibly productive player for the offense he was in, compiling 36 receptions, 569 receiving yards, and 8 touchdowns as a red-shirt sophomore. Consider the fact that he came from a team that ran the ball with the eighth-highest rushing play percentage out of all FBS teams -- Minnesota ran the ball 68.67% of the time -- and you see that Williams was an integral part of the Golden Gopher's passing attack.

Possessing good, but not game-breaking speed, Williams is able to stretch defenses and allow him to work the seam. He's also more athletic than what showed up in his combine numbers, possessing very good body control when reaching up and extending for the ball. Brimming with confidence, Williams has strong hands that can help him win at the catch point and can fight through contested catches in tight coverage.

With a high work ethic and a nasty side that shows up in the blocking game, Williams will fit right in with in the rugged AFC North and their style of play.

How Does Maxx Williams Fit with the Baltimore Ravens?

Trestman is known for his pass-friendly offenses and implementing a lot of short passes as both Matt Forte and Martellus Bennett had career years in receptions in 2014 in Chicago. Maxx Williams can expect to be an integral part of Trestman's offense along with new teammate Breshad Perriman, if both can catch up to the playbook before training camp.

Former starter Owen Daniels vacates his 79 targets and his 15th-ranked Reception Net Expected Points (NEP) among all tight ends last year as he follows Kubiak to Denver. Williams has a chance to secure the starting role immediately. As Dennis Pitta still works back from injury with his career in question, Williams faces only surpassing last year's third-round pick Crockett Gillmore on the depth chart, who was unable to make an impact in his rookie season. Given Williams' pedigree and penchant for big plays, it wouldn't be surprising to see him enter atop the depth chart for Week 1.

If you're hoping Williams can breakout from a fantasy perspective, I'm sorry to disappoint. Over the last decade, there have only been two tight ends that have posted TE1 seasons (top-12) in PPR leagues during their rookie seasons -- Rob Gronkowski in 2010 and Heath Miller in 2005. Tempering expectations of Williams' rookie season to TE2 outings with a possibility of TE1 performances sprinkled in would be a more realistic outlook.

What the Ravens are really banking on with Williams is whether or not he can continue to overcome his physical limitations and outproduce like he did when he dominated the BIG10 with Minnesota. He's still incredibly young -- Williams just turned 21 a couple weeks ago -- and it's important to keep in mind it isn't until year two or three that most tight ends can fully develop into full-time starters.

Time will tell, but for now the Ravens can breathe a sigh of relief hoping they have themselves the next Todd Heap on their hands.