Thursday Night Football Betting: Our Model Likes the Patriots Against the Bills

Leonard Williams: No Respect, But the New York Jets Halt the Slide

It seems like every year, the defensive players just get no respect in the eyes of the fans, the media, and even the teams drafting in the NFL Draft. This year is no different. Though many scouts agree that USC defensive lineman Leonard Williams is out-and-out the best, most game-changing talent in the 2015 class, due to the fact that he plays a defensive position, a pair of quarterbacks were selected in front of him. I'm sure I've made this joke before, but it bears repeating: since numberFire doesn't generate READ comparables -- based on Combine data and likely team situation -- for defensive players, my best comp for Williams is Rodney Dangerfield -- no respect.

The appeal of Williams has many layers. First of all, he has excellent length, good athleticism, and absolutely elite power. Williams didn't blow anyone away at the NFL Combine, but his performance was still impressive in its own right, and did more to confirm his high talent than redefine it. The generous folks at MockDraftable have concocted spider-graphs of each player's Combine performance, which shows it in the context of historical percentiles. This is seen below. 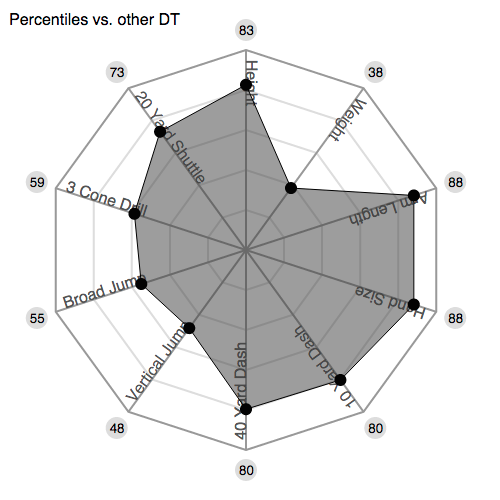 One of Williams' biggest assets is his speed, as he ranked in the 80th percentile both in the 40-yard dash and the 10-yard split. This is largely where his power comes from, as Williams is a bit smaller than most other interior defensive linemen at 6'5'', 302 pounds. By using his speed as momentum and power -- not to mention ability to get leverage underneath offensive linemen and drive them back -- Williams not only has the speed to keep opponents on their heels, but also the ability to adapt that trait.

His other measurables show a bit of a mixed bag, however. His two other "explosiveness" tests, the vertical and broad jump, were not nearly as impressively performed as his dash times. This indicates that perhaps his quick-twitch muscles are not elite, the way one would hope for in an outside pass-rusher. This doesn't concern me, however, as his speed metrics again show a player who gets up to a good head of steam. In his role, one doesn't need elite quick-twitch skills. His change-of-direction, or "agility" tests also are split; a solid 73rd percentile in the 20-yard short shuttle is heartening for a player who -- playing on the interior -- will have to create room to maneuver, but his three-cone time is just average. Again, however, his Combine didn't need to elevate him, it just had to confirm his talent.

Williams' other huge draw is a phenomenal versatility to play almost every single position on the defensive line. His most natural position will likely be as a 3-technique defensive tackle (also known as a 4-3 undertackle), which is the same pass-rushing, penetrating position that players like Geno Atkins and Gerald McCoy play. This is a position that demands freakish athleticism, and a slightly smaller frame actually is a boon, so that it becomes easier to slide through the B gap - between the offensive guard and offensive tackle - and get to the passer. He can also play a pass-rushing, disruptive 5-technique, better known as a 3-4 defensive end -- due to his immense strength -- and even kick further inside on passing downs.

How Does He Fit With New York?

There couldn't be a better fit with my metaphor about Rodney Dangerfield, that's for sure, but Leonard Williams will be no vaudevillian comic under the bright lights of Broadway. It makes sense that Todd Bowles and the New York Jets took him based on scheme fit: in a versatile hybrid front, Williams' ability to move all over the line will be a huge boon. It also makes sense that they took him based on value: if the top talent in the draft falls to you, you take him. Yet, based on need, this pick is slightly lacking. With Sheldon Richardson, Damon Harrison, and Muhammad Wilkerson making up the starting defensive line, will Williams be able to see much playing time? Perhaps this is a commentary on Wilkerson's future with the team, as rumors have had him on the trade block for at least a week now.

Williams does provide immense potential to disrupt and make plays. His athletic talent and scheme versatility make him attractive to nearly every team, though his one drawback is rawness right now. It's a testament to his natural gifts that he can dominate without yet unlocking his full potential, but the Jets will want to know that they should refine his technical skills even more. MockDraftable also provides physical comps for each player, and Williams' top ones are as follows: Jared Odrick, 2010 (81.1%); Lawrence Guy, 2011 (80.1%); Devon Still, 2012 (78.9%). A mixed bag for sure, but each of these players has had high upside. Williams can be one of the best defensive linemen in the league given some time, and we may soon realize that everyone made a mistake ranking him second -- or sixth -- to anyone.

The Cleveland Browns Made a Hefty Blunder With Danny Shelton