What would have made my Round 3 Draft Day experience complete would have been to see my favorite player (note: not my best player) in this class, with my favorite name that I've ever scouted, be selected in the top 32 draft picks.

This former no-name with a big name has been one of the highest risers in the pre-draft process, and some scouts believed he could have been selected at the back end of the first round. Now that he's been drafted, however, I will be blasting this song for my man Owamagbe "Diggy" Odighizuwa.

As he is affectionately known in my draft notes, Odighizuwa is currently listed as a true 4-3 defensive end out of UCLA. He ranked seventh among defensive ends on Matt Millerâ€™s 2015 Big Board, and 37th overall.

Standing 6'3" and weighing in at 267 pounds, Odighizuwa is on the small side of a well-rounded end but has the length and anchoring ability to be an excellent edge-sealing end against the run. After two hip surgeries, he may no longer have the flexibility to turn the corner as well in the pass-rushing game, but he plays with an immense drive and purpose, has violent hands when battling offensive tackles, and is relentless in pursuit of the play.

It's clear that Odighizuwa is not the most supremely talented edge player in this class, but he has a fire that belies his lesser natural gifts. His MockDraftable spider-graph as a defensive end is somewhat interesting. Check it out below. 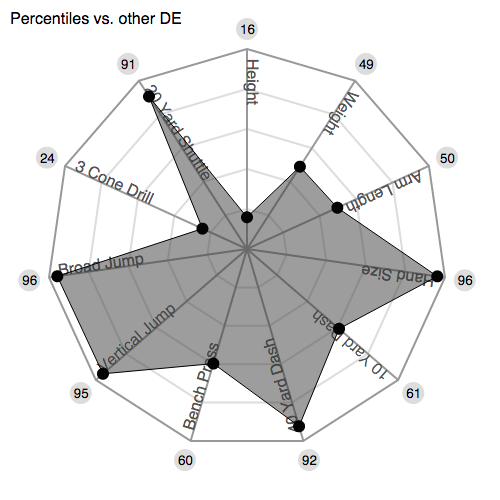 He does lag in the physical size measurables and in -- go figure -- his change-of-direction via the three-cone drill. Note, also, that he was only in the 61st percentile in the 10-yard split, meaning that he may have little initial burst. Fortunately, his broad jump and vertical jump were exceptional, so we can perhaps be less concerned by this one data point.

How Does He Fit With the Giants?

After waiting through two rounds, Odighizuwa was selected 74th overall by the New York Giants. Selecting a defensive end is a highly logical move, as Odighizuwa will likely be groomed into either the starter opposite or replacement for Jason Pierre-Paul, who still has not signed a long-term deal with the franchise after being franchise-tagged this offseason.

The Giants, too, are still looking to rebuild the monstrous pass-rush unit that terrorized quarterbacks in the late 2000's with the likes of Justin Tuck, Mathias Kiwanuka, and Osi Umenyiora. Last year, the Giants ranked a middling 22nd in team Adjusted Defensive Passing Net Expected Points (NEP), indicating that their pass-rush unit may not disrupting quarterbacks as much as it should. NEP

The one downfall here is that "Diggy" is tight in his hips after two surgeries there and just might not have the agility to bend the edge and really maximize his pass-rushing potential with the Giants. If they're hoping to let third-year starter Damontre Moore go wild in time and be the primary rusher, then Odighizuwa could be a complementary edge-setter, but hopefully they know his limitations going in.

Atlanta Spends Its Top Pick on Vic Beasley: How Can He Help the Falcons?

Dante Fowler Jr. Is a Jaguar: How Does He Fit?