World Cup Betting Guide for Wednesday 11/30/22: Will Argentina Stay on Track and Advance?

Will Eric Ebron Make the Second-Year Leap for Detroit?

Joseph Juan  —  @FF_Scientist May 20th, 2015
Share on Facebook Share on Twitter
After a disappointing rookie season, can Eric Ebron bounce back this year and show everyone why the Detroit Lions selected him with the 10th overall pick in 2014?

In a draft class absolutely stacked at the wide receiver position, the Detroit Lions opted instead to use the number 10 overall pick of the 2014 NFL Draft on a player many deemed to be a generational talent at tight end: North Carolina Tar Heel Eric Ebron.

They passed on the likes of Odell Beckham, Jr. and Kelvin Benjamin with visions of Rob Gronkowski and Jimmy Graham in their minds.

And at the time we could hardly blame them for it.

An accomplished receiver coming out of college, Ebron's 895 yards receiving during his junior season broke the ACC record held by 49ers tight end Vernon Davis. His 6' 4", 250 pound frame mirrored that of some of the most successful pass catching tight ends in the league including Jimmy Graham and Antonio Gates. And with Calvin Johnson and Golden Tate manning the outside, his 4.6 40-yard speed and impressive catch radius filled the Lions' needs for a playmaker both down the seam and in the red zone.

But perhaps the Lions asked too much, too soon of the young tight end. With all eyes on Ebron in his debut season, Eric only managed to put up a paltry 248 yards receiving on 25 receptions and a single touchdown.

Now in a pivotal year of his young career, the question on everyone's mind is whether Ebron will justify the high draft pick Detroit spent on him last season by making the second-year leap other tight ends have made before him, or if he will fall through the cracks as just another talented, first-round player unable to make the transition to the pros?

First-Year Troubles and the Second-Year Bump

There's no denying that Eric Ebron disappointed last season and failed to meet the lofty expectations placed upon him by the Lions' management and coaching staff. But in order to project expectations of him properly for next season, we must first place his rookie production in the proper context.

It's therefore useful to begin by comparing his first year production to that of other NFL veterans who most closely resemble Ebron's physical profile.

When we look through the list of tight ends since 2000 that fall within 5% of Ebron's measurables, we find a list of notable names with varying levels of success in the NFL including Ed Dickson, Todd Heap, and Fred Davis.

Looking at the numbers these tight ends produced in their first year in the NFL, we find that Ebron actually fared better than all three of these players on average.

Indeed, Ebron topped the best rookie tight end of the group, Todd Heap, whose 16 receptions, 206 yards, and one touchdown fell more than 20% behind Ebron's figures from 2014. Beyond this, Ebron nearly doubled the combined averages for Dickson, Heap, and Davis in their first years in the league.

So while disappointing at face value, it's clear that Ebron's numbers were actually in line with those produced by other rookie tight ends of similar stature to himself.

And how did this group do in their second year in the league? 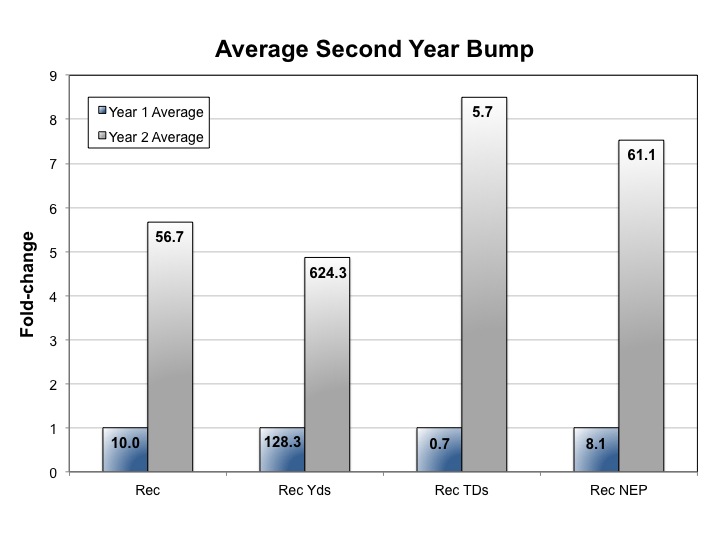 It's evident from the figure above that all three of these players experienced a remarkable boost both in terms of raw statistical output as well as in efficiency as measured by our Net Expected Points (NEP) metric. (NEP is our signature metric which measures player performance relative to expectation. To learn more about it check out our glossary.)

And these large increases from year one to year two in the league for these players actually follows a more general trend described by our own Joe Redemann when analyzing the career arcs of an average tight end in the league.

It therefore wouldn't be unheard of if Ebron made a big jump in production during his sophomore season as well, and the buzz coming from the Lions' camp certainly supports this idea.

General manager Martin Mayhew has said he expects a second-year leap from Eric Ebron, while head coach Jim Caldwell has been quoted as saying he is anticipating a "pretty significant rise" in Ebron's production this season.

With the front office backing him and a coaching staff expecting a rise in his productivity, the potential is there for Ebron to take a significant step forward in his development as an NFL tight end this season.

In terms of support from the coaching staff, Ebron has an ideal person in his corner in offensive coordinator Joe Lombardi. Lombardi spent 2009 to 2013 with the New Orleans Saints where he saw Jimmy Graham blossom into one of the league's elite playmakers at the tight end position.

And in this regard, Lombardi now finds himself in Detroit with a weapon nearly equal to Graham in terms of raw athletic ability. Indeed, both on paper and on the field, Ebron measures up favorably to Graham.

When watching film of the young tight end, it's also clear that just like Graham, Ebron is able to use his physical gifts to dominate on the field.

Ebron can use his strength and explosiveness to break tackles and separate from the defense. He also demonstrates above-average hands for a tight end, making one-handed catches look routine as demonstrated by this play as well as this one. Beyond this, he attacks the ball when it's in the air, using well-timed leaps to high point the ball.

With this in mind, it's interesting to see that the physical similarities between these two athletes even translate to their rookie year productivity.

Both Graham and Ebron had relatively forgettable rookie numbers, both collecting less than 400 yards through the air and a Reception NEP below 40.0.

And just like the tight ends discussed in the previous section, Graham, despite a mediocre first year in the NFL, still experienced an amazing jump in production in his second year in the league, going from less than stellar receiving numbers in 2010, to numbers rivaling those seen by number one wideouts in 2011.

So with all this being said, can we expect a similar leap for Ebron in his second year in the league?

While the size and athleticism of these two tight ends are certainly comparable, their situations are not. Where Graham was the number one receiver in New Orleans in his second season, Ebron projects to be, at best, the third option on his team. Supporting this notion, offensive coordinator Joe Lombardi has already said that he expects Ebron to emerge this year as the number three weapon in this offense behind Megatron and Tate.

So what type of workload can we expect for Ebron in such a role? If we project Stafford to throw roughly 600 passes next season, and if the target distribution stays in line with what Calvin (155), Tate (120), and the running backs (160) all saw in games they were all in together, this leaves about 165 targets for Ebron and the remaining pass catchers on this team to lay claim to. And as the number three weapon on this team, I fully expect him to challenge for anywhere between 60-75% of these targets if his development indeed does follow historical trends.

Not bad at all for a tight end being overlooked in most circles.

When taken at face value -- especially after you take into account the high first-round pick used by Detroit and the massive success of the wide receivers of this same class -- Eric Ebron was a huge disappointment his rookie season. But when we consider the career arcs of other similarly talented tight ends over the years, perhaps it isn't Ebron who underperformed but instead our expectations that need to be checked.

Even when compared to the rookie production of one of the best tight ends of the past decade, Jimmy Graham, Ebron's rookie output is in line with the All-Pro tight end's numbers.

But with two Pro Bowl receivers ahead of him in the pecking order in Calvin Johnson and Golden Tate -- barring an injury to one or both of these receivers -- I don't expect Eric to reach the targets that Jimmy Graham enjoyed as the Saints top option in the passing game in his second season. At the same time, given his on-field talent level and pass catching ability that puts him in a tier above that of tight ends Todd Heap, Fred Davis, and Ed Dickson, I expect their average year two production of 57 receptions, 624 yards, and six touchdowns to be a reasonable floor for Ebron's stat line in 2015.

What Does the Career of an Average Tight End Look Like?

How Valuable Is a Tight End in the NFL Draft?