What Can the Los Angeles Rams Really Expect From Case Keenum?

As anyone who has watched the Dolphins or Bills this century can tell you, finding a good quarterback can be tough.

Ask a Rams fan, though, and he or she will remind you it can be hard to find one who is merely average.

In 2006, Marc Bulger went to the Pro Bowl and the Rams finished 10th in Net Yards Per Pass. Since then, the franchise has been last in the league in passing efficiency, without a single season in the top 20.

Donâ€™t bet on this changing in 2016, as Los Angeles general manager Les Snead told NFL Network Monday that Case Keenum will be his teamâ€™s starting quarterback.

While fans in Southern California might be happy to have NFL football back, this is hardly news that should excite them.

Keenum has been below average in all these categories, except for his sack and interception rates. He deserves credit for the sack rate, but the interception rate has the markings of a sample-size fluke (more on that later).

In terms of our in-house Passing Net Expected Points (NEP) metric, Keenum has cost his team 17.67 points and has averaged -0.04 NEP per drop back. He has been below average on a per drop back basis in each of his three NFL seasons.

He yielded positive NEP and was closer to league average last season, but this was due largely to an unsustainably low 0.8% interception rate.

Hereâ€™s more of what Rams fans can expect from Keenum.

Sorry, people of Los Angeles. This section is going to be short.

The one marketable skill Keenum has shown during his pro career has been his quick release.

At the University of Houston, the 6â€™1â€ quarterback threw for over 19,000 yards, averaged 8.6 yards per pass, and graduated as the all-time leading passer in NCAA history, but went undrafted due to below-average size and â€œaverage-at-best arm strength,â€ according to CBSâ€™ Dane Brugler.

Keenum has generally delivered in this regard, as over the last two years, only Ryan Mallett has a better sack rate relative to the league average (minimum 200 pass attempts).

Last year, he was sacked on 3.1% of his 129 drop backs, which was second in the league among quarterbacks with at least 100 attempts.

Still, he deserves credit here, as he has outperformed his teammates over the past two years. In 2014, while he had a sack rate that was 2.0% higher than Mallett, he also outperformed starter Ryan Fitzpatrick by 2.5%.

Last year, he bested Nick Foles by 0.9%, and this jives with research that indicates avoiding sack rate is a repeatable skill for individual quarterbacks (rather than just being a product of offensive line play).

In 2015, Keenum rode his low sack and interception rates to a solid year that saw him finish with an above-average 6.5 Adjusted Net Yards Per Pass average, and a 0.10 NEP per drop back rate (which was just below the league average of .11).

However, there is almost no way Keenum throws a pick on fewer than 1% of his passes next year, which brings us to…

Only seven quarterbacks in NFL history have played roughly a full season (at least 200 pass attempts) while also posting an interception rate better than 1.0%.

With the exception of Aaron Rodgers (who has a track record of being one of the most accurate passers ever and also might not be human), all of them declined significantly the following year. 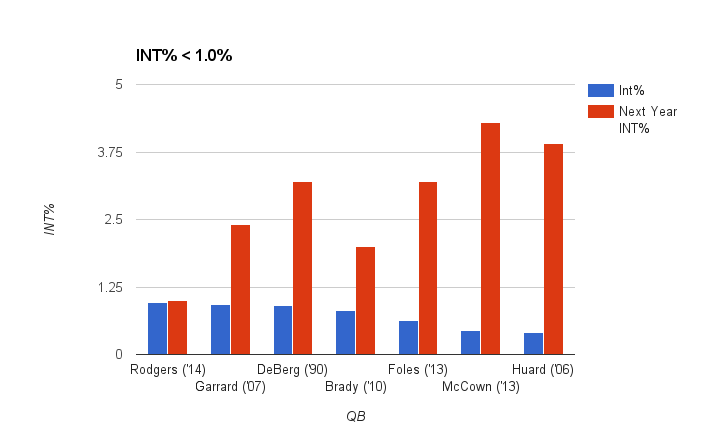 This should make perfect sense, given how volatile interception rate is (and if you needed convincing INT% is prone to variation, look no further than the chart above that includes Foles, Josh McCown and Damon Huard).

This is why we should take Keenumâ€™s 0.8% interception rate on 125 attempts with a grain of salt.

Danny Tuccitto found that interception rate takes over 1,600 pass attempts to stabilize (for our purposes, stabilization rate is the number of attempts it takes for at least half a statisticâ€™s variance to be credited to true talent, rather than random variation).

This is significantly higher than the stabilization rates for other stats, such as yards per pass (396), Passer Rating (221), Adjusted Net Yards Per Pass (326), and even touchdown rate (1,059).

Trying to predict future interceptions can be a foolâ€™s errand, but a better way to do it than using past interception rate is looking at past completion percentage.

Assuming he has no actual talent in terms of avoiding interceptions, Keenum will need to make major improvements across the board to become even an average NFL starter.

As mentioned, his completion percentage has been very low, and relative to the league average, his 56.7% completion rate has been the worst in the NFL since he made his debut.

This was not the product of a boom/bust approach; Keenum averaged just 10.9 yards per completion (this would have ranked 30th had he qualified for the league leaderboard).

Even accounting for his low sack rate, his 6.2 raw Net Yards Per Pass average was below the league mean of 6.4 in 2015, while his career rate of 5.8 is almost one standard deviation below the league average.

If Los Angeles follows through with its plans to start Keenum in 2016, it is easy to see the franchise suffer through another season of subpar passing offense.

The 10 Best Fourth-Quarter Quarterbacks From the 2015 Season

Who Will Be the 2016 Denver Broncos' Starting Quarterback?