World Cup 2022: A Way-Too-Early Look at the Betting Odds

DeForest Buckner is a big, big man. In fact, as Mock Draftable illustrates, heâ€™s one of the biggest defensive ends in the draft since 1999: 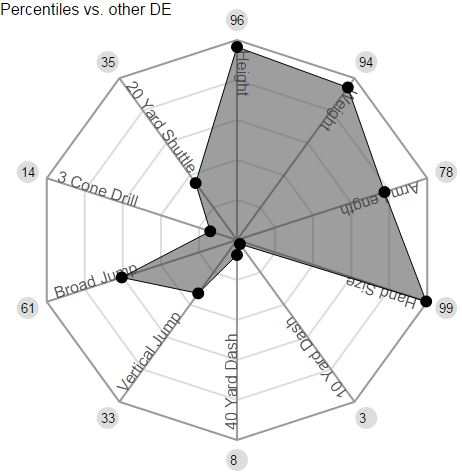 If a 6'7" defensive end out of Oregon sounds familiar, you're probably thinking of Buckner's former teammate Arik Armstead, who went the 49ers with the 17th overall pick in last year's draft. And the similarities don't stop with height.

Rather than enter the draft with his teammate a year ago, Buckner chose to stay in school, and the gamble paid off, as he earned the top grade from Pro Football Focus among all interior defensive linemen in college football last year.

He was a constant disruption to opposing offenses, racking up over 80 tackles for the second year in a row, and led the nation with 67 defensive pressures -- 17 more than Leonard Williams had in 2014 before being selected sixth overall by the Jets in last year's draft.

Buckner was second in the Pac-12 last season with 10.5 sacks -- including 9 over his last eight games -- and was fourth in all of college football with 36 stops against the run.

One of our signature metrics here at numberFire is Net Expected Points (NEP), which measures the value added or lost on each play relative to league-average expectation level. A 10-yard run on 3rd-and-8 should mean a lot more to a player or team's statistics than a 10-yard run on 3rd-and-20, and NEP accounts for that.

At the moment, their starting 3-4 defensive ends are Quinton Dial and Glenn Dorsey. Among all interior defenders last season, Pro Football Focus ranked those two 62nd and 99th, respectively. In 26 combined games, Dial and Dorsey combined for a total of 2.5 sacks.

Buckner is now reunited with Armstead, who managed just 19 tackles and 2 sacks for the 49ers last season. Armstead was referred to by some as a project, and Buckner certainly benefited from staying in college an extra year. Being selected with the seventh overall pick comes with high expectations, and Buckner will be leaned on to make an impact immediately.

Physically, Buckner measures up closely against Calais Campbell, who finished last year as Pro Football Focus' 14th-best interior defender. Campbell had a somewhat quiet rookie year with only 28 tackles and no sacks for the Cardinals before reeling off seven straight seasons with five or more sacks.

Of course, Campbell wasn't a first-round pick, and Buckner will be expected to put up stats closer to Leonard Williams' 63-tackle, 3-sack performance from a year ago.