In Kirk Cousins' first year as the starting quarterback, he didn't disappoint..

Cousins led Washington to the fourth-best passing offense in 2015, according to our schedule-adjusted metrics.

In fact, their Adjusted Passing Net Expected Points (NEP) tally of 151.21, indicating that their passing offense yielded about 150 more points than a league-average one would have, was their best mark in our database (starting in 2000) and was nearly double their second-best result of 78.56 in 2012. You can read more about NEP in our glossary.

Returning for Cousins' second year as a starter are all four of his top receiving options from 2015, including standout tight end Jordan Reed, who just turned in the best season of his career.

His 87 receptions and 952 receiving yards were the most of any Redskins tight end ever in a single season. His 0.73 Reception NEP per target ranked sixth among all NFL tight ends with 50 or more targets. Pierre Garcon and DeSean Jackson are returning to start on the outside, while Jamison Crowder is looking to follow up on his successful rookie year.

Crowderâ€™s 59 receptions was second-best among all rookies in the NFL last season, and his 604 receiving yards ranked fourth in that same group. Niles Paul is also returning after missing all of 2015 with an injury. He was set to play an important role in the passing game last season after setting career highs in 2014 with 39 receptions for 507 yards.

As if that group wasn't good enough, the Redskins used their first-round pick in this year's NFL draft on Josh Doctson, who caught 25 touchdowns during his last two seasons at TCU.

There will be no shortage of capable talent for Cousins to throw to this year, but how evenly will he spread the ball around?

Enough Targets for Everyone?

Of course, Jackson only played 10 games in 2015, so that affects the distribution here. Luckily, using RotoVizâ€™s Game Splits App we can project what the target allocation would have looked like had Jackson played 15 games like he did in 2014.

I also went ahead and adjusted the 2014 output based on the fourth wide receiver, Santana Moss, playing 16 games instead of 10. 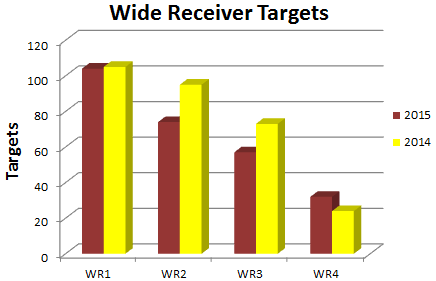 The top wide receiver has been targeted over 100 times in each of Gruden's first two seasons running the team. The second and third wide receivers received significantly more targets in 2014, while the fourth receiver had a bigger role this past season. That is due in part to the declining performance of Andre Roberts.

In the past two years, Reed and Paul have only been healthy together for 10 games. Once again, we can look to see how Reed's output was affected when Paul was in the lineup with him. 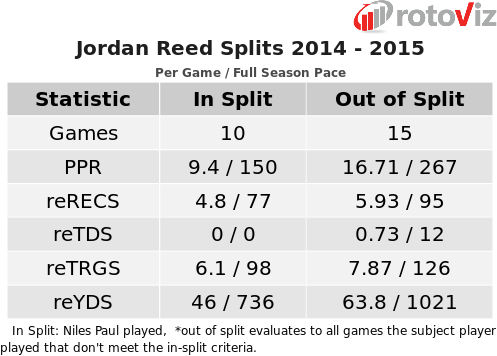 As you can see, Reed maintains his role as the clear top tight end even when Paul is on the field with him, but his production certainly dips.

As of now, Garcon and Jackson are the starters on the outside, with Crowder resuming his duties as the primary slot receiver -- where he ran 76.4% of his routes last season. That's a number that would have been higher had Jackson been healthy for more than 10 games.

In the games that wide receiver expert Matt Harmon sampled for his Reception Perception, Doctson lined up at right wide receiver on 94.3% of his plays. Unless he can impress the coaches enough during training camp to unseat either of the current starters, he will begin the season as a backup primarily on the outside.

Here is how we project the receiving production to be divvied up this season.

After turning in the best single-season performance of any Redskinsâ€™ tight end in history, and with Paul returning to the mix, we project Reed to take a slight dip this year. That still leaves him as our fourth-highest projected tight end, and his upside -- according to our Confidence Interval, which measures the high- and low-end projections for each player -- would leave him behind only Rob Gronkowski in standard fantasy points among tight ends.

Jackson has never led the Redskins in receptions -- and we donâ€™t project him to start this year -- but his big-play opportunities as the resident deep threat puts him atop the Redskins pass catchers in fantasy points in our projections. As long as Garcon maintains his starting role, we donâ€™t expect his output to change much from last year, except his touchdowns decreasing with the emergence of Doctson.

Four of the Washington pass catchers are currently being drafted in standard 12-team, 15-round drafts.

Doctsonâ€™s label as a first-round pick in this yearâ€™s NFL draft has caused people to overdraft him. On average, he is being taken a full round before Garcon, who is starting in front of him and being selected much later than our projections suggest he should. Jackson missed six games last year, which has led people to forget about his back-to-back 1,000-plus-yard campaigns in the previous two years.

While his ADP has him going after only Gronkowski -- where his ceiling could land him -- we also have Reed behind both Greg Olsen and Gary Barnidge in our projections.

With one of the top pass-catching groups in the league, Cousins will have no shortage of options to throw to this year.

But itâ€™s clear that there arenâ€™t enough targets for all of them to be fantasy relevant. At tight end, Reed is a top-five guy and should be drafted as such, while Niles Paul will be best left on the waiver wire to start the year.

For the receivers, both Jackson and Garcon can be had as steals at this point, while Crowder is someone to monitor should one of them have to miss a game. Barring injury to one of the starters, Doctson carries little fantasy value in standard leagues.

Either way, there is opportunity for Washington pass-catchers, and they're almost all being undervalued right now.