Jim Sannes  —  @JimSannes Jan 16th, 2017
Share on Facebook Share on Twitter
The Packers and Cowboys traded jabs late in Sunday's game, with a big play from Jared Cook sending the Packers to the next round. What did the win probability chart from the game look like?

Has your blood pressure chilled out yet from the end of Sunday's divisional round game between the Green Bay Packers and Dallas Cowboys? Good, because we finna make it spike again.

With the Packers' thrilling 34-31 victory to advance to the NFC Championship Game, you know that any win probability charts associated with it are going to look like a heart monitor on acid. This one's absolutely no different, coming via numberFire Live. 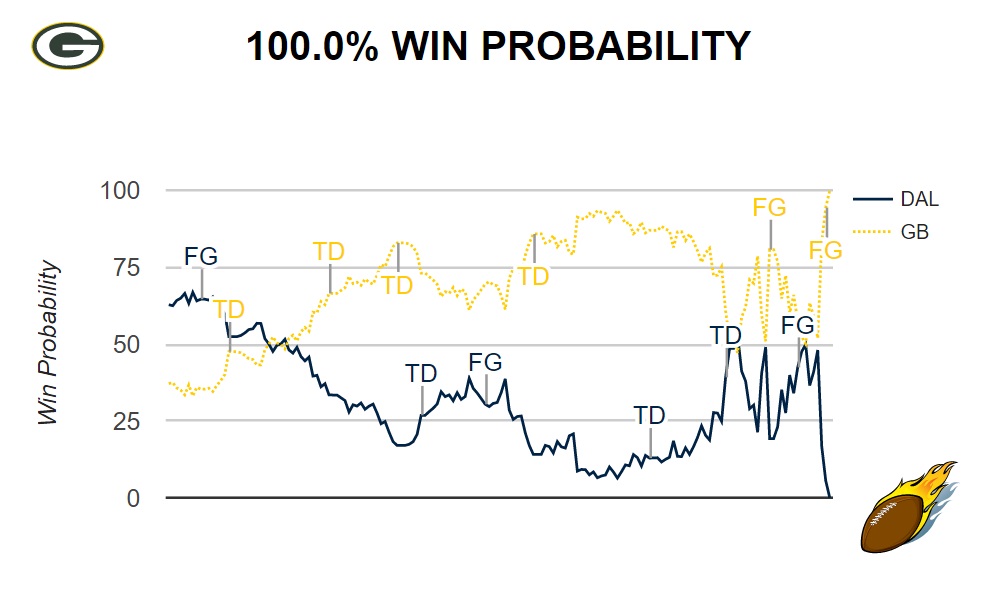 There's tons to go through here, but let's start with the big one.

Before Aaron Rodgers scrambled, juked, jived, and threaded the needle late in the fourth quarter, the Packers' win odds were sitting at 51.92%. Their expected points for the drive were -0.64, meaning the Cowboys may have been more likely to win in regulation than the Packers were. Then Cook caught it.

The Packers have turned Hail Marys into an art, but it's possible nothing they've pulled off the past two years will be more pretty than that play.

Jared Cook's toe-tapping, soul-sucking reception at the 32-yard line jacked the Packers' win odds all the way up to 83.25% with just three seconds left. Mason Crosby finished the rest off with his game-winning 51-yard field goal to send the Packers onto the next round and the Cowboys into a serious bout of self-questioning.

It ended on a down note for Dallas, but they played some big tricks on win probability earlier in the game, too. When they took possession with nine minutes left in the fourth quarter, trailing 28-20, their win odds were just 13.43%. Then, they just kept on chipping away with big play after big play.

The focus will be on the touchdown, but there were plenty of significant plays leading up to that. Here are four of them that helped slowly push the needle toward Dallas' favor.

After seeing this, you could probably guess that Ladarius Gunter's a bit relieved with how the final score turned out.

And Dak does it himself for TWO!

After a Rodgers incompletion on first down, the win odds actually swung in Dallas' favor for a moment at 52.86%. Then, Rodgers went to work with a series of big plays.

It was all Gucci at that point with the Packers climbing all the way to 78.68% win odds after a two-yard carry for Ty Montgomery on first down. Then, he lost five yards on the next play, sending those odds plummeting down 22.10% to 59.50%. Have no fear, though. Crosby's just too good.

When they snapped the ball for Crosby's first field goal, the Packers' win odds were down to 50.94%. After he sent it through the uprights 56 yards later, they were all the way up to 80.74%. This field goal actually did more for the team's odds of winning than the second one did, and this was from further away. Dude was just dripping in sauciness last night.

The Cowboys, of course, made another run at it, getting their win odds all the way back up to 42.43% after Dan Bailey's game-tying field goal, but it was not meant to be. It was a performance for the ages, and the pendulum just happened to swing in the Packers' favor at the end.

This game will and should go down as a classic.

Rodgers and Cook are the obvious heroes, but we can't let Crosby slip through the cracks, drilling two field goals of 50-plus yards and swinging the win odds 46.55 percentage points combined. They've got a tough task ahead in the Atlanta Falcons, but after what the Packers did Sunday, we know they've got the assets to make pretty much anything happen. We could very well be right back here next week, talking about yet another win probability roller coaster for the ages.

Can Sean McVay Rid the Los Angeles Rams of Their Losing Ways?

What Happened to the Cincinnati Bengals in 2016?